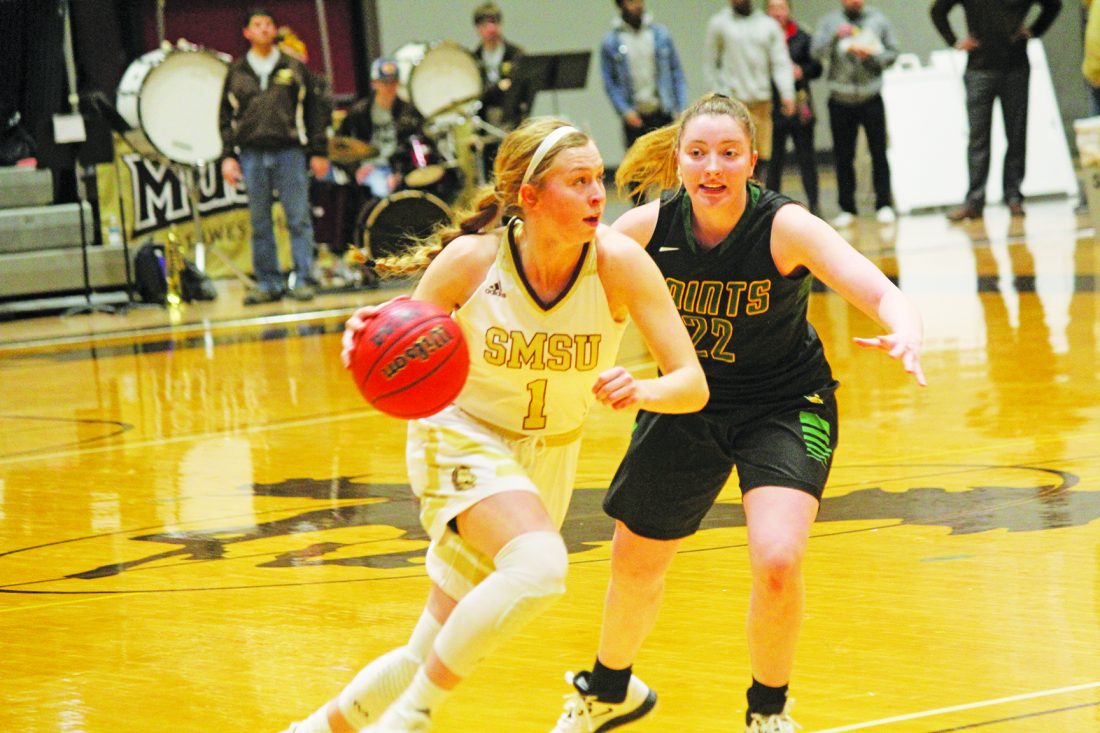 Photo by Jake Przytarski SMSU’s Meleah Reinhart drives past a Presentation defender during their game on Saturday.

MARSHALL – A second-half surge by the Southwest Minnesota State women’s basketball team — highlighted by a 20-4 run in the fourth quarter — guided the Mustangs to their third straight win on Saturday in an 84-46 victory over Presentation College (SD).

Mustangs coach Tom Webb said the team was able to do a better job of getting to the rim in the second half and credits their tempo offensively as the key.

“Tempo (was key). We couldn’t get into a flow early and then we kind of missed some shots, and that just kind of gets you kind of lulled because you’re always playing on the defensive transition situation,” said Webb. “(In the second half) we got to the rim finally and made some shots. (We) finally got to the line in the second half too.”

The Mustangs were slow to get going offensively in Saturday’s contest and, as a result, led the visiting Saints by only three points at the conclusion of the first quarter with a slim 16-13 advantage. If SMSU wanted to create some separation on the scoreboard, they would need a spark.

The team found it in the form of balanced scoring with contributions coming from 10 different players in the first half. Most notably, sharp-shooters Emily Buysse and Sam Wall provided a large boost off the bench with 11 of the team’s 25 points in the second quarter in helping to push the Mustangs lead to 12 by halftime at 41-29.

Webb said the team’s depth allows them to wear teams down as the game progresses.

“We are deep. I think we believe in our depth and I think we really like our depth and we’re not really old either. We only have really three seniors and so our depth is what kind of allows us to press the whole time and to be aggressive,” said Webb. “If you get in foul trouble, you just sub another kid in and you keep going at them and it can kind of wears people down.”

Sure enough, the Saints remained one step behind the Mustangs when play continued for the second half which provided an opening for them to capitalize on. SMSU guard Erin Baxter took full advantage by using her speed to make moves towards the basket before kicking the ball out to an open shooter for a quality three-point shot opportunity.

Reaping the benefits of the open looks was Wall, who remained scorching-hot from the field in the third quarter by knocking down all three of her attempts from behind the arc. As a result, the Mustangs began the fourth quarter with a sizable 63-40 advantage on the scoreboard.

With a comfortable lead in hand, the Mustangs went deeper into their bench and received baskets from Olivia Drummer, Taylor Bonestroo and Lily Schoknecht, who combined to outscore the Saints team in the fourth quarter 8-6. As a team, SMSU outscored Presentation 21-6 in the final 10 minutes of play en route to an 84-46 victory.

Next up for the Mustangs (3-0) is their first Northern Sun Conference game of the season against the University of Sioux Falls on the road on Wednesday at 7 p.m. Webb wants to see his team continue to play fast and aggressive in the upcoming matchup.

“Both teams are going to be battle tested. We just have to play really fast and really aggressive. We have to play free, that’s just how we play so those are things we have to do,” said Webb.