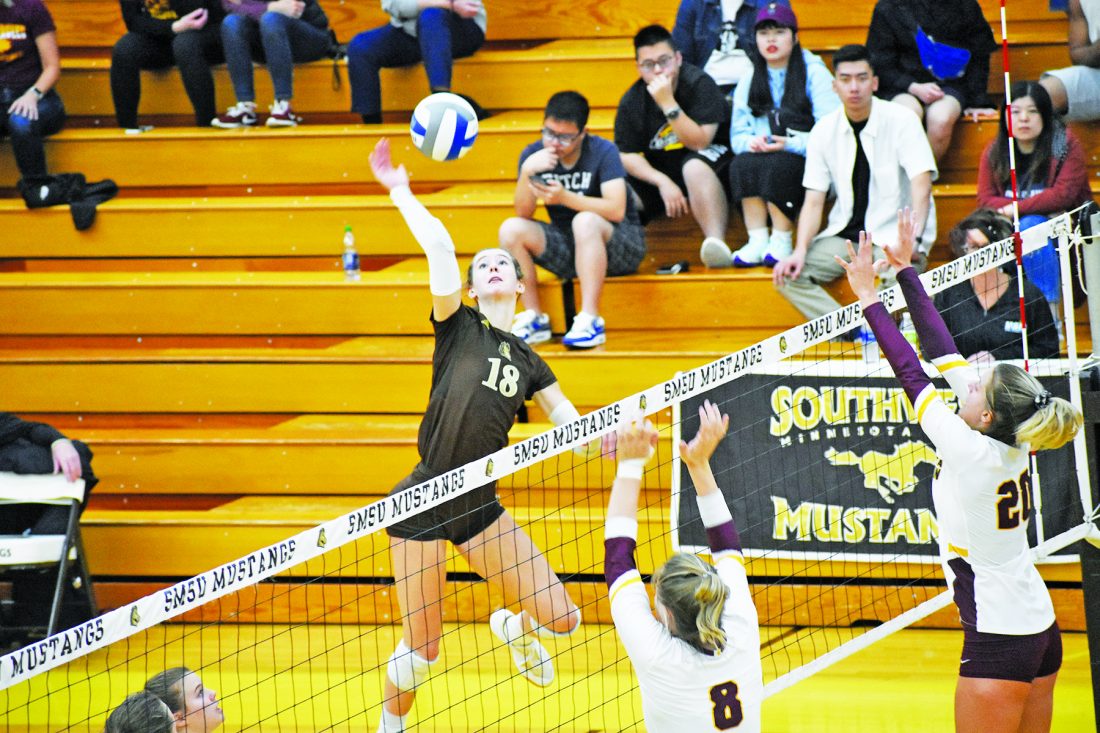 Independent file photo SMSU’s Angela Young goes up for a kill during their Oct. 19 match against the University of Minnesota Crookston.

The all-conference awards are voted upon by the league’s head coaches.

Young, a junior outside hitter from Conde, S.D., leads SMSU with 399 kills, while recording a .249 hitting percentage. She also ranks second on the team with 240 digs, third with 21 service aces and is fifth in blocks with 33. She has racked up double figure kills in 23 of 26 matches, which includes a season-high 26 in victory over Minnesota Crookston on Oct. 19. Young, who has 10 double-doubles on the season, heads into the final weekend of conference play ranking third in the league (NSIC matches only) with 4.29 kills per set.

Schmidt, a sophomore right-side hitter from Jordan, is second on the team with 308 kills, while also ranking second with 57 blocks. She is currently ranked 12th in the conference with 3.14 kills per set. Schmidt has reached double figures in kills 19 times this season, including a career-high 21 versus Northern State on Nov. 8.

Young was also named to the 2019 CoSIDA Academic All-District® 7 team released on Thursday. The selection and announcement was made by the College Sports Information Directors of America (CoSIDA) and recognizes the nation’s top student-athletes for their combined performances athletically and in the classroom.

Young, who earns the award for the first time in her career, was one of seven selected to the all-district team.

Young carries a 3.93 GPA in marketing and communications. She will now advance to the CoSIDA Academic All-America® ballot, where first and second team All-Academic honorees will be selected next month.

It’s the third straight year SMSU volleyball has had a first team Academic All-District honoree and the seventh since 2007.

Southwest Minnesota State, ranked No. 17 in this week’s AVCA Top 25 poll, heads into the final regular season weekend with an overall record of 16-10, including 10-8 in NSIC play. SMSU hosts UMary tonight and Minot State on Saturday afternoon needing to win both matches to have a chance to qualify for the NSIC Tournament starting on Nov. 22.