SMSU VOLLEYBALL: SMSU wraps up season with a sweep over Minot State 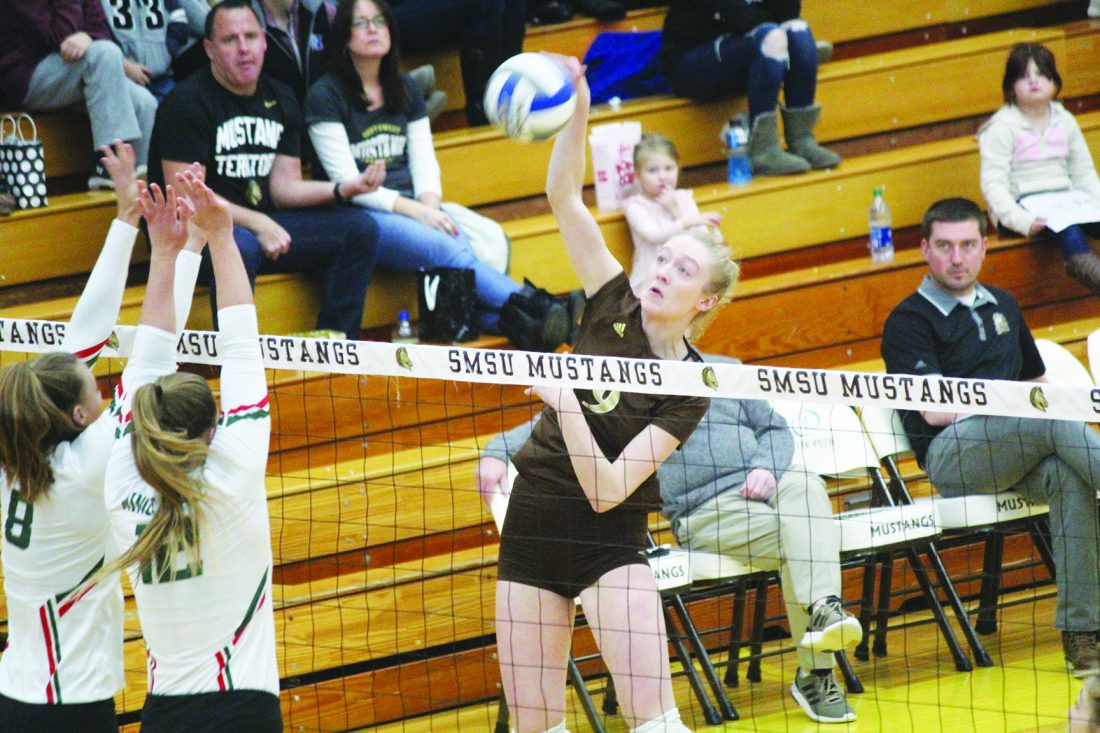 Photo by Jake Przytarski SMSU’s Meg Schmidt connects on a kill during their match against Minot State on Saturday. The Mustangs defeated Minot State 3-0.

SMSU, which won its final four matches of the season, finished in a tie for eighth place in the final NSIC standings, but will miss out for the NSIC Tournament next weekend in Sioux Falls, S.D. Upper Iowa earned the eighth seed with a better strength of schedule points index than SMSU. The Mustangs came up just points shy of the Peacocks, despite SMSU defeating UIU in the only meeting between the two teams this season, while SMSU also defeated league champion Northern State twice.

The Mustangs were led by Sarina Smith who finished the match with 13 kills and a .722 hitting percentage. Junior all-conference honorees, Angela Young and Zoe Lier, finished with 10 a piece on the day.

Emma Thomssen finished the day with 23 kills as she moves up to ninth in the all-time record book at SMSU with 2,116 career assists. Payton Hjerleid led the Mustangs on the defensive end with a match-high 19 digs.

SMSU opened the match restricting MISU to a .087 hitting percentage as SMSU rallied from an earlier deficit to string together two four-point streaks to get a 11-7 lead. SMSU never lost the lead in the first set to finish with a 25-17 set victory.

The Mustangs created their largest lead of the night with a five-point run to advance a two-point lead to a 19-12 advantage. SMSU’s Smith was relentless at the night as she went for three consecutive kills to aid the 25-18 victory to go two sets up on the match.

SMSU then cruised to the match victory as Sydney Omtvedt went to the line to boost the Mustangs on a nine-point streak to end the set unanswered with a 25-12 victory.

Saturday was the last match played in the PE Gym for SMSU’s seniors Erin Corrigan and Jenna Walczak.