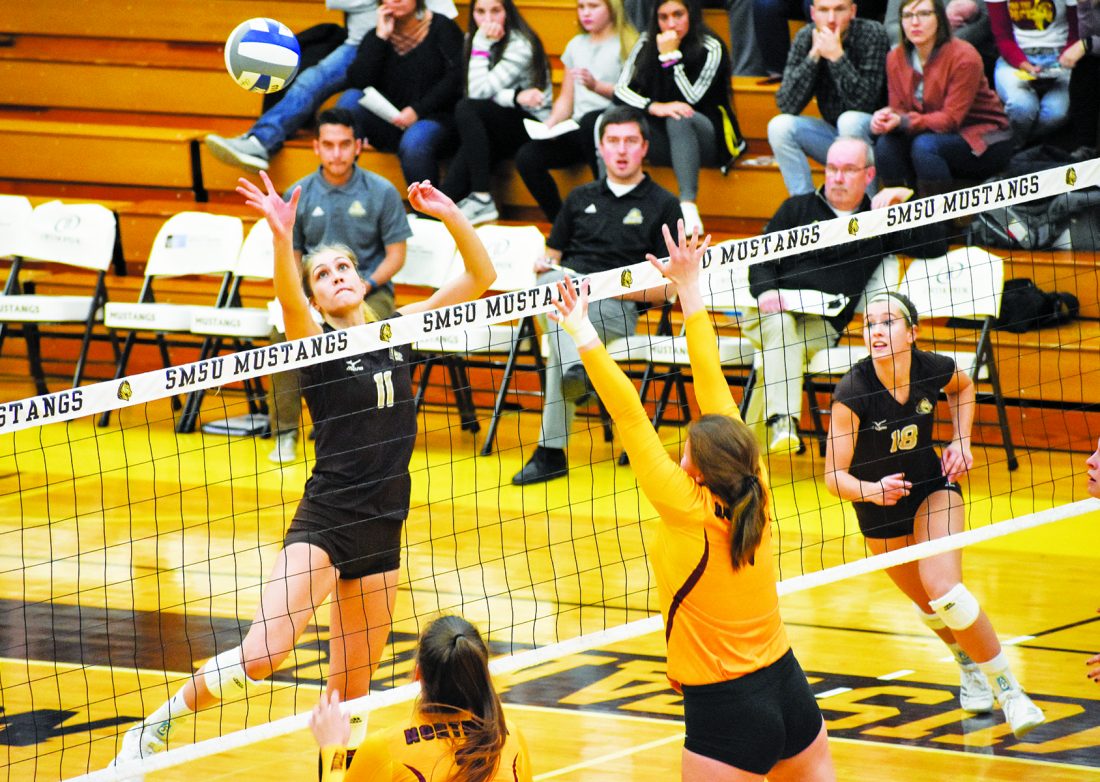 Independent file photo SMSU’s Sarina Smith goes up for a kill during their Oct. 20, 2018 match against Northern State University. The Mustangs will face the Wolves on Friday before taking on MSU Moorhead on Saturday.

MARSHALL — The No. 18 Southwest Minnesota State volleyball team (14-10, 8-8 NSIC) travels for the final road series of the season at Northern State at 7 p.m. on Friday and MSU Moorhead at 4 p.m. on Saturday.

•SMSU went 1-2 after dropping a match to No. 13 Wayne State on Tuesday night in three sets.

•SMSU notched the No. 18 spot in the latest AVCA poll released on Monday, Nov, 4. This marks the 185th poll that SMSU has been featured in the Top-25.

•Junior Angela Young leads the team offensively with 369 kills and a 4.19 kills per set average.

•Emma Thomssen leads in assists with 633 and Alisa Bengen is right behind with 434.

•Payton Hjerleid leads the team defensively with 357 digs and 4.06 digs per set.

•Zoe Lier leads in blocks with 73 including 55 block assist and 18 block solos.

•The Mustangs won the last meeting with a five-set victory in Marshall on Sept. 27.

•Head coach Brent Aldridge in his ninth season holds a 184-74 overall record and 103-56 in the conference.

•Laura Snyder leads the Wolves with 350 kills this season.

•Leading the Wolves defense is Jaiden Langlie with 383 digs and service aces with 33.

•NSU has dropped only two conference matches this season with a five-set loss to SMSU on Sept. 27 and suffered a sweep by Concordia-St. Paul on Oct. 26.

•NSU is one of the eight NSIC schools to be ranked with a No. 7 spot in the latest poll.

•SMSU swept the last meeting on Sept. 28, in Marshall.

•MSUM snapped a six-match losing streak on Tuesday with a four-set victory over UMary.

•Sarah Petrbok leads the offensive with 161 kills and 1.92 kills per set. Petrbok also leads in digs with 245 on the season.

•Teeya Doppler leads the Dragons at the net with 49 blocks, 48 block assists and one block solo.

The Mustangs host UMary and Minot State in the final weekend series of the regular season on Friday, Nov. 15 at 6 p.m. veruss the Marauders and Saturday, Nov. 16 at 2 p.m. versus the Beavers.