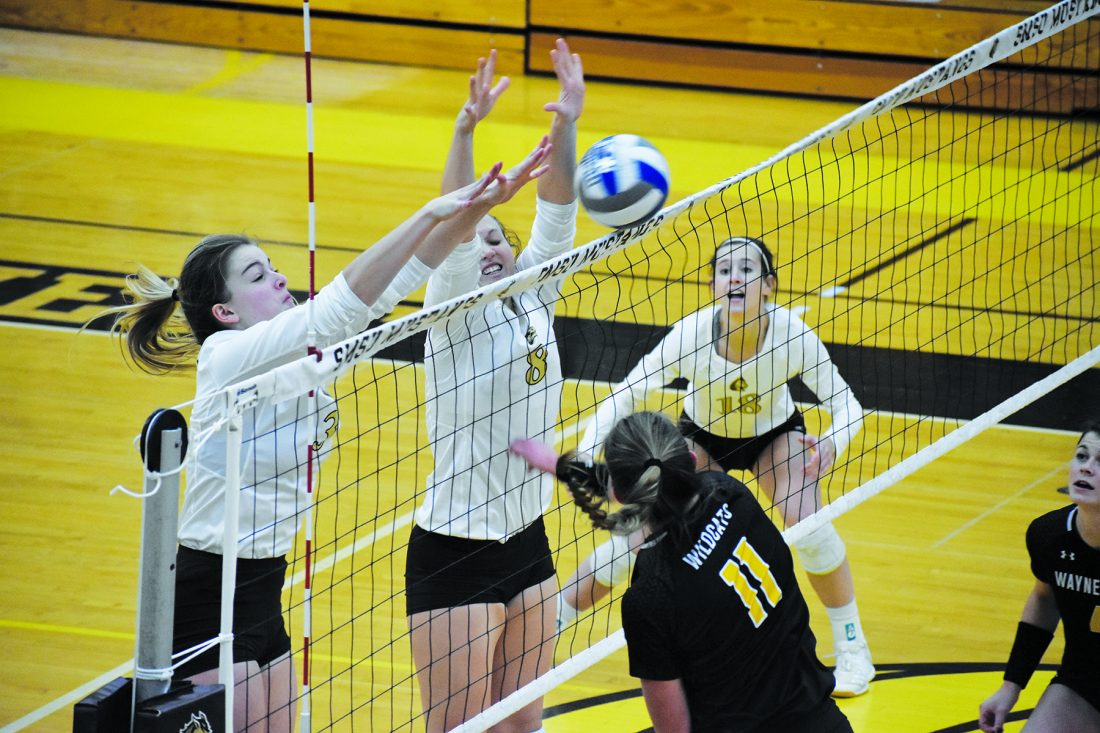 Photo by Sam Thiel SMSU’s Jenna Walczak (3) and Lydia Sussner (8) go up to block a kill attempt by Wayne State College’s Kelsie Cada during their match on Tuesday. The Mustangs fell to the Wildcats 3-0.

MARSHALL — The Southwest Minnesota State University volleyball team entered Tuesday’s matchup against No. 13 Wayne State College looking to not only bounce back into the win column but also avenge a five-set loss to the Wildcats earlier in the season.

SMSU coach Terry Culhane said they committed too many errors on offense and Wayne State’s ability to serve tough was the difference maker throughout the night.

Wayne State got itself into a rhythm early on in Set 1, as the Wildcats opened the match with a 7-1 lead before pushing their advantage to 14-6. The Mustangs would slowly work away at their deficit, drawing to within four at 15-11 on a service ace from Sydney Omtvedt before a block from Zoe Lier and Meg Schmidt made it a two-point game at 17-15. That would be the closest SMSU got in the opening frame, though, as WSC closed the first set on an 8-3 run for a 25-18 victory and a 1-0 lead in the match.

The second set saw the Wildcats build another quick lead, this time a 6-3 advantage, but SMSU forced its way back into the frame with back-to-back kills by Zoe Lier to make it 12-9. WSC would continue to create separation over the next several possessions, however, going up by as many as nine at 22-13. The Mustangs kept things close with an 8-2 run to cut the deficit to just three, but the Wildcats were able to finish off the frame with a kill from Tarrin Beller to take a 2-0 lead after a 25-21 second-set win.

Culhane added they struggled controlling the ball during the first two sets and it translated into mistakes on both sides of the net.

“I thought we had a hard time controlling the ball; we had a sideout percentage in the 50s and they had them in the 60s, so that’s usually an indication that you’re not taking care of the ball very well,” Culhane said. “We made a lot of errors, we had 11 in the first game and they had five. They also won the defensive battle; they blocked better than we did and defended harder than we did. I just think that’s their history, so to speak; Scott (Kneifl) does a nice job of getting his teams to play hard defensive and I just thought they did it better than we did.”

SMSU was able to get out to a stronger start in Set 3, racing out to a 7-3 lead before Wayne State battled its way back to tie things up at 9-9. The tightly-contest play only continued to increase throughout the remainder of the frame, as neither side could create a lead larger than a couple of points. The Mustangs took an 18-17 lead on an Angela Young kill, but the Wildcats quickly tied it back up on the ensuing play.

With the score later tied at 20 apiece, both teams were in search of a late-set run. WSC quickly found it and ended the comeback attempt from SMSU with a 5-0 run to close the frame and take the match with a 25-20 third-set win.

Young and Jenna Walczak led the way for the Mustangs with seven kills apiece while Lier and Schmidt each added six. Payton Hjerleid led in digs with 12 while Rachel Fink added 10 and Emma Thomssen led in set assists with 15 while Alisa Bengen chipped in 10.

SMSU (14-10, 8-8 NSIC) has one final roadtrip in the regular season, with the Mustangs taking on Northern State University on Friday at 7 p.m. before heading to MSU Moorhead on Saturday for a 4 p.m. matchup.

Going into their final road series, Culhane said they’re going to need to regroup and start playing their game and know it’s going to be another challenging weekend.

“We need to regroup and we play one of the best teams in the conference in Northern at their place, so that won’t be an easy task at all and then we go to Moorhead,” Culhane said. “We’re just at the point where we’ve got to be able to play better and eliminate errors.”