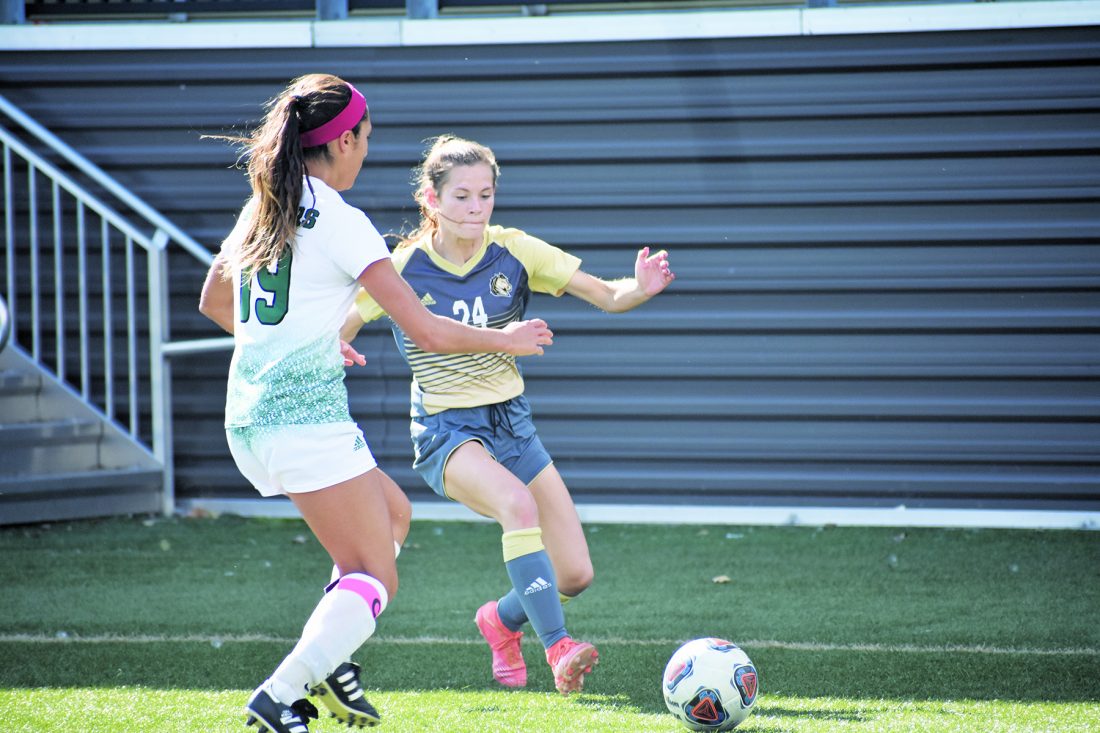 Independent file photo SMSU’s Alex Lotts controls the ball during their Oct. 6 game against Bemidji State University. The Mustangs will close the regular season on Friday against Sioux Falls.

•SMSU extended its winning streak to four games with another 2-0 weekend with a 1-0 shutout of Winona State last Friday, the first victory for the Mustangs over the Warriors in series history.

•SMSU then continued the momentum with a 4-0 victory over Upper Iowa on Sunday.

•Miskowiec was named NSIC Offensive Player of the Week, for the second consecutive week with two goals and two assists in the victory over UIU.

•With the victory, SMSU clinched a spot in the NSIC Tournament which will begin on Wednesday, Nov. 13.

•Alli Miskowiec leads the team in scoring with 10 goals, 27 points, 55 shots with32 of them on goal.

•Abbey Hoisington leads the team in assists with eight.

•Alli Miskowiec scored her first career hat-trick in the victory.

•Grace Heid leads the Cougars in scoring with three goals on the season. McKayla Philippi and Jaycie Dillenburg has two. Phillippi leads the team in shots with 18 shots and 13 shots on goal.

•Holli Knudsen and Alexis Wemhoff split time between the posts – both with two wins under their belt. Knudsen has a 2-2 record with one shutout and 29 saves while Wemhoff has a 2-6 record with 53 saves. Brayden Paul has also played significant minutes as goalkeeper with a 0-4 record and 42 saves.

•SMSU’s true freshman, Amanda Haimes, holds a 10-6 record this season with six shutout victories and playing all minutes this season. Haimes has 85 saves on the season with 23 goals allowed, with a season-high 11 saves in the 2-1 Victory over SCSU.

•Alex Lotts and Erin Fisher has recorded four, and Olivia Harriger has three.

•Jessica Jugovich and Katie Oatman each have one on the season.