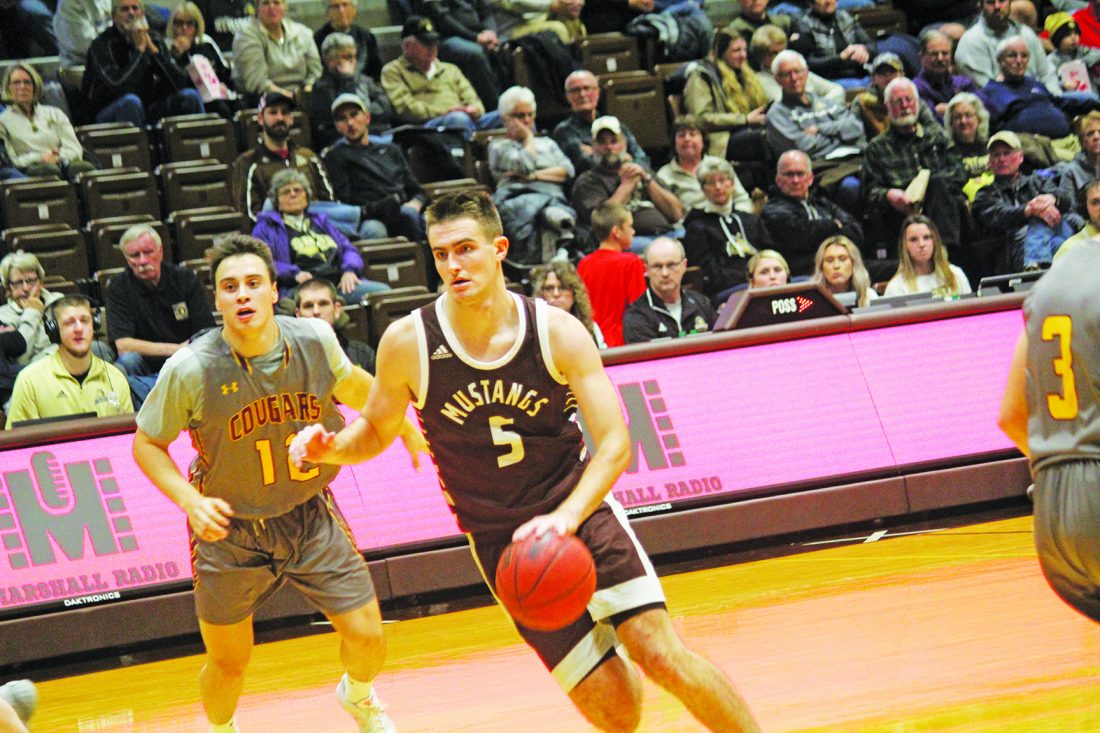 Independent file photo SMSU’s Grant Kramer drives past a University of Minnesota Morris defender during their game on Friday. The Mustangs will begin conference play this Saturday against the University of Sioux Falls.

•Saturday will begin SMSU’s 51st collegiate basketball season in the NSIC with the Mustangs holding a 371-397 all-time record in conference games.

•SMSU, which won the NSIC South Division title in both 2016-17 and 2017-18, finished fifth in the division last season, but won three games in the NSIC Tournament to advance to the championship game for a third straight season.

•Saturday’s game will be broadcast on 105.1 FM KARL with Ryan Rohlik providing play-by-play.

•Live stats, radio broadcast and video can be found at SMSUmustangs. com.

•Junior Kenny Byers leads the team in both scoring (13.8) and rebounding (8.3) and has recorded a team-high three double-doubles this season.

•SMSU has six players averaging 7.7 points or more per game.

•Sophomore Grant Kramer has dished out a team-high 19 assists.

•Junior Nick Dufault has connected on a team-high 10 3-pointers. He ranks fourth in team history in 3-point field goal pct. (42.6).

•Junior Weston Baker Magrath scored a season-high 18 points on 8 of 10 shooting in the win over Minnesota Morris on Nov. 22.

•SMSU shot as season-high 56 percent from the field, including 72 percent in the second half, in the win over UMM. The 82 points scored was also a season-high.

•SMSU has held a plus-15 rebound advantage in two games this season (+17 at Central Missouri and +19 versus Minnesota Morris).

•USF is 4-1 on the season and welcomes Minnesota Crookston to the Stewart Center on Tuesday for a non-conference game.

•Junior forward Teathloach Pal is averaging 13.8 ppg and 11.4 rpg, while shooting 60 percent from the field.

•Junior forward Austin Slater is scoring 13.4 ppg and has made 27 of 38 from the free throw line.

•Sophomore guard Chase Grinde has a team-high 16 assists and is scoring 9.4 ppg.

•Head coach Chris Johnson is in his 12th season at USF with a record of 199-144. He is the program’s all-time leader in victories.

•SMSU ranks 31st in turnovers per game and 58th in scoring defense.

•Kenny Byers ranks sixth in rebounding and seventh in steals.

The ecstasy of gold

Number of hunters in Michigan, nation are declining

Will we ever be free?