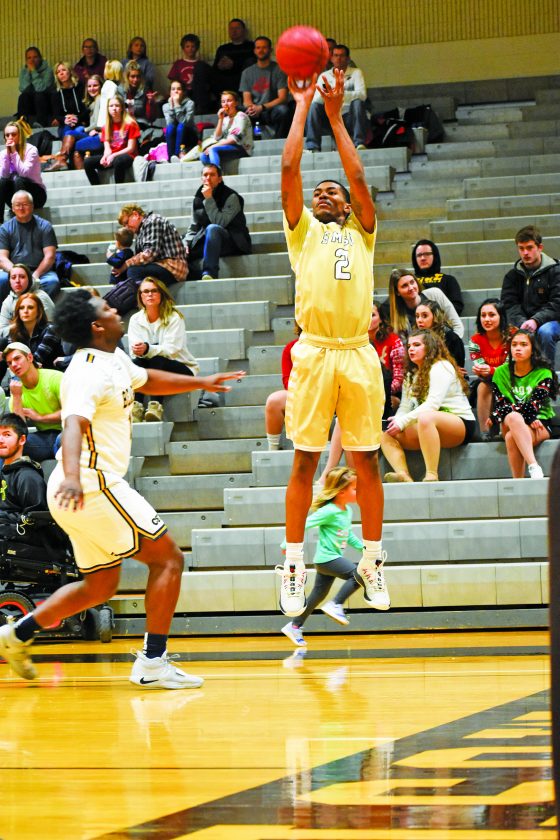 Independent file photo In this Dec. 8, 2018 file photo, SMSU’s Kenny Byers goes up for a shot during an NSIC game against Concordia-St. Paul. The Mustangs open their season on the road today against Central Missouri.

MARSHALL – The Southwest Minnesota State University men’s basketball team will have a newer look on the court this season, and it’s not just the uniforms.

With six newcomers and no seniors on this year’s roster, the Mustangs will rely on a mix of young talent and a strong junior class under 11th year head coach Brad Bigler.

Bigler said it’ll be a different approach to their season as from year’s past, but is looking forward to the challenge and is excited to get a new season underway.

“It feels great; a new challenge, new group of guys kind of fitting into new roles, it’s been a lot of fun this fall,” Bigler said. “I know that we have some hurdles to overcome with our youth, but it’s going to be a lot of fun just teaching the game a little bit differently and having this group evolve as much as they can.”

Last season, the Mustangs recorded another winning season, going 18-14 and reaching the NSIC Championship game before falling to Northern State University. This year, SMSU will have the difficult task of replacing three of its top four scorers and five seniors, with Ryan Bruggeman, Taylor Schafer, Michael Lee, Steven McNease and Kolin Bartlett all leaving the program.

“Right now the plan is to redshirt four of the five, with Cliff being the starting point guard,” Bigler said. “Right now it’s a matter of those guys hitting the weight room hard and coming in ready to work every day.”

Bigler added that they will need their upperclassmen to be able to step into bigger roles this season and help provide balance with their younger players.

“Cliff and Kaden (Evans) both bring playmakers at those guard positions, both of them have the ability to be great passers and get other guys involved. Then you have Kenny, who is going to be as dynamic as any guard in the league; the thing about Kenny that I’ve always appreciated is his ability to be a two-way guy, he can be an elite defender as well as an elite playmaker and we’ll ask a lot out of Kenny this year,” Bigler said. “Grant has to be that basketball IQ guy, he’s a guy that needs to be the guy who’s composed, can handle structure in the heat of the moment and then put everybody in the right spots in the heat of the moment and be that leader on the floor until Cliff and Kaden have some more time under their belt.”

Also joining the team via Nebraska-Kearney is former Marshall Tiger Weston Baker Magrath, who averaged 6.6 points per game and 3.1 rebounds while also leading the team in blocks with 33 last season.

Bigler said they know it could take a little bit of time for their team to get into a rhythm but thinks they’ll have opportunities to do some good things on both ends of the floor.

“I could imagine us having a little bit of a slow start, we’ve got a very tough schedule to start the season,” Bigler said. “Those first two tournaments are no joke, but I think this team on the defensive end really has a chance to evolve into a very good defensive team. We’ll also just have to find our niche as we go offensively and be creative and try to put guys in the right spots to be successful.”

The Mustangs will begin their regular season today at the Central Region Tipoff Classic in Warrensburg, Mo. beginning with an 8 p.m. matchup against Central Missouri before facing Arkansas-Monticello on Sunday at 4 p.m.

Bigler added he’s looking forward to seeing where they stack up as they begin the year.

“I think this first weekend really is an opportunity to get a gauge of where we’re at. Get a gauge on our level vs. D-II opponents who have had the same amount of preparation and see where we stack up,” Bigler said. “We’re going to go against two teams this weekend that have a lot of experience; Arkansas Monticello is probably a NCAA tournament team, Central Missouri is a team that has a lot of unknowns and they basically flipped their entire roster with having two guys that play that return otherwise everybody else is brand new, so there’s a lot to be figured out there and there’s going to be a lot of game time decisions where we’re going to have to be able to adapt to what they do.”