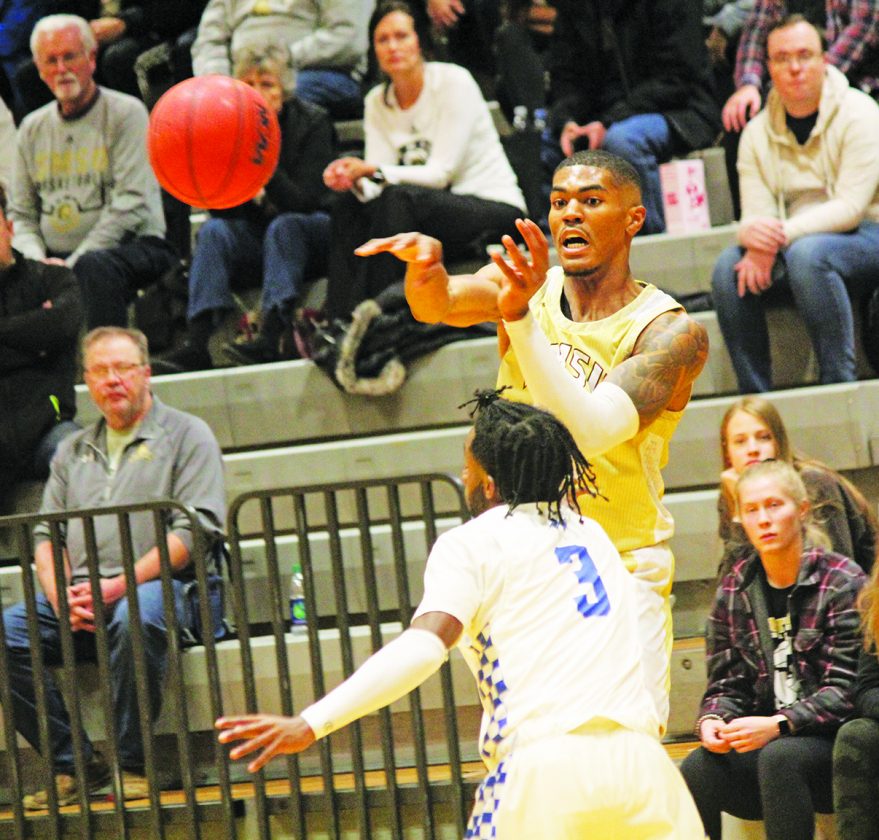 Photo by Jake Przytarski SMSU’s Kenny Byers passes the ball during their game against Mayville State on Thursday. The Mustangs defeated the Comets 73-61.

MARSHALL – A stifling defensive effort by the Southwest Minnesota State men’s basketball team provided the spark needed to overcome an offensive lull in the second half of Thursday’s home opener against Mayville State (ND) resulting in a 73-61 victory for the Mustangs.

SMSU coach Brad Bigler was pleased with the team’s defensive effort and anticipates it will be their strength all season long.

“Defense is probably going to be the identity of this team and I thought we had great energy, effort and focus on the defensive end at all layers,” said Bigler.

In spite of the offensive struggles to come later, the Mustangs opened up Thursday’s contest red-hot from the field and had the Comets on their heels early with a 21-7 lead via a 14-0 run. Freshman Cliff McCray paced the team in first half scoring with 12 points on 5 of 6 shooting from the field.

McCray’s impressive half offensively was aided by a sharp defensive performance that netted him two steals and led to multiple fast break baskets. Bigler said he has a chance to be special given his ability to guard ball handlers.

“He has a chance to be special on the defensive end. His ability to guard the basketball and to make plays on the ball is very unique for a true freshman and his growth over the course of the year is going to be a lot of fun,” said Bigler.

The Mustangs had nine different players record a basket in the first 20 minutes of play as they went on to take a commanding 47-28 lead into halftime following a buzzer-beating jump shot by Nick Dufault. Overall, the team finished the half shooting just under 67% from the field and 60% from beyond the arc.

Bigler credits the team’s unselfish play as one of the keys to their offensive surge in the first half.

“I thought we played unselfish (by) moving the basketball and trying to make each other better,” said Bigler. “I thought we were able to really get out in transition off our defense too and turn some of our defense into offense.”

Out of the half, the shots stopped falling and the Comets took full advantage by outscoring the Mustangs 15-6 through the first 10 minutes of play to cut the deficit to 13 points at 56-43. In need of a spark, the team found it from Kaden Evans, who broke the cold-streak with 10 straight points to help push the lead back to 20 at 65-45.

Bigler is excited to have Evans back due to his ability to impact games in multiple ways.

“Just in general having Kaden back was important.” said Bigler. “It allowed us to play very efficient minutes with all nine guys and it allows us to put another playmaker or shooter on the floor. He’s also a guy, as we get going a little bit further in the season, who can really make his teammates better with how he passes.”

With a comfortable lead in hand, the Mustangs ensured a comeback by the Comets was not in the cards by eliminating chances to score in the paint. Weston Baker Magrath led the way in that pursuit by finishing the contest with a game-high four blocks.

Bigler credited Baker Magrath for stepping up and making plays throughout the game.

“We funnel a lot of things to him and we ask him to commit on making plays on those balls and tonight he did a great job of getting his hands high early and making a lot of plays,” said Bigler.

With the victory, the Mustangs improve to 2-3 on the season and will take on Minnesota Morris today at 7 p.m. at the R/A Facility. Bigler hopes to see the same level of energy in today’s game that he saw in Thursday’s win over the Comets.

“I think right now defense is the focus, and continuing to bring that effort and energy,” said Bigler. “Our offense is going to continue to evolve as we go throughout the season.”