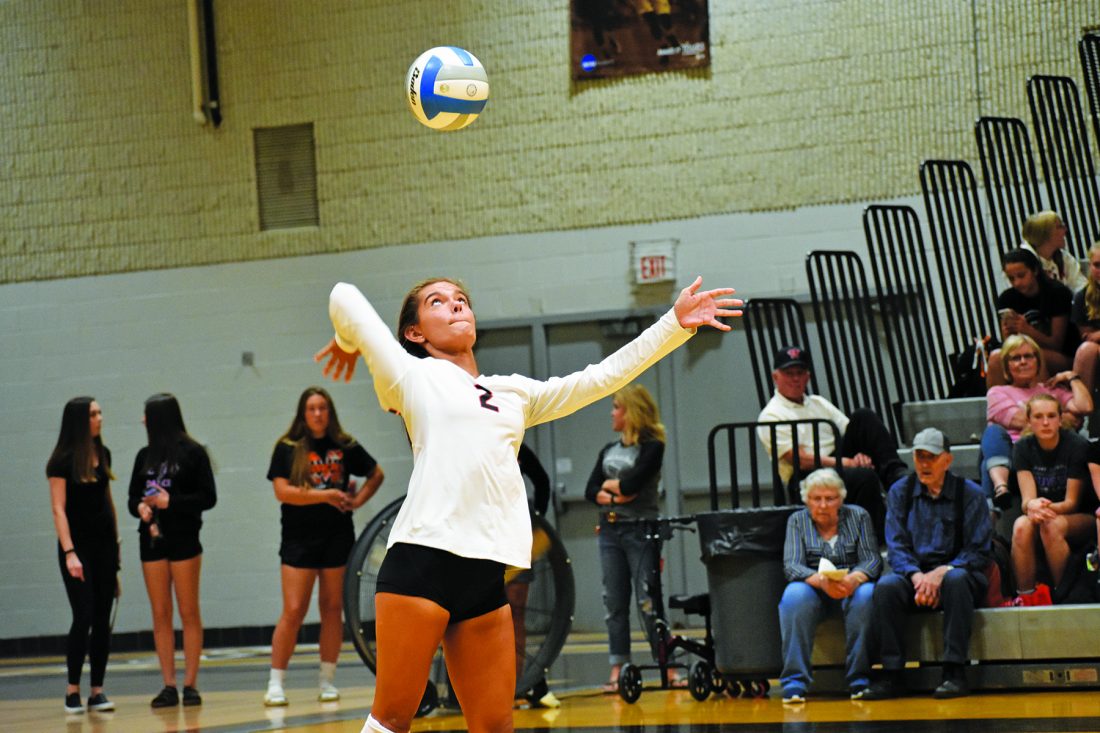 Independent file photo Marshall’s Kate Bucher serves the ball during their match against Bethlehem Academy on Aug. 29. Bucher recently achieved a rare feat by competing in both her team’s state cross country meet and section volleyball championship in the same day.

MARSHALL — On Oct. 11, 1992, legendary two-sport athlete Deion Sanders competed in an NFL game for the Atlanta Falcons before turning around and boarding a private jet (and later a helicopter) to join his other team, the Atlanta Braves of the MLB, for their NLCS game against the Pittsburgh Pirates.

At the professional level of competition, the feat has yet to be duplicated. At the high school level, however, a local multi-sport athlete gave “Neon Deion” a run for his money this past weekend.

That’s because Marshall girls cross country runner and defensive specialist for the volleyball team, senior Kate Bucher, did the improbable on Saturday by competing in the Class AA cross country meet in the morning before returning to Marshall later in the afternoon for the Tigers Section 3AA championship match against Minnewaska Area.

The marathon day of competition began on the campus of St. Olaf in Northfield at 10 a.m. where she made her second-straight appearance at the state meet after finishing 75th in 2018 with a time of 19:55. This time around, she improved her place and time by finishing 58th with a time of 19:12:70 in the 5000 meter race (approximately three miles) to pace the Tigers who finished in 10th place overall.

For many, the thought of getting up early to prepare and compete in a three-mile race would be the extent of a long day of exhausting competition. That’s far from the case for Bucher, though.

Without the aid of a helicopter ride and a cozy private jet like Sanders had to get to the next venue, Bucher immediately hit the road upon completing her race and made the 148-mile trek back to Marshall, a trip that takes approximately 2 hours and 45 minutes. The Tiger volleyball section tilt was slated for a 6 p.m. start at the R/A Facility at SMSU.

Unlike Sanders who never took the field in the NLCS game, Bucher returned with time to spare and was a valuable presence on the court for the Tigers as they took care of business against the Lakers to punch their ticket to the state tournament for a third straight year. She finished the match 6 of 7 from the service line and added a dig in the straight set sweep.

Remarkably, this was not the first time Bucher has accomplished the feat.

Last season, the state cross country meet and volleyball section finals were both held on the same day of Nov. 3, 2018. Interestingly enough, there were two different Tigers who suited up for both events as Bucher was joined by 2019 graduate Kaia Sueker on the track and court that day.

Thankfully, with the cross country season now in the rearview mirror, Bucher and the Tigers will not have to worry about scheduling conflicts arising as they prepare for the first round of the Class AA volleyball state tournament beginning on Thursday. No. 2 seed Marshall will open up play with a quarterfinals matchup against Belle Plaine at 7 p.m. at the Xcel Energy Center.