CLASS AA VOLLEYBALL: No. 2 Marshall extends its season and advances to the consolation championship

No. 2 Marshall extends its season and advances to the consolation championship 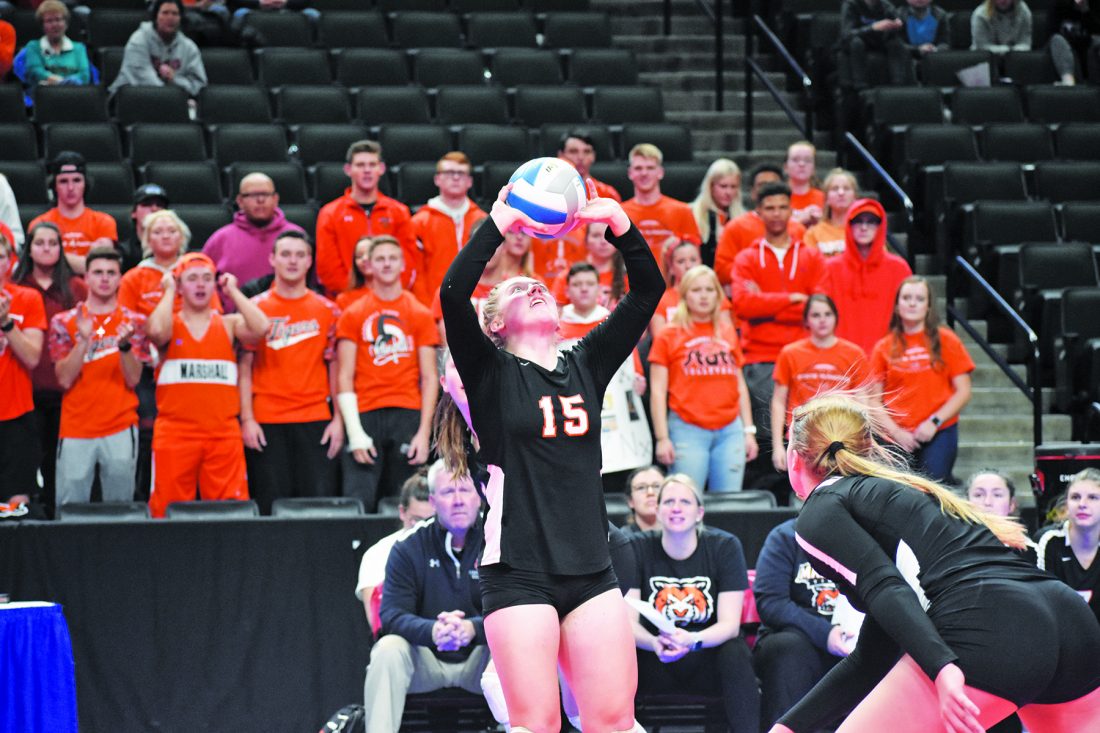 ST. PAUL — After a tough start to their state tournament, the Marshall volleyball team knew it needed to put together a bounce-back performance if it was going to extend its season another day. The No. 2 seeded Tigers were able to do just that, overcoming a first-set loss to defeat Pequot Lakes 3-1 (21-25, 25-17, 28-26, 25-15) in the Class AA consolation semifinals on Friday night at Xcel Energy Center.

Marshall coach Dan Westby said he was proud of the way his team continued to battle and felt they were able to enjoy things and become more loose as the match went on.

“The way our kids pulled through I think says a lot about them,” Westby said. “We were certainly concerned coming in about how our kids were going to handle things [today]; at times, especially in Set 1, it looked like we had the weight of the world on our shoulders and we just tried to reinforce to our kids that we need to enjoy this experience and tried to hammer that home over and over again. I think the longer the match went, the more our kids just enjoyed the competition.”

Senior Rachel Schwarz added that after having a chance to reflect on Thursday’s match against Belle Plaine, they were able to come into Friday a little more prepared and was pleased with how they came together as a team.

“We kind of let last night [Thursday] sit in and then we started today [Friday] with a new attitude. We go practice each day before state, so we worked on things and felt more prepared going into this game,” Schwarz said. “And I feel like everyone did a great job of just sticking together, we weren’t just on our own islands, we were coming together and getting so excited and that’s so much more fun to play in.”

The Tigers were able to take an early lead in the opening set, going up 6-4, but Pequot Lakes battled back and tied things up at 10-10 before taking a lead of its own at 13-11. Despite trailing over the next few possessions, Marshall was able to stay within striking distance at only a couple of points before the Patriots pushed their lead to 20-16. The Tigers rallied back to draw to within two at 22-20, but Pequot Lakes took Set 1, 25-21.

After gaining early momentum in the opening frame, the Patriots found a solid start to Set 2, jumping out to a 5-2 advantage. Marshall was able to cut the deficit to one at 11-10 before an ace from Jordyn Hilgemann tied things at 12-12. In need of a spark, the Tigers found it in the ensuing stretch, going on an 8-2 run to go up 20-14 before ultimately claiming Set 2, 25-17 and tying the match at one set apiece.

The Patriots began Set 3 with a similar start as its previous counterpart, gaining a 9-3 lead before Marshall rallied to make it a one-point game at 14-13. Pequot Lakes maintained its advantage throughout the next few possessions, going up by as many as four at 21-17 to force a Tigers timeout.

Marshall hung tough, however, slowly working away at the deficit before a Tessa Gannott kill and a block from Logan Sherman helped tie things up at 22 apiece. Pequot Lakes was able to get to set point three separate times, but the Tigers continued to find an answer before taking the final two points to earn a 28-26 Set 3 win and take a 2-1 lead in the match.

Westby said there were times of trying to do too much that cost them in the quarterfinal and felt it came up at various points in the third set, but credited his team for fighting back and gaining the momentum at a pivotal part of the match.

“We just felt like our kids at times, and I felt like this happened on Thursday, we just tried to do too much and we tried to remind them to do what they do and everything will take care of itself. The same was true in Set 3 and I think being able to pull out that win was huge,” Westby said. “Our kids did a nice job of just scratching and clawing and winning those last few points in Set 3.”

Using their recent momentum to their advantage, the Tigers raced out to an early 5-1 lead before extending it to double digits at 13-3. Marshall then continued to maintain at least an eight-point lead on its way to a 25-15 Set 4 win to advance to the consolation championship.

Marshall (29-7) will face No. 4 Watertown-Mayer today at 11 a.m. Westby knows it’s going to be another challenging matchup and hopes they can have a chance to cap off their season on a high note.

“We play a very good Watertown-Mayer team and that’s going to be tough,” Westby said. “Hopefully our kids are going to be excited to play and hopefully we can walk out of here with a win.”