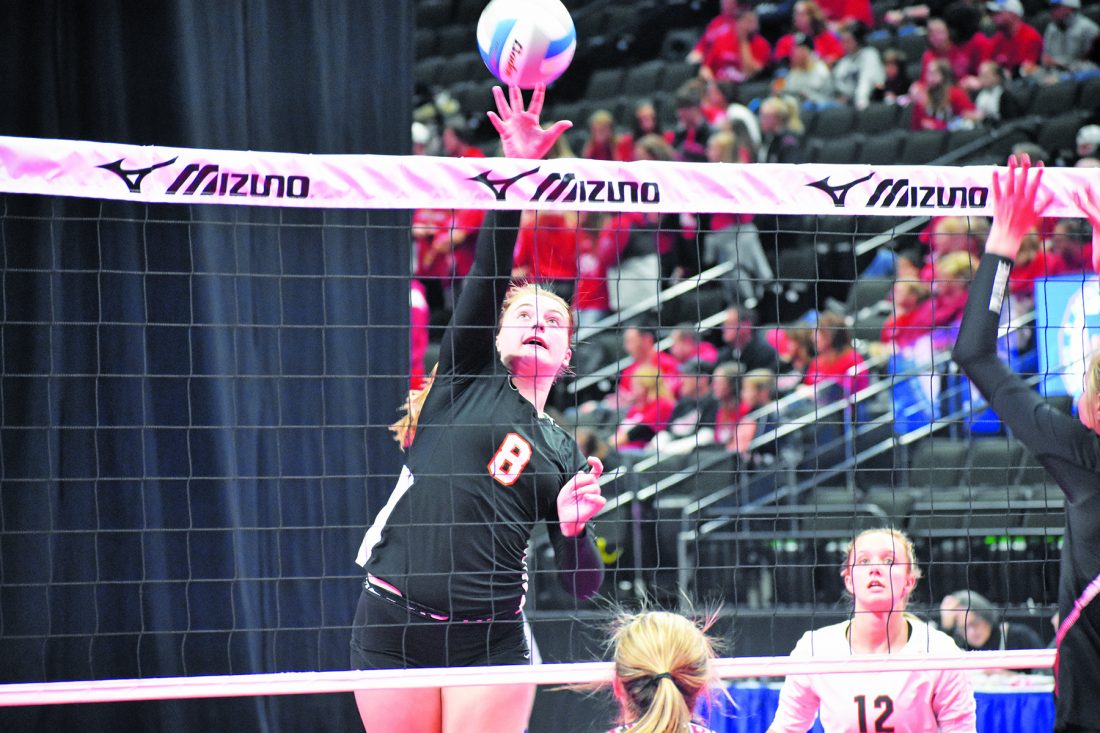 Photo by Sam Thiel Marshall's Emily Meier tips the ball over the net during their Class AA quarterfinal match against Belle Plaine on Thursday at Xcel Energy Center.

ST. PAUL — The No. 2 seed Marshall volleyball team was forced to dig deep on multiple occasions in its Class AA quarterfinal matchup against unseeded Belle Plaine. A quick 2-0 deficit put Marshall behind early and a late rally to extend the match to five sets came up just short, as Belle Plaine defeated Marshall 3-1 (15-25, 20-25, 25-21, 22-25) on Thursday night at Xcel Energy Center.

Marshall coach Dan Westby credited Belle Plaine for coming out with a lot of focus and felt they put pressure on his team right from the start.

Marshall was given some tough news before the game, as senior middle hitter Paige Andries was going to be out after suffering a broken hand injury earlier in the week.

“On Monday in practice, she broke her hand. We felt like we had it under control to the point where she could play and then we found out she couldn’t and we had practiced with the intent that she would be there,” Westby said. “When we found out just before game time that she couldn’t play, it was a tough adjustment for our kids. I think they handled it well, as well as you could; I think if you do that at any level, take out a key player like that at that point, I think it’s tough, but again, all things considered I think our kids handled themselves pretty well.”

Tessa Gannott would earn the start, recording five kills and three digs. Westby added that he felt Gannott was able to do a good job of adjusting to the new role as the match went on but said they just didn’t prepare enough with that particular lineup.

“We put Tessa in that spot and Tessa hasn’t played that position before but I thought she handled herself pretty well; she might have shown some nerves early but I thought she bounced back,” Westby said. “And Paige is a great player; again, I think this is where I maybe dropped the ball as a coach, we came into this match hoping she would be able to play and I guess I should have covered my bases better and had option B ready and probably just didn’t do a very good job of that. We were trying to make some adjustments on the fly, I thought our kids handled it well. At the end there, it just got to be too much to deal with for our kids. We’ve had a great season and it felt like we’ve gone toe-to-toe with the best teams in the state in all classes and to throw a bunch of changes at our team was tough, but that’s the way it goes and we’ll bounce back [today] and be ready to go.”

Marshall found its backs against the wall in the early portions of Set 1, as Belle Plaine raced out to a 6-2 lead before a service ace from Logan Sherman cut the deficit to 10-7. Marshall would continue to struggle with errors throughout the remainder of the frame, though, and Belle Plaine capitalized on the opportunity, building a 17-9 lead en route to a 25-15 victory in the opening set.

The second set was back and forth to start, as the two teams were deadlocked at 6-6 before Belle Plaine took a 13-11 lead. Marshall stayed within striking distance for the majority of the frame, however, before a Sherman and Emily Meier block and a Jordyn Hilgemann kill tied things back up at 20 apiece. Both sides looked for one final push to claim the set and Belle Plaine did just that by rattling off five straight points to take Set 2 25-20 and a 2-0 lead in the match.

In need of a spark, Marshall got a strong start to Set 3 by taking an 8-4 lead before extending its advantage to 12-6. Marshall continued to keep Belle Plaine at bay over the next several possessions, as a kill from Keziah Knudson made it 15-10, but BP had an answer by going on a 5-2 spurt to cut the deficit to just two at 17-15. Marshall was able to weather the storm, though, countering with a 4-0 run to take a 21-15 lead before earning a 25-21 third-set win and forcing a fourth set.

Marshall’s momentum carried over to begin Set 4, this time with a strong serving attack – including two aces each by Rachel Schwarz and Hilgemann – guiding MHS to a 9-1 lead. Belle Plaine fought right back, though, going on a 10-2 run to tie things at 11-11 before taking a 14-13 lead. More points were then traded over the next few possessions, as a Meier kill helped tie things up at 17 apiece before a pair of aces from Belle Plaine pushed them back in front at 20-17. Marshall was able to draw to within two later in the frame, but Belle Plaine earned the final point to close out the set 25-22 and move on to the semifinals.

Hilgemann led in digs with 25 while Mia Schnaible added 16, Schwarz had 15 and Sherman added 10.

Schnaible said on the defensive end, they were just trying to keep the ball in play and deliver strong passes to their setters.

“I would say we were just trying to get a touch on every single ball and on serve-receive try and get a ball to our setters so we can deliver a good ball to our hitters and make good things happen.”

Marshall (28-7) will now face Pequot Lakes in the consolation semifinals today at 7 p.m. Westby said their biggest takeaway is to get out to a better start and find a rhythm with the changes they’ve made.

“Hopefully the fact that we’ve had to make changes we’ll be more comfortable with that,” Westby said. “We’ll settle in a little bit better [today] and hopefully be able to come out stronger than we did.”