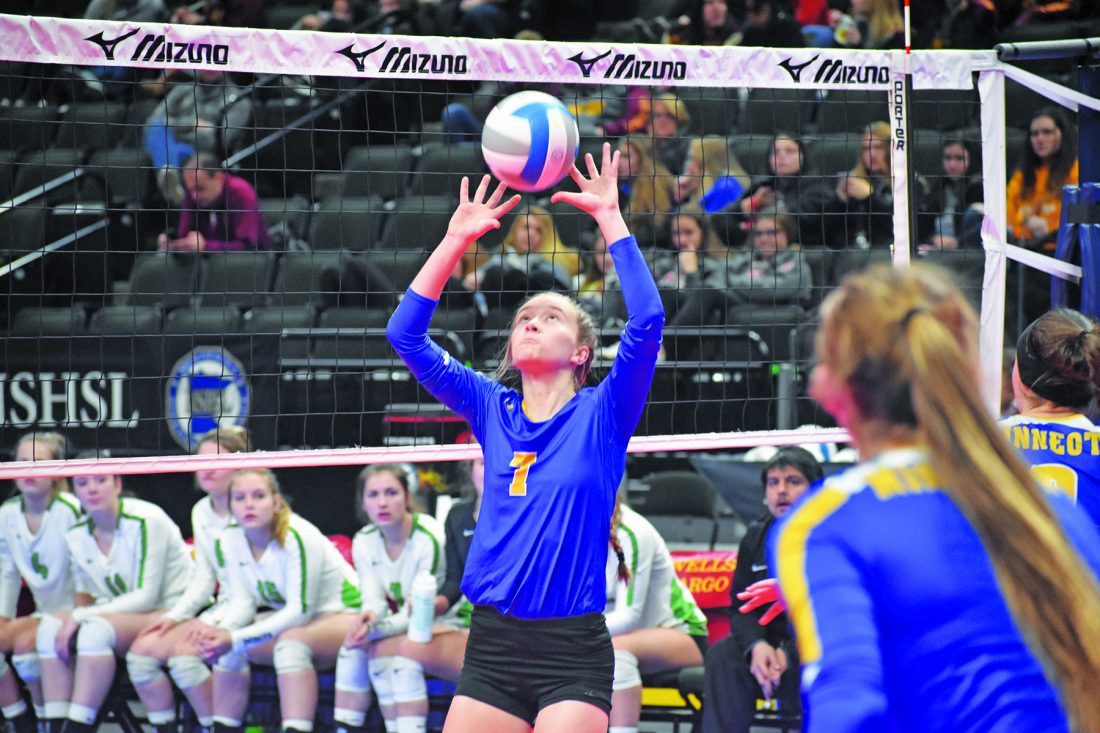 Photo by Sam Thiel Minneota's McKenna Yost sets the ball during their Class A quarterfinal match against Greenway on Thursday at Xcel Energy Center.

ST. PAUL — For a lot of players and teams, the bright lights shining down on the courts at the state tournament can make things certainly more intimidating. But for the young Minneota volleyball team, being in that situation has helped them thrive and, more importantly, see success on the biggest stage of high school volleyball.

With roughly half of their roster listed as a sophomore or below, the Vikings have had to rely on its young core to be able to gel with the returning starters. Players such as McKenzie Tolk, Abby Frie and McKenna Yost have risen to the occasion throughout the season and have worked their way into key roles on the floor. In Thursday’s Class A quarterfinal win against Greenway, Tolk collected a pair of digs as the team’s starting defensive specialist. Frie had five kills, and Yost led the team in set assists at 32 and added seven digs.

The cohesiveness between the Vikings’ young talent and veterans has helped Minneota earn another top seed in the tournament as a result and build a record of 30-3 entering tournament play. Another key factor for Minneota has been the guidance of its experienced players in big situations. When the Vikings found themselves in a close battle with the Raiders in the opening set, one of those veteran leaders, Natalee Rolbiecki, said they helped the younger players calm the nerves and resharpen their focus as a group going into the rest of the match.

“Like coach Hayley [Fruin] said, the nerves kind of got to us in the first set and there are a lot of new people that didn’t play a lot last year, so the veterans had to help them settle in and get them riled up so that we could go and start playing better,” Rolbiecki said.

Fruin added that the younger players have benefited tremendously from the leadership shown by her upperclassmen as well as the experience her players have gained between the past couple of season’s state tournament teams and so far this year and it has shown in their ability to step up to the challenge.

“I couldn’t agree more; I think the benefit with last year is that most of those kids sat on the bench with them and they got to play a little bit during playoff time and a lot during the season. Obviously none of them have actually played up here but at least they got to experience it with the team and kind of get a feel of the environment,” Fruin said. “Give a lot of credit to our veteran players, like they said, Abby [Hennen], Natalee, Morgan Hennen and Ellie Pesch do a great job of just taking those young ones under their wing and getting them comfortable and confident and just keeping them level-headed.”