CLASS A VOLLEYBALL: Vikings back in title game for a third straight year

Vikings back in title game for a third straight year 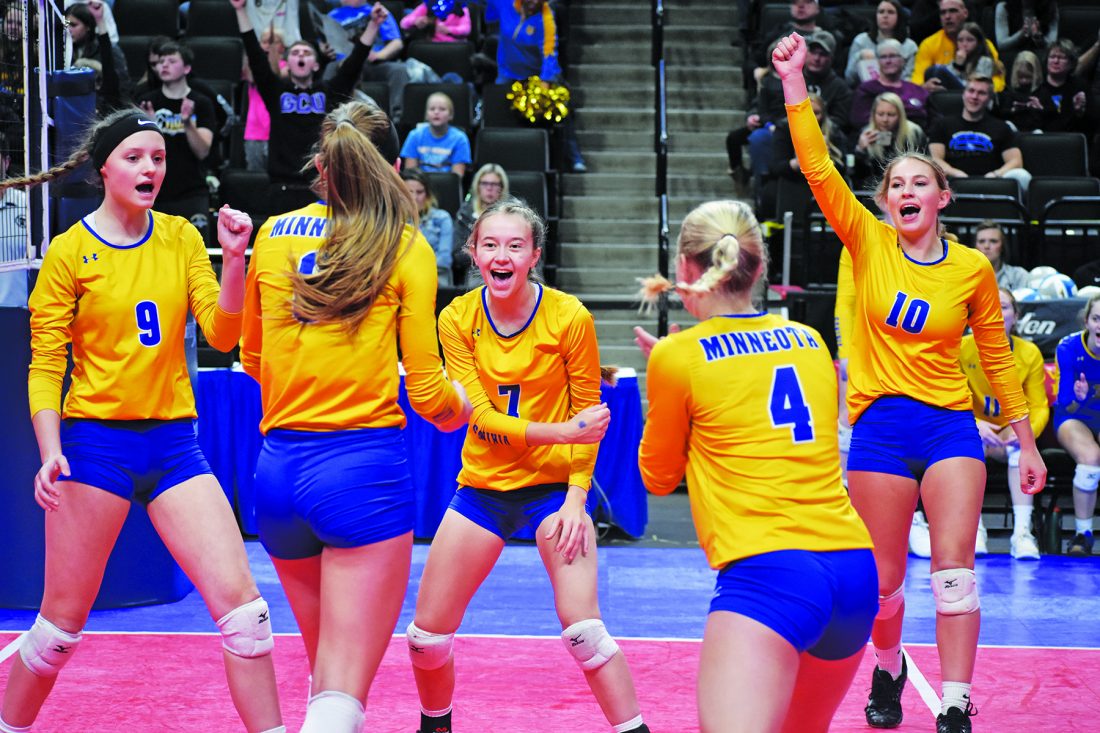 Photo by Sam Thiel Members of the Minneota volleyball team celebrate after scoring a point during their Class A semifinal match against Fosston on Friday at Xcel Energy Center.

ST. PAUL — The Minneota and Fosston volleyball teams have had some classic battles at the state tournament. The Vikings and Greyhounds met in the 2001 Class A title match, which Fosston won 3-1. The next year, the Greyhounds took a quarterfinal match against Minneota, also in four sets.

On Friday afternoon, the two teams crossed paths once again, this time with a trip to the championship match on the line. The No. 5 seed Fosston created early momentum with a Set 1 win, but the No. 1 seeded Vikings showed their resiliency and experience the rest of the way for a 3-1 (23-25, 25-14, 25-7, 25-10) victory at Xcel Energy Center and advanced to title match for the third consecutive season.

Minneota coach Hayley Fruin credited Fosston for coming out ready to go and said they made too many errors in the first set, but felt her team was able to do a good job of gathering themselves and getting back to their game.

“Definitely give a lot of credit to Fosston, they came fired up and ready to go and we just couldn’t put the ball away, they were digging everything and are scrappy at keeping balls alive. I think in that first set we had a few too many errors and our serve-receive just wasn’t our strong suit,” Fruin said. “We talk about it all the time, we’re a totally different team if we can serve-receive pass with always having three hitters available, but our setters ran a few miles that first set and then come Set 2, I think we kind of collected ourselves and just passed the ball.”

After earning a thrilling five-set victory over Mounds Park Academy the night before, the Greyhounds was extremely energized to go toe-to-toe with the top-seeded Vikings. Minneota would claim an early 7-6 advantage in the opening set, but Fosston battled back to take the lead at 11-9. The Vikings worked their way back for a 16-14 lead before more points would be traded and Fosston jumped in front at 19-18. The Greyhounds then earned a kill to go up 23-22 and ultimately took the first frame 25-23 and an early lead in the match.

Looking to change course, the Vikings opened Set 2 with a 5-3 lead before a strong serving run by McKenna Yost helped push Minneota’s advantage to 12-4. The Vikings then built their first double-digit lead of the afternoon, only to see a 5-1 Fosston run cut the deficit to 16-10. Minneota wouldn’t let the Greyhounds draw any closer, however, closing the frame on a 9-4 run to take Set 2, 25-14 and tie things at one set apiece.

With the momentum slowly starting shift back into its favor, Minneota took command of the third set early and never looked back. A 5-0 start by the Vikings quickly ballooned into a 19-6 lead thanks to a trio of kills from Natalee Rolbiecki and a key string of serving that pushed Fosston onto its heels. Minneota made sure to keep the Greyhounds offense in single digits the rest of the way, claiming Set 3 25-7 and pushing its lead to 2-1.

Set 4 was not much different as its previous counterpart, with the Vikings rolling to a 9-3 lead on an ace from Ellie Pesch. Minneota later worked its way back to a double-digit advantage and kept its foot on the gas pedal, as a Rolbiecki kill finished the match and the Vikings stamped their ticket into the championship game with a 25-10 fourth-set win.

Rolbiecki led the way for the Vikings with 17 kills while Abby Hennen and Morgan Hennen each added 13 and Abby Frie had 12. Yost led in set assists with 36 while Ireland Stassen added 14.

Yost said it’s a nice feeling to be able to rely on multiple hitters and added their balance on offense has played a huge role for their team.

“It’s pretty good, we don’t usually have a go-to hitter and we use at least two or three hitters and it really works well for us because when we do that, we’re really unstoppable and you could see it the second, third and fourth set,” Yost said.

Defensively, Abby Hennen led in digs with 19 while Morgan Hennen added 17 and McKenzie Tolk had 10.

Minneota (32-3) will face No. 2 Waterville-Elysian-Morristown today at 1 p.m. in the title match. W-E-M defeated No. 3 Medford 3-0 in the other semifinal match. The Buccaneers are in their second state tournament as a program, with the first coming in 2015 where W-E-M won it all that year.

Playing in their third straight championship, Fruin said they can’t take anything for granted and they’ll need to be ready from the start.

“Definitely need to come out fired up and ready to go and we can’t just expect to win. It’s going to take all 12 of us [today] and we know it’s going to be a tough battle,” Fruin said. “The fun part about this team is we don’t have a weak rotation, all six of our rotations are just as strong as the next one. It makes it fun to coach.”