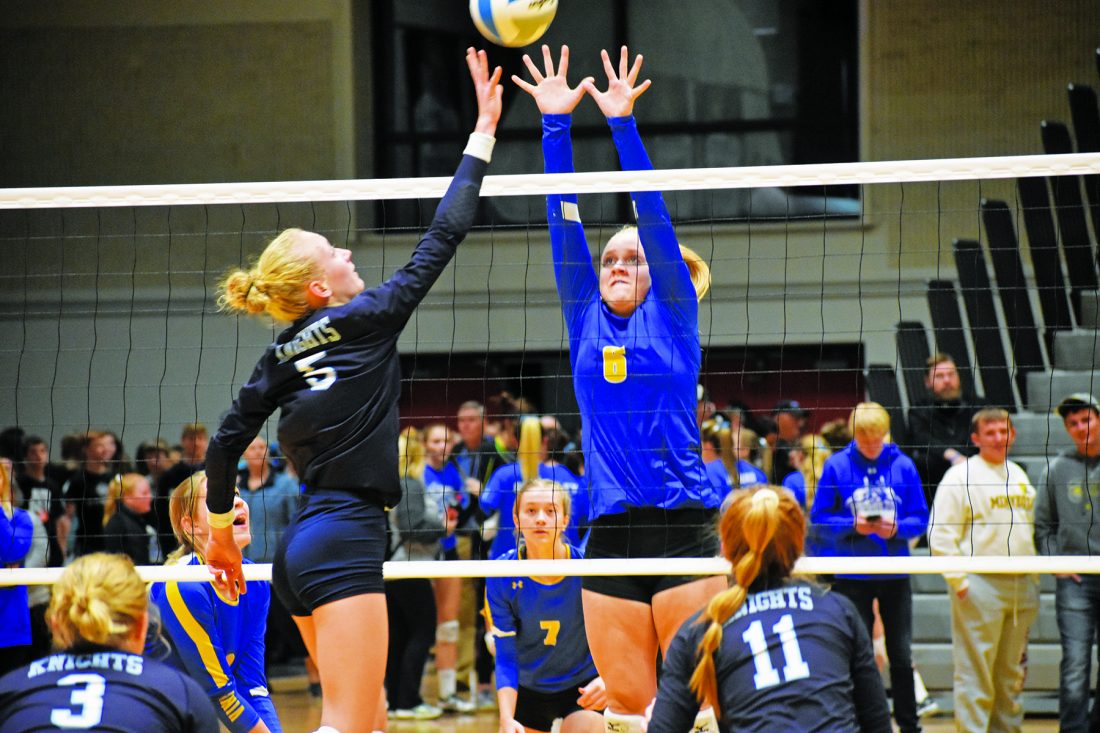 Independent file photo Minneota’s Abby Rost goes up to try and block a kill attempt by RTR’s Abby Carr during their Section 3A tournament match on Oct. 29. The Vikings will begin their state tournament play today against Greenway.

MINNEOTA — Last season, the Minneota volleyball team completed its goal of taking home a championship when the Vikings defeated Medford in the final match for its second overall title. This year, Minneota is back in the Class A tournament and is ready to keep its momentum rolling.

The Vikings enter with an overall record of 30-3 and is coming off a sweep over Adrian in the Section 3A Championship on Saturday. Minneota coach Hayley Fruin said their biggest takeaway from the section tournament was their ability to serve tough and get into a rhythm with their entire rotation.

“I think this postseason we’ve really been serving tough and passing well, which makes us a totally different team when we’re in system,” Fruin said. “We’ve got five hitters that all can put the ball away and that’s tough to defend, so hopefully here at the state tournament we can do the same thing and keep that going and build off that momentum. Day in and day out, we’re just trying to get better here until we play [Thursday].”

Abby Hennen added it’s a great feeling to be able to get back to state and is proud of the work they’ve put in this season to make another trip to the tournament.

“It’s awesome to be back,” she said. “I think a lot of people kind of under-estimated us in the beginning of the season since we lost some really crucial players but I think we did a lot of really good things in the summer with open gyms and lifting weights, etc. We created a history in the summer and then it’s been paying off in the fall.”

Minneota is making its 13th overall appearance in the tournament and will be the No. 1 seed. Meanwhile, their opponent Greenway is making its fifth overall trip and first since 2001 and will enter as a random draw. Three of the eight teams in the Class A field are repeat qualifiers from a season ago [Minneota, Medford and Belgrade-Brooten-Elrosa].

“It sounds like they [Greenway] do have one hitter that just had 27 kills the other night, so she’s kind of going to be their go-to player. She’s tall at 5-foot-10 and we’ll see her on the outside and in the middle and we just need to try and slow her down,” Fruin said. “We’re probably not going to be able to get a lot of blocks on her but at least if we can slow down a lot of the balls she hits, get some touches and then just go when she’s in the back row and again, just keep up our level of play and pass well and try to wear her down after a while.”

The Vikings will have a strong balance of veteran experience and youth, led by senior Morgan Hennen as well as juniors Abby Hennen, Ellie Pesch and Abby Rost and sophomores McKenna Yost, Natalee Rolbiecki and Abby Frie.

Fruin said their main focus during practice this week has been working on the little things they haven’t gotten to do as much since early on in the season and cleaning up any mistakes.

“On Monday, we did a lot more individual things; our setters took a lot of reps with our hitters and just broke up into groups and did more passing and defense on the other side so it was kind of nice to almost go back to the beginning of the year where you go back to the basics and really focus on each player and try to get each of them better at what they’re struggling with,” Fruin said. “On Tuesday, we did a little more live play just because we haven’t played since Saturday.”

Today’s quarterfinal matchup begins at 1 p.m. Going into the tournament, Fruin knows it’s going to be another challenging set of games but they’re just going to give it their all and leave everything out on the court.

“We know it’s going to be really tough this year, especially with our young squad but our goal is to not beat ourselves. If we’re going to lose at the end of the day, then we know that we gave it our all and we left everything out on the court,” Fruin said. “We’re going to be facing some tough teams up there and tougher teams than we maybe even faced last year. It’s going to be fun.”