AREA HOCKEY: Taking the next step 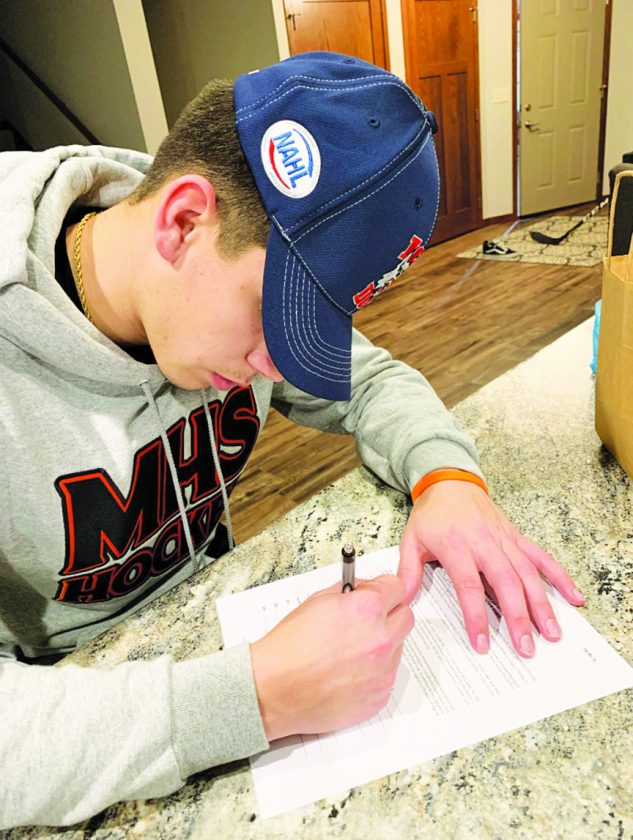 Photo courtesy of Kaleb Welvaert Kaleb Welvaert signs his tender with the Fairbanks Ice Dogs on Sunday. Welvaert won’t be the only Marshall player on the team, as he joins Mason Plante who graduated last year.

MARSHALL – Marshall boys hockey standout Kaleb Welvaert was a fixture on rinks from the Twin Cities area all the way up to Duluth this fall where he competed against some of the state’s most talented players in the ultra-competitive Upper Midwest Elite League.

On Sunday, the Tiger senior saw his hard work and dedication to the sport of hockey pay off with the signing of a North American Hockey League tender with the Fairbanks Ice Dogs, where he will continue his hockey playing career after graduation.

Welvaert is thrilled to be taking the next step towards reaching his ultimate goal of playing college hockey.

The Ice Dogs, located in Fairbanks, Alaska, are one of 27 teams in the NAHL competing in a 60-game season. Teams are comprised of highly-skilled players ranging from 16 to 20 years old seeking an opportunity to play collegiately.

In signing with the Fairbanks franchise, Welvaert will reunite with his cousin and former Marshall teammate Mason Plante for the 2020-2021 season. Off the ice, the two are close friends and have been in constant contact throughout Plante’s first season in Fairbanks.

According to Welvaert, knowing what to expect through conversations with Plante made the decision to sign with the Ice Dogs an easy one.

“His decision going there definitely influenced mine with just knowing a lot about the area,” said Welvaert. “Now I know a lot about their program, just the way they handle things, the way the coaches are to the kids and I just love the atmosphere that he tells me about.”

Knowing the stress that can come with making a decision of this magnitude through Plante’s experience last season, Welvaert was especially pleased to have it settled prior to the start of his senior campaign with the Tigers.

“Coming out of the Elite League I wanted to have a decision made,” said Welvaert. “I wanted options to come up before the season (because) I know how Mason went through it (and) he stressed about it a lot and I just thought that was good to get that out of the way. Now I can just focus on this and then focus on that after.”

Welvaert’s path to the Ice Dogs began during the 2018-2019 season when the Tigers traveled to Blaine and won the Schwan’s Cup Open. During the three-game tournament, Welvaert racked up six points with five assists and one goal in wins over Princeton, Simley and Southwest Christian/Richfield.

“He just said that he really liked my game and he’d continue to talk to me and then I got an invite to their camp and went all the way through to the final all-star game,” said Welvaert. “He said that they’d definitely be staying in contact with me and that’s kind of where it’s gone from there.”

Coach Stewart and Welvaert remained in contact following the completion of the high school season and into the summer and fall where the mobile defenseman remained on the ice for the Elite League. Against some of the state’s premier talent, Welvaert did more than just hold his own as he was later selected to play in the All-Star game.

Shortly after, Welvaert received the call he’d been waiting for.

With Sunday’s signing now in the rearview mirror, Welvaert has shifted his focus back to the upcoming varsity hockey season where he will look to help guide the program back to the state tournament for the first time since the 2012-2013 season.

The three-year starter for the Tigers is excited to see his hard work put in playing in the Elite League pay off when the high school season starts.

“I think my endurance is the biggest thing playing against that level because coming back down here where hockey’s a little bit slower I’ll be able to build up my patience and work on just making the right play,” said Welvaert.