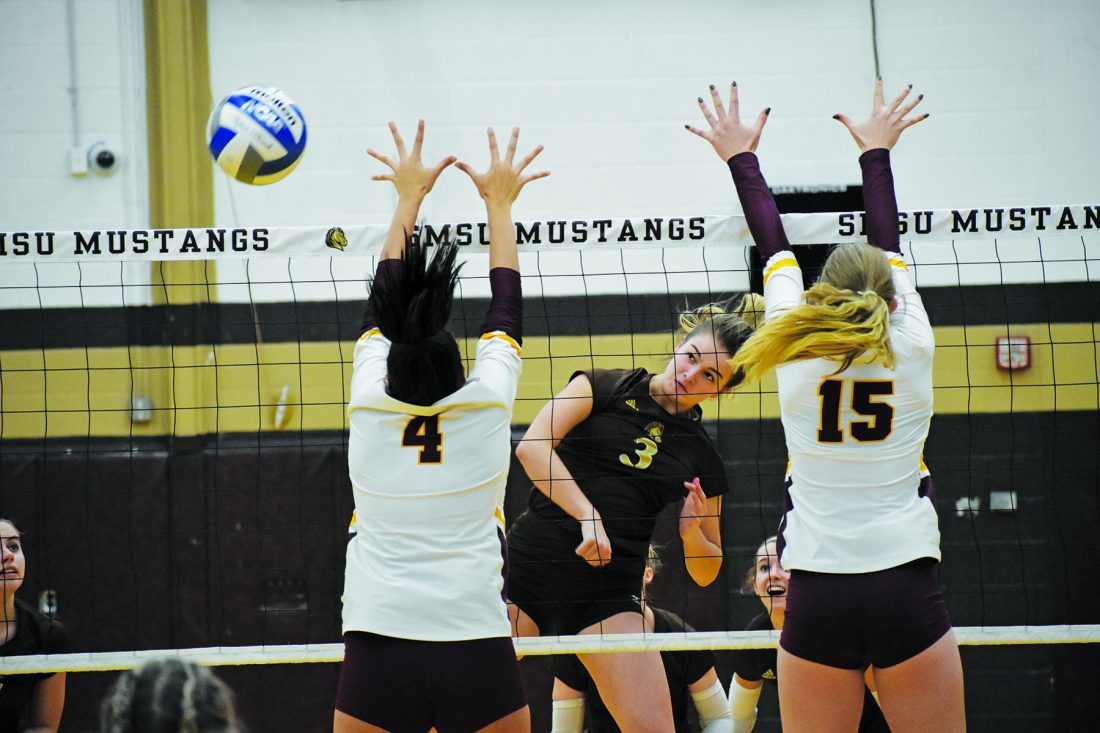 Photo by Sam Thiel SMSU’s Jenna Walczak follows through on a kill during their match against the University of Minnesota Crookston on Saturday. The Mustangs defeated the Golden Eagles 3-1.

MARSHALL — After rolling to a sweep victory against Bemdiji State the night before, the No. 12 Southwest Minnesota State University volleyball team hoped to continue that trend against the University of Minnesota Crookston on Saturday. Thanks to a high-powered offensive display, the Mustangs did just that, as they took down the Golden Eagles 3-1 (25-13, 25-17, 25-27, 25-14) in the PE Gym.

SMSU coach Terry Culhane credited UMC for challenging their defense but said he was pleased with their performance on the offensive end throughout the match.

“I thought offensively we did a lot of things. We hit .425 as a team and that’s probably the best we’ve hit all year,” Culhane said. “I just think offensively we were good and they (UMC) did a good job of being aggressive and challenging our defense; that’s something that we’ve battled with all season.”

The Mustangs were able to take an early lead in Set 1, going up 7-2 thanks to a trio of service aces from Angela Young and Erin Corrigan. UMC would go on a 9-6 run to cut the deficit to just two at 13-11, but SMSU responded with a strong answer and build its first double-digit lead of the day at 23-13 before taking the opening frame 25-13.

SMSU used another solid start to begin Set 2 with a 10-5 advantage, but the Golden Eagles marched right back to tie things up at 12-12. The two teams would trade points over the next several possessions, with the margin never getting larger than four on either side until the Mustangs took a 19-14 lead on a Zoe Lier kill. SMSU continued to hold onto its lead down the stretch, closing the set with a 6-3 run to earn a 25-17 victory and take a 2-0 advantage in the match.

Looking to get themselves back into the match, the Golden Eagles went toe-to-toe with the Mustangs in Set 3, as the two sides never allowed any sort of separation the entire frame. UMC would reach match point on a pair of occasions, but Young came up with a kill to respond both times to keep things tied at 25-25. The Golden Eagles ultimately prevailed in the set, though, by getting the next two points to force a fourth frame.

Set 4 was another back-and-forth start, with SMSU holding a slim 9-7 lead before Payton Hjerleid went on a serving run that helped the Mustangs push their advantage to 14-7. SMSU held on to that lead the rest of the way, as three straight kills by Young closed things out to give the Mustangs their second consecutive win.

Young led the way with 26 kills while Jenna Walczak added 15 and Meg Schmidt and Lier each had 12. Emma Thomssen led in set assists with 45 while Alisa Bengen added 16. Hjerleid led in digs with 19 while Corrigan added 11 and Young had 10.

SMSU (13-6, 7-4 NSIC) will head back on the road next weekend to face St. Cloud State on Friday at 6 p.m. and Minnesota Duluth on Saturday at 4 p.m. Culhane said they were able to accomplish what they needed to do and they’ll look to replicate that against two quality opponents on the road next week.

“For us, we came into the weekend wanting to win twice and needing to win twice we felt, and now we go on the road to a good St. Cloud team and a good Duluth team,” Culhane said. “We’ve got to be able to handle that and I still believe there are plenty of things we can get better at but we’ll have to see how that shakes out.”