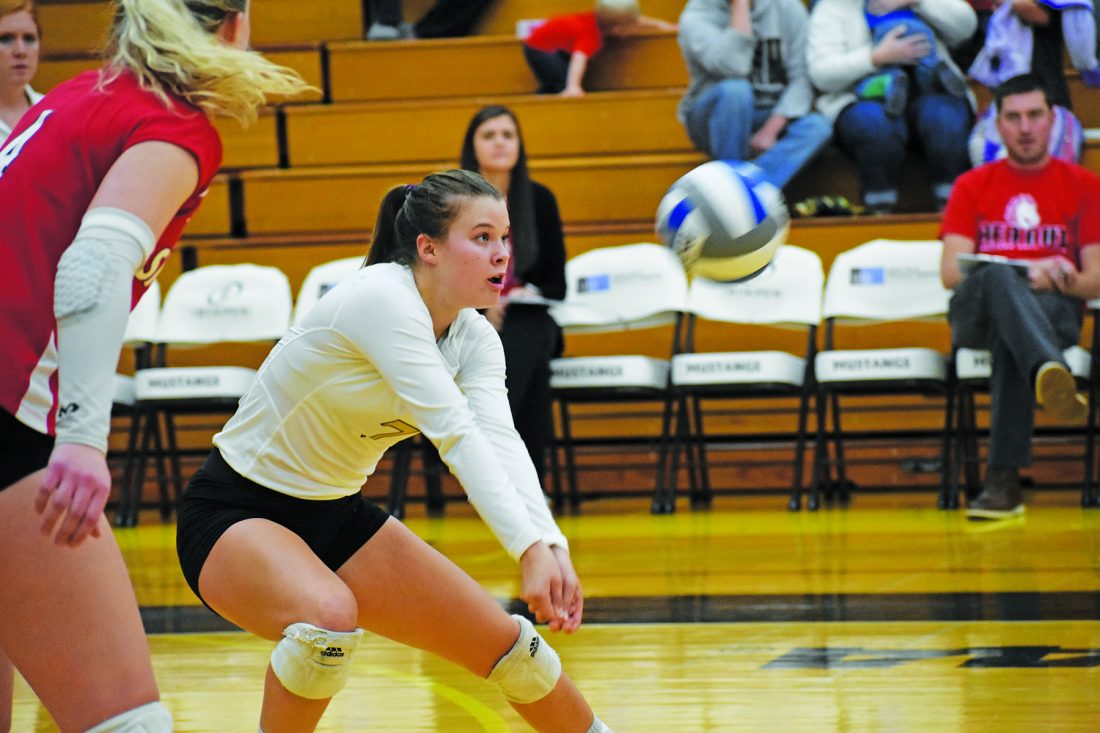 Independent file photo SMSU’s Payton Hjerleid passes the ball during their match against Upper Iowa last Friday. The Mustangs will begin its weekend against No. 7 Concordia-St. Paul this Friday.

MARSHALL — The No. 9 Southwest Minnesota State volleyball team (11-3, 5-1 NSIC) travels to No. 7 Concordia-St. Paul (11-3, 5-1 NSIC) Friday for a conference matchup selected in the NCAA DII Showcase to be aired on the NSIC Network, Division II Twitter, and Division II Facebook pages.

•SMSU will then travel to Minnesota State on Saturday for a 2 p.m. matchup at the Taylor Center in Mankato.

•SMSU went 1-1 last weekend with a sweep over a then-ranked, No. 22 Upper Iowa and a three-set loss to Winona State on Saturday.

•Junior Angela Young leads the team offensively with 204 kills and a 4.00 kills per set average.

•Emma Thomssen leads in assists with 323 and Alisa Bengen is right behind with 309.

•Payton Hjerleid leads the team defensively with 182 digs and 3.57 digs per set.

•Zoe Lier leads in blocks with 48 including 36 block assist and 12 block solos.

•SMSU notches the No. 9 spot in the latest AVCA poll released on Monday. This marks the 181st poll that SMSU has been featured in the Top-25.

•The game can be seen on the NSIC Network, on the Division II, NSIC, Concordia-St. Paul and Southwest Minnesota State Facebook pages (pending your approval), on the DII Twitter page at @NCAADII and through the Periscope app at @NCAADII.

•The game will also be available in Concordia’s video portal. The game will be produced by the NCAA’s production partner, Niles Media Group.

•SMSU and CSP met once this season in the Colorado Premier Challenge championship match as CSP claimed a 3-1 match victory.

•SMSU went 1-3 last season versus CSP with the last a five-set loss at the NCAA Tournament.

•Jasmine Mulvihill leads the Golden Bears with 196 kills and a 3.50 kills per set average. Erin Fallert is close behind with 173, and NSIC Preseason Player of the Year, Sara Macek, has 132.

•Payton Nutter paces CSP with 429 assists with a 7.94 assist per set average.

•Fallert was named NSIC Defensive Player of the Week as she recorded her eighth and ninth double-double of the season.

•Head coach Lori Rittenhouse-Wollmuth is in fifth season and has a 74-55 overall record.

•Morgan Olson leads the offense with 188 kills and 4.37 kills per set.

•Mara Quam leads the Maverick defense with 196 digs and 4.17 digs per set.

•Ashton Lee leads the Mavericks at the net with 36 blocks and 0.80 blocks per set.

•MSU is on a four-match losing streak with losses to Augustana and No. 15 Wayne State last weekend.

•SMSU leads the conference in team assists per set with 14.98.

•Lydia Sussner is ninth in the conference in hittting percentage with a 0.373 mark.

•Angela Young ranks third in total kills with kills 204 and fourth in total attacks with 515.