SMSU SOCCER: SMSU heads on the road to face MSU Mankato and CSP in weekend series 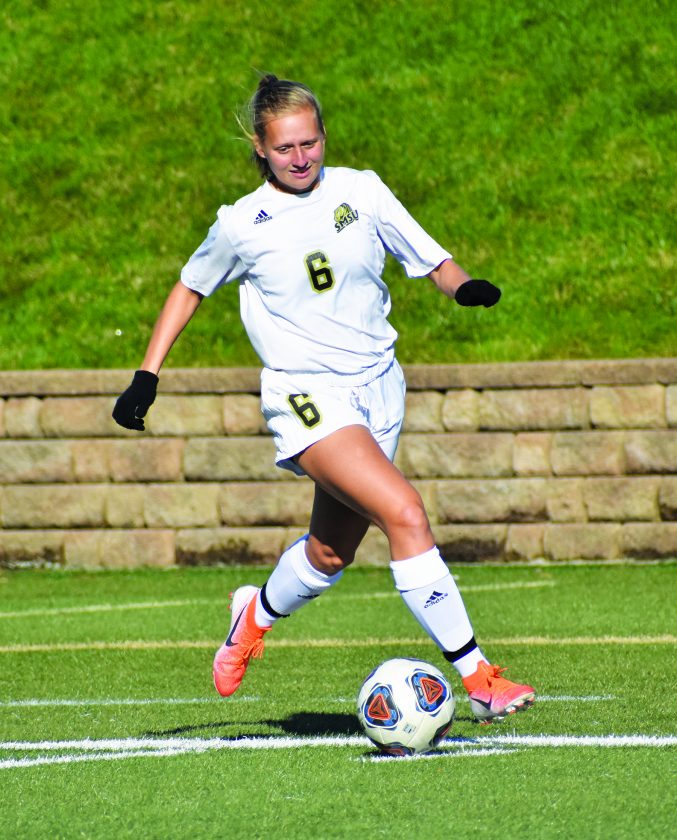 Independent file photo SMSU’s Erin Fisher controls the ball during their game against the University of Minnesota Crookston last Friday. The Mustangs will face MSU Mankato this Friday.

•The Mustangs went 1-1 in a weekend homestead with a 4-0 victory over Minnesota Crookston on Friday and a 3-1 loss to Bemidji State, snapping a four-game winning streak.

•Friday’s victory was the fourth shutout for the Mustangs this season.

•Alex Lotts surpassed Erin Fisher as the teams’ leading scorer as she recorded two goals this weekend. Fisher, Alli Miskowiec, and Abbey Hoisington trail right behind with three each.

•SMSU has fallen in the past five consecutive games as SMSU’s lone victory was a 2-1 notch in the NCAA tournament on Nov. 17, 2013.

•Brynn Desens leads the Mavericks in scoring with six goals on the season. Jenny Vetter adds five while Dakota Wendell has three goals and leads in shots with 48, 22 of them on goal.

•Alexa Rabune leads the MSU goalkeepers with a 6-1 record and 31 saves.

•The 2018 Maverick squad are the reigning NSIC tournament champs and have returned to the NCAA tournament all seasons under Bahl.

•MSU and SMSU are tied for third place, both teams are 4-2 in the NSIC and have 12 points.

•SMSU opened the series with a seven-game winning streak. The last winning streak for the Mustangs was a three-game street from 2013 to 2015.

•Leah Johnson and Nikki Anderson tie for the lead in goals with four each. Johnson leads in shots with 23, 12 of them on goal.

•Jordyn Clark is the primary goalkeeper for CSP with a 7-2 record. Clark has 35 saves off 89 shots faced.

•CSP ranks second in the NSIC with 12 conference points. CSP trails Bemidji State and Augustana who are tied for first with 16 points.

•SMSU’s true freshman Amanda Haimes holds a 6-2 record this season with four shutout victories. Haimes has 29 saves on the season, with a season-high six saves in the 2-1 victory over MSU Moorhead.

•Alex Lotts surpassed all scorers to take the lead with four goals.

•Abbey Hoisington, Alli Miskowiec, and Erin Fisher each have three.

•Olivia Harriger and Jessica Jugovich both have contributed one as well.

•Mustangs are led in scoring by Alex Lotts with four goals off 13 shots, seven of them on goal.

•Miskowiec also leads in assists with five as she had three over the weekend.

•With the 4-0 victory over Minnesota Crookston, the Mustangs successfully earned their first four-game conference winning streak since the 2013 season.