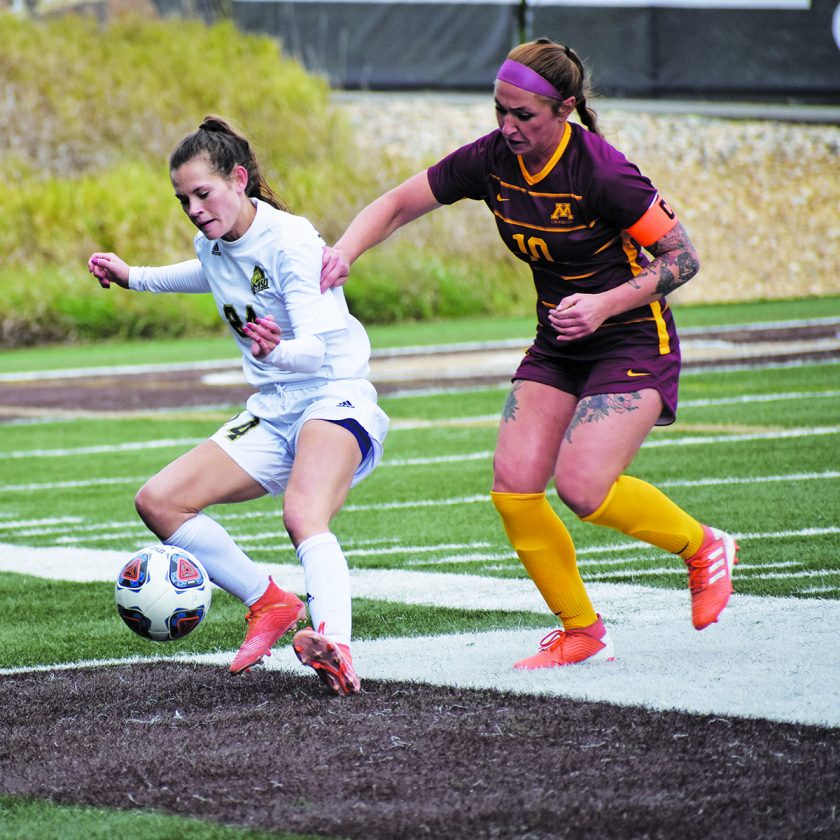 Photo by Sam Thiel SMSU’s Alex Lotts fends off a University of Minnesota Crookston defender during their game on Friday. The Mustangs defeated the Golden Eagles 4-0.

MARSHALL — After opening its conference schedule with a loss, the Southwest Minnesota State University soccer team has been bouncing back in a big way, with the Mustangs taking the next three games coming into Friday.

Meanwhile, on the other side of the field, the University of Minnesota Crookston Golden Eagles came into the game looking to snap a streak of their own, with UMC still in search of its first victory of the season.

Thanks to a pair of goals in both halves, it was the Mustangs who kept their streak going in the right direction in a 4-0 shutout at Mattke Field.

Despite coming away with the win, SMSU coach Erin Kasmarik-Mallett was a little disappointed with their defensive performance in the first half but added she was pleased with their ability to make the necessary adjustments going into the second half and use them to their advantage.

“I’m not going to lie, I thought it was shaky for us to begin with; I thought it was great that we got a couple of goals, but I thought defensively as a team we just didn’t do a good job of limiting their chances,” Kasmarik-Mallett said. “Four corner kicks in a half is not a good thing and one of those corner kicks ended up being a PK, so for us it wasn’t a great start, but I thought that our adjustments at halftime were really good. I thought they made all of the adjustments and our possession was a lot better, the chances that we generated was a lot better, so overall from the first to the second half it was better as we got along.”

After both sides opened the game with back-and-forth play and some quality chances, the Mustangs were able to capitalize first in the 21st minute when Abbey Hoisington broke free from the pack and connected with the back of the net off the assist from Miskowiec to give SMSU a 1-0 lead. The Mustangs weren’t done there, however, as the Miskowiec-Hoisington connection struck again, this time with Miskowiec scoring on a header from a corner kick by Hoisington just two minutes later to extend SMSU’s advantage to 2-0.

As the Mustangs looked to head into halftime with an early lead, the Golden Eagles had other ideas and gained a corner kick play of their own. Despite breaking up the play, SMSU was given a yellow card and UMC was awarded a penalty kick opportunity in the process.

Hoping to take advantage, the Golden Eagles connected on a line drive on the PK, but freshman goalkeeper Amanda Haimes made a diving stop to her right to come up with a huge save to maintain the Mustangs’ lead going into halftime. The save was one of four total for Haimes on the afternoon.

Kasmarik-Mallett said it’s important to have a goalkeeper that remains sharp throughout the entirety of the game and be able to call upon her to step up and make a play and feels that Haimes has continued to show that during the season.

“I think the one thing that you always need to be successful is you need a goalkeeper that when it matters, they can bail you out. That’s exactly what a penalty kick situation is; nine times out of 10, they should score that and all of the advantage goes to the attacker in the situation,” Kasmarik-Mallett said. “But if you have a goalkeeper that can bail you out in some of those situations, that’s really important and Amanda’s proved that so far this year that if she doesn’t have a whole lot to do, she’s still entirely tuned into the game that when we need her, she’s there for us. And I think it’s also the other way around where if she needs our backs and the rest of the team to be there for her, that happens as well.”

Coming out of the halftime break, the Mustangs looked to keep their foot on the gas pedal and did just that, as Miskowiec found the back of the net for the second time in the game and third on the season in the 56th minute to make it 3-0. Less than 10 minutes later, Alex Lotts challenged the UMC goalkeeper for a loose ball and won the battle, with the freshman drilling the ball into the wide-open net for her third score of the season and bring it to the 4-0 final.

Miskowiec said their key on the offensive end, especially in the second half, was winning the tight battles and creating quality scoring chances.

“We were able to pass and move quickly and take them one-on-one and win those battles, get a decent shot on net and follow it up and finish our chances,” Miskowiec said.

SMSU (6-1 overall, 4-1 NSIC) will wrap up the homestand against Bemidji State University on Sunday at 1 p.m. Kasmarik-Mallett knows it’ll be a tough matchup against the Beavers, but added as long as they stick to their gameplan, they can succeed.

“I think the first thing to understand is that it will not be like it was (Friday). Bemidji’s a very good team, they’re sound everywhere and they do a lot of things really well,” Kasmarik-Mallett said. “We do a lot of things really well and we just have to be prepared to understand that whoever does their things well the most is probably going to have upper hand and be able to win that game. We’re going to go at it and go for the win.”