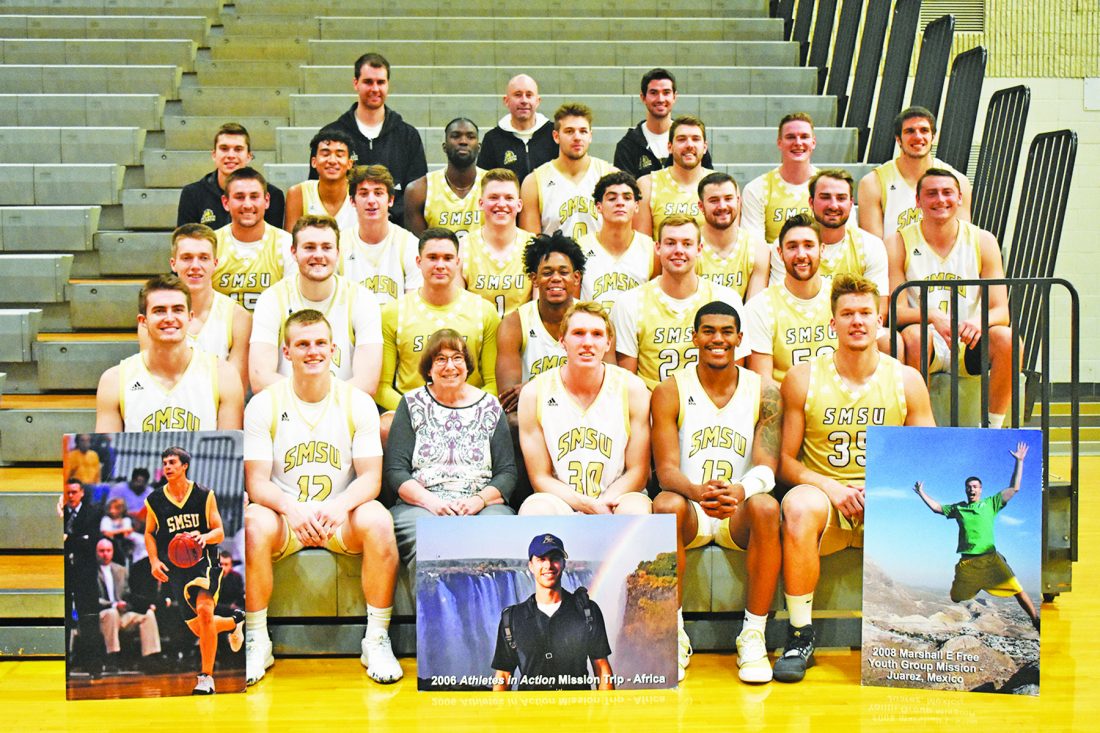 Photo by Sam Thiel The SMSU men’s basketball team and alumni team, along with Andy Wiersma’s mother, pose for a photo after the Andy Wiersma Alumni game on Saturday.

MARSHALL — The Southwest Minnesota State men’s basketball team connected on a layup with 1.7 seconds remaining to score a 91-90 victory over the SMSU Alumni team on Saturday as part of “Andy Wiersma Day” at SMSU.

Junior Nick Dufault led both teams, dropping 24 points in the game with 15 in the first half alone, while Braeden Hanson poured in 21 and went 5-of-5 from beyond the arc in the second half. Cliff McCray and Kenny Byers also had double digit figures as McCray finished with 16 and Byers pitched in 10.

SMSU coach Brad Bigler said it was fun to watch the two teams play each other and be able to do it for a great cause.

“It’s a lot of fun to just watch the interactions between the two groups. I thought the old guys made a lot of good shots and they really showed our young guys how to play the game the right way,” Bigler said. “And more importantly, it was for a great cause using Andy Wiersma’s legacy to donate back and to serve others and it was a great day.”

For the second consecutive year, alumnus Jordan Miller, paced the alumni team with 17 points with four 3-pointers in the second half. Joey Bartlett and Turner Moen were amongst Miller in alumni to drop double figures as Bartlett finished with 15 and Moen with 16.

Taylor Schafer, who played for the Mustangs from 2014-19, said it was really fun to be able to come back and play against the current team and it was a great experience.

“It’s pretty awesome; the brotherhood that coach Bigler has built with all of the guys and the alumni, I know that we come back and a lot of us alumni haven’t even played together and it’s like we’ve been together and we’re best friends,” Schafer said. “It’s awesome to come back and play against the current players and meet all the young guys and kind of tell them how things were back when we played and stuff like that, it’s a pretty great experience.”

The alumni game is played annually and is named in honor of the late Andy Wiersma.

Schafer said while he never got a chance to meet Wiersma, he knows that Andy was what being a Mustang is all about and it’s special to be able to give back to his family and the FCA community.

“I never got the chance to be around, be a teammate of, or meet Andy, but all of the stories that you hear, he’s the definition of a Mustang,” Schafer said. “It’s pretty awesome to come back and give back to his family and the FCA community a little bit. I also got to finally meet his mom, so that was really good experience.”

Southwest Minnesota State will play its next exhibition game on Monday, Oct. 28, at 7 p.m. versus the University of Minnesota at Williams Arena. Bigler said as they start to get their season underway, they need to work on the little things and just continue to improve each day.

“I just think you talk about a lot of the defensive fundamentals, shot selection; it’s always when the lights turn on for the first time, the game gets pretty fast, even for us, so just to be able to now get through that and go into a scrimmage against Dordt on Tuesday, we just need to continue to get better,” Bigler said.