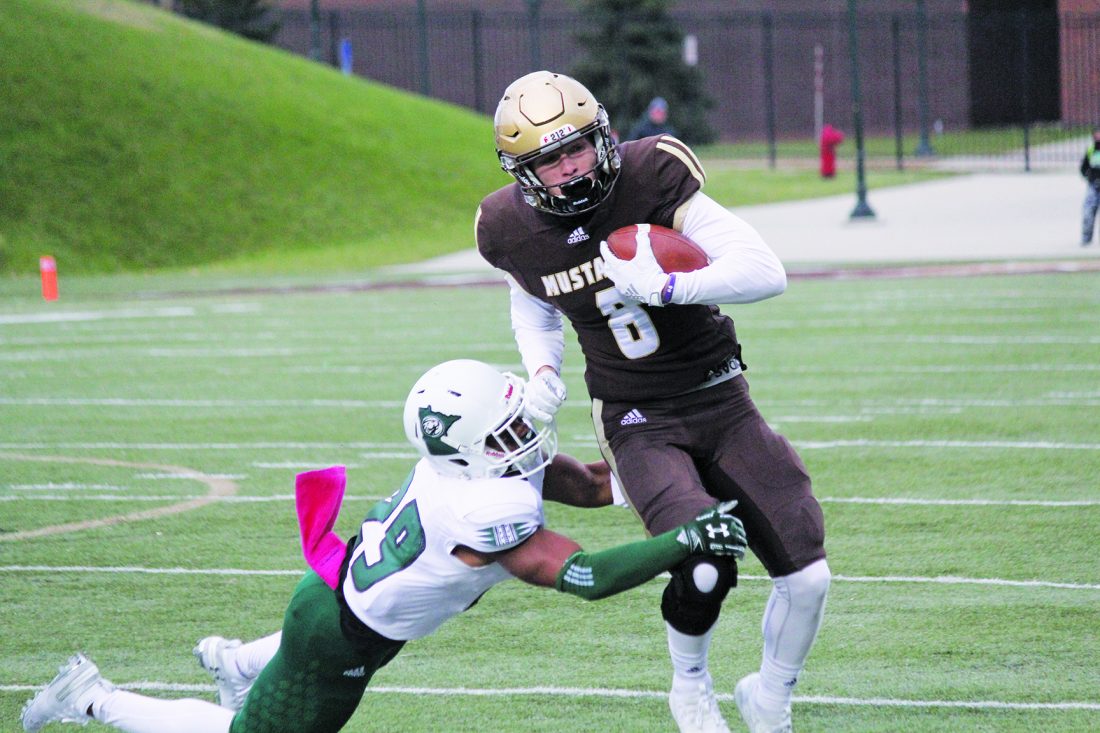 •Today’s game is the third of four straight versus NSIC North Division opponents for SMSU during the month of October. The Mustangs will resume NSIC South play at home on Nov. 2 versus Winona State.

•SCSU features one of the top defensive units in the NSIC allowing just 14 points per game. SCSU has not allowed more than 20 points in a game this season and has recorded 20 sacks.

SMSU coach Cory Sauter said while they weren’t able to close out the game and it was a tough loss to take, they were pleased with a lot of the things they did as a team and will take it as a positive opportunity moving forward.

“Obviously we did so many things well and so many things that we were really proud of. We had a really great week of work, we played extremely aggressive, physical and played 50 minutes of football and probably our best 50 minutes of the season. Unfortunately, we didn’t play extremely well down the stretch and one of the most improbable things happened and we ended up losing the game,” Sauter said. “It’s not easy to swallow, but the big thing for us is just going back to work, focusing in on our one-week cycle as we always do win or lose and I know that we’re excited about this next opportunity. The big thing for us is that it allowed us to grow together as a team and we’re going to use this as a positive, not only for 2019, but for 2020 and beyond.”

•Since 2012, when the NSIC schedule had each team playing four inter-divisional games, SMSU has a record of 17-13 versus NSIC North Division teams including 1-1 this season following last week’s loss to Bemidji State.

•SMSU finished 3-1 versus NSIC North opponents last season and is now 13-4 versus North Division teams since 2015.

•SMSU has outscored its opponents 82-55 in the second and third quarters this season, but has been outscored 85-24 in the fourth quarter and overtime.

•Davis, who has 116 career receptions in 17 career games, ranks second in the NSIC in receptions (37) and is third in receiving yards (512).

•Senior running back Max Simmons moved into sole possession of sixth place in the program record book with 2,250 rushing yards during last week’s loss to Bemidji State. He needs 14 yards to tie for fifth all-time with Warren Matthews (2009-12) at 2,264.

•Simmons also became the 12th player in team history to reach 3,000 all purpose yards in last week’s versus BSU.

•Simmons has racked up 10 career 100-yard rushing game ranking tied for third in team history. He needs one more to tie Zach Wysong for second all-time and three more to tie Tyler Tonderum for the program record.

•Simmons’ 58-yard rush at Minot State in week five was the longest play from scrimmage for SMSU this season.

•Sophomore Dakota Jaeschke caught four passes for 67 yards at Minot State, including grabbing a 49-yard Hail Mary touchdown to end the first half. It was his first career touchdown reception.

•Freshman Adien Belt ranks second in the NSIC averaging 42.3 yards per punt. Belt’s 64-yard punt in week three versus Sioux Falls was the longest by an SMSU punter since Mike Wenk had a 74-yarder versus Concordia-St. Paul on Nov. 1, 2014.

•SMSU held Minot State to 251 yards of total offense in week five, which is the lowest by a Mustang opponent this season. SMSU allowed just 12 first downs in the victory.

Sauter said defensively, they’ve been working on putting their team in pressure play situations, especially if a game is on the line, so that they are able to come up with a stop when they need one.

“We’ve been just trying to make as many situations in practice as competitive as possible. You’re always playing for something, always keeping track in terms of whether it’s 7-on-7 or team periods; being able to put pressure on our kids because where we’ve struggled the most is when the game is on the line,” Sauter said. “We need to find a way to get a stop, especially when everybody knows that if we get a stop, we win and if we don’t, we lose, so that’s just the things we’ve focused in on this week, constantly putting our kids in the toughest spots possible and seeing if we can respond and react to it.”

•Several transfers on defense have played major roles this season.

•Junior safety Garrett Chapman is second on the team with 51 tackles.

•Junior linebacker Gage Roberson ranks tied for third on the team with 46 tackles and has a team-high five for loss.

•Senior safety Davaeon Johnson ranks tied for third on the team with 46 tackles with one interception, while junior cornerback Marshawn Reese has 24 tackles and a team-leading two interceptions.

•Following a shutout loss on Nov. 5, 2011, SMSU has since scored 30 or more points in nearly half of its games.

•Dating back to the final game of the 2011 season through six games this season, SMSU has scored 30 or more points in 37 of its last 85 games.

•SMSU hasn’t been as prolific scoring in the last two-plus seasons, having reached the 30-point plateau just five times in its last 32 games since Oct. 20, 2016, which includes three last season and once this season.

Sauter said on the offensive end, they need to continue to maintain a high level of production on first and second downs to create more manageable third-down situations against a tough St. Cloud State defense.

“We’re playing a very good St. Cloud defense, they only give up about 14 points per game and they’re going to be one of the tougher defenses that we’ll face this year, so we’ll have our hands full in terms of being able to score points and move the football. They do a nice job on third downs and getting off the field so we definitely need to keep the trend of trying to get some third and manageables,” Sauter said. “The last three weeks, we’ve done a solid job of converting and part of that is just having some production on first and second down and we want to continue that mentality. This past game we gave up zero sacks and had zero turnovers, so we did a lot of really good things and we’re really proud of our guys. Now the biggest thing is to stay hungry and do it again. As well as we played, we still have to find a way to close out the game and get another first down, so there’s always more and things that we’ve got to work on, but I think we’ve taken a step forward with a lot of things and now we’ve got to be hungry enough to continue that path.”

•SCSU’s last four games have been down-to-the-wire affairs with each game decided by six or less points, including the last three by three points each.

•SCSU is coming off a 16-13 overtime loss at Augustana last Saturday. The Huskies tied the game with a field goal with four seconds remaining in regulation, but fumbled on its first drive of overtime. Augustana was able to kick a field goal on its possesion to secure the victory.

•SCSU was held to 23 yards rushing on 32 attempts, totaled just 207 yards of offense and finished with 12 first downs.

•Senior quarterback Dwayne Lawhorn has completed 82 of 182 passes for 1,028 yards with 10 touchdowns and three interceptions. He has also rushed for 110 yards and two touchdowns.

•Sophomore running back Joe Blando has a team-high 288 yards rushing and one touchdown on 81 carries.

•Sophomore linebacker Devon Krzanowski has racked up a team-high 42 tackles with seven for loss.