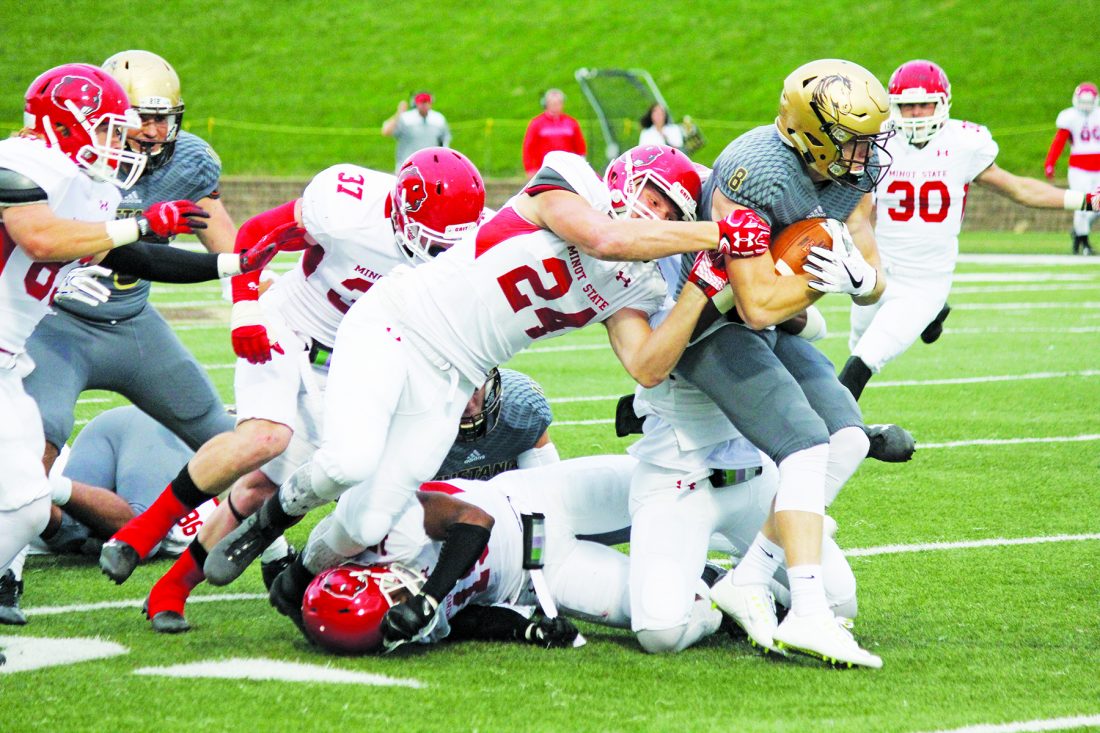 •Today’s game is the first of four straight games versus NSIC North Division opponents for SMSU during the month of October. The Mustangs will resume NSIC South play at home on Nov. 2 versus Winona State.

•SMSU’s next victory will be the 200th in the program’s 52-year history.

•Since 2012, when the NSIC schedule had each team playing four inter-divisional games, SMSU has a record of 16-12 versus NSIC North Division teams.

SMSU coach Cory Sauter said it’s never easy to go on the road and earn a win but felt they made a lot of great improvements leading up to the game and it was a great feeling to get their first win of the season.

“Obviously you go on the road, it’s never easy and we were very focused going into the ballgame and we put it together,” Sauter said. “Most of the week we certainly were making some major strides and one of our points of emphasis was to run the football more effectively and we were able to accomplish that finally here this season and it was certainly a good feeling to get that first win under our belt.”

•SMSU did not allow a sack in Saturday’s win for the first time all season.

•Senior running back Max Simmons’ 51-yard rushing touchdown last Saturday was the longest play from scrimmage for SMSU this season.

•SMSU rushed for 158 yards in the win at Upper Iowa. It was the first time in six games–dating back to last season–that SMSU reached 100 yards rushing in a single-game.

•Senior running back Max Simmons moved into sole possession of seventh place in the program career rushing record book with 2,026 yards. He needs 220 yards to tie for sixth and 238 to move into fifth place.

Sauter added now that they have gotten a win under their belt, they know they can’t just sit back and they have to hit the refresh button against a solid Minot State team that they’ve had some close battles with in the past few years.

“We know we can do it once and now it’s about if we can do it again. That’s what we’re chasing right now and as we’ve been telling our guys, we’ve won one football game so we don’t have all of the answers,” Sauter said. “The tendency (after a win) is to relax and feel good about yourself, but we’re starting all over again trying to find a way to win one this week, so we’ve got to have a short memory and we’re going back on the road again on an even longer trip. The last time we played Minot we had a very close ballgame and picked one off in the end zone on the last play of the game. We’ve had some battles against them; in 2015, we ended up beating them by a point at their place. They’re sitting at 2-2 and they’re playing good football now as well so it’ll be a great matchup.”

•Dating back to the final game of the 2011 season through four games this season, SMSU has scored 30 or more points in 37 of its last 83 games.

•Aldrich was an assistant coach at SMSU for two seasons (2015-16) prior to taking the MISU job.

•Minot State has won its last two games which is the program’s first two-game winning streak since 2012.

•Junior quarterback Ben Bolinske has completed 53 of 98 passes for 601 yards with four touchdowns and three interceptions. He has also rushed for 150 yards and one touchdown on 37 attempts.

•Junior running back Isaiah Hall has 191 yards rushing and one touchdown on 57 attempts.