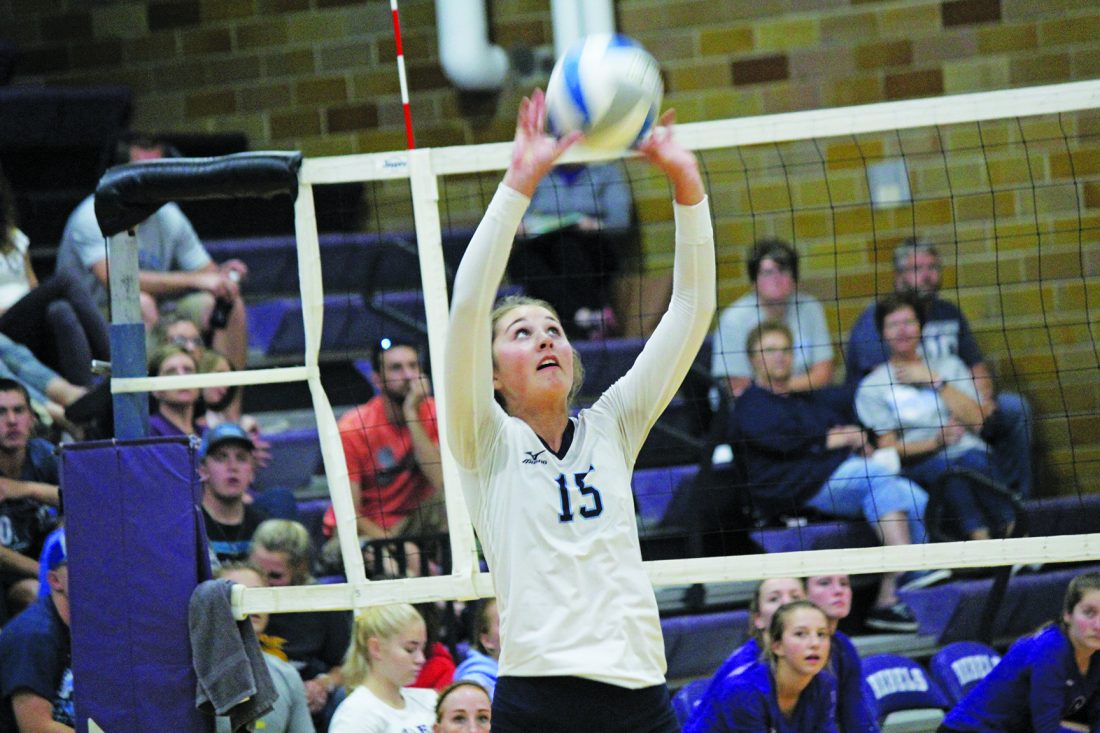 Photo by Jake Przytarski RTR’s Rylie Hess sets the ball during their match against MCC on Monday. The Knights defeated the Rebels 3-0.

SLAYTON — The Russell-Tyler-Ruthton volleyball team shook off a slow start in the opening set of Monday’s non-conference matchup against Murray County Central before finding its rhythm for the remainder of the match to defeat the Rebels in straight sets.

RTR’s Haley Muenchow, who finished as the match leader in kills with 12, said the team came out a little rusty to start the opening set, but is pleased overall with the team’s performance.

“I think that we played pretty good even though we started off a little rough, a little rusty,” said Muenchow. “I thought that we got back into it and tried to keep our energy up as well as we can.”

MCC coach Kate DeLong was proud of the way her team stepped up in game one, but said an inability to shake off mental errors proved costly in the final two sets.

“The girls stepped up really great in game one for a Monday. We always seem to struggle to get in the groove on Mondays,” said DeLong. “We made a couple small mental errors and that carried through to the other two sets. (It’s) something that we’ve worked a lot on this season. Sometimes we get into those little ruts and we can’t move past our mental game.”

The Rebels were able to capitalize on a sluggish start by the Knights in the early goings of the first set by taking a narrow 6-5 lead that grew to 12-9 moments later. The advantage was short-lived, however, as RTR climbed back to take its first lead at 16-15 before going on a crucial 5-1 run highlighted by a pair of aces by Maddi Wendland to make it 21-16. The Knights would fend off a late push by MCC to take the set 25-20.

Muenchow pointed to more cohesive play by her team as the key to their turnaround.

“We definitely had to get our hits in and work better as a team to be able to get our energy up, because our energy was so low,” said Muenchow. “We weren’t passing well, we weren’t setting or hitting well (either). As soon as we got that all together and got our energy up then everything just kind of came together.”

With the boost in energy, RTR was able to flip the script in the final two sets by jumping out to commanding leads that they never looked back from. The Knights went on to take the second set 25-10, and the third set 25-12.

The Knights (14-6) will be back in action today when they take on Camden Conference leader Minneota on the road at 7:15 p.m. Muenchow says the team needs to maintain energy throughout their matches.

“I think we can build off of (the win) by staying mentally strong and always knowing that we have to have energy to get through, because without energy we don’t play well,” said Muenchow.

The Rebels (5-8) will travel to Okabena today to take on Heron Lake-Okabena in a Red Rock Conference matchup at 7:15 p.m. DeLong wants members of the team to shake off mental mistakes and focus on the next play.

“(Today) we’re going to have to step up and really bring it against a tough Heron Lake-Okabena team who’s in our conference, but you know we talked with the girls a lot it’s just a mental switch,” said DeLong. “You make a bad play that’s expected. Everybody has errors, you have to make changes.”