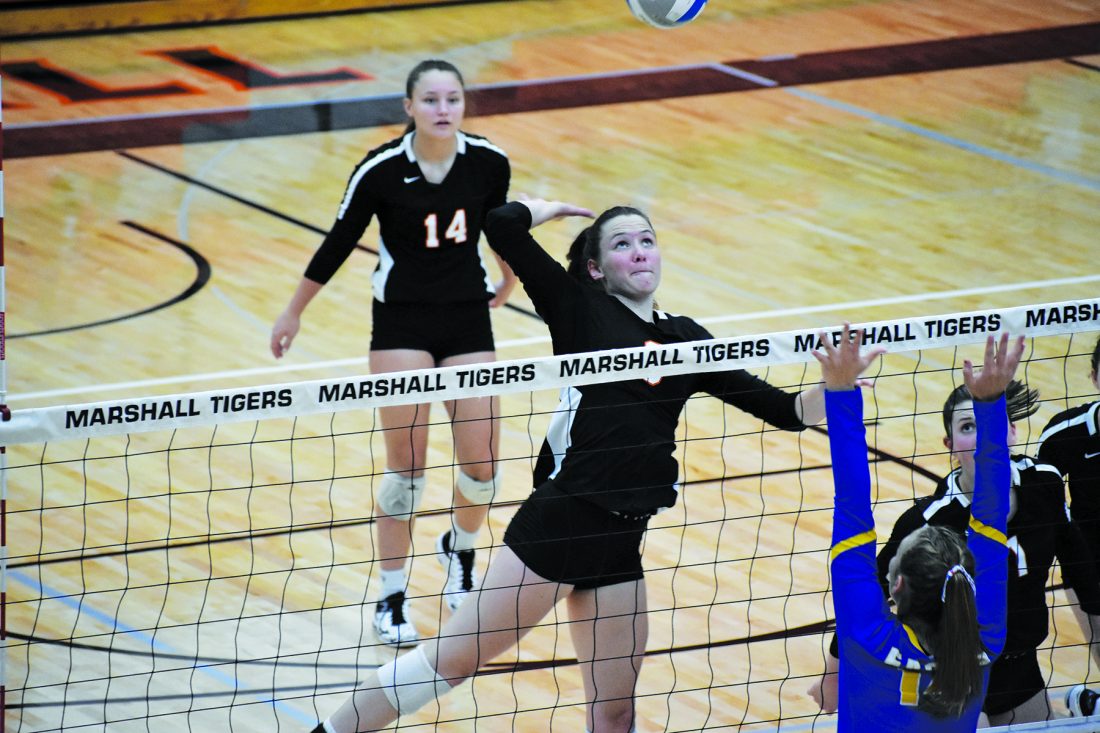 Photo by Sam Thiel Marshall’s Paige Andries goes up for a kill during their match against Windom Area on Thursday. The Tigers defeated the Eagles 3-0.

MARSHALL — It’s not often you see a team play nearly their entire regular season without a true home game. Despite having eight games as the home side of the scoreboard under its belt, the Marshall volleyball team had yet to play on its own floor due to an equipment fire over the summer while they were refinishing the court.

With a raucous crowd behind them, Marshall was able to overcome some tight play early on before using key plays down the stretch to earn a 3-0 (25-12, 25-14, 25-18) victory over Windom Area on Thursday night.

After spending a month and a half away from their friendly confines, the Tigers were welcomed back by a packed Marshall High School gym, and senior middle hitter Paige Andries was glad to be “home” for the first time.

“I think it’s great to be home,” she said. “Everyone cheered us on and the student section was great and the little kids supported us and it was a great atmosphere overall.”

Marshall coach Dan Westby said even though they were able to come away with a win in the end, he felt they had to grind things out and weren’t able to get things going over the course of the match.

“It was kind of a grind and it just kind of felt like we had a difficult time getting anything going all night long. We did what we had to do, we came out and got off to a great start and then we kind of relaxed for a bit and they came back,” Westby said. “You have a few of those throughout the course of the season where it’s just a grind and it kind of felt like that’s what it was [Thursday].”

The Tigers appeared to be in control right from the first serve, earning the first five points of the opening set before a 5-2 run by Windom cut the deficit to 7-5. Marshall would cling to a slim lead over the next few points, as an ace by Jordyn Hilgemann gave the Tigers a 14-10 advantage midway through the frame. In need of a push, Marshall quickly found some late momentum to take its first double-digit lead of the night at 22-12 before claiming Set 1, 25-12.

Unlike Marshall’s quick-start approach in the first set, the second and third sets were tightly contested, as the two teams traded points in the beginning moments of each frame. But both times Windom appeared to make a strong case at extending the match, Marshall was able to have an answer and make plays down the stretch to take both sets.

The second frame saw the Tigers hold onto their lead before gradually increasing their advantage to eight on a pair of occasions at 16-8 and 20-12 en route to a 25-14 win. Looking to put the Eagles away, Marshall opened the third frame with a 7-6 lead before using a key 11-3 run that was highlighted by a string of kills from Bria Morris and Emily Meier to push the Tigers to an 18-9 advantage. Windom Area was able to battle back in the waning moments, drawing to within six in a match-point run, but the Tigers got the final point they needed and took the final set 25-18 to earn the sweep.

Westby said as the match went on, they were able use their serving to put some pressure on Windom Area, but acknowledged his team had some trouble adjusting to the slower pace of play.

“I thought we did a nice job all night of serving the ball. We put a lot of pressure on them and made it difficult for them, but again, the pace of the match was just so slow and I don’t think we handled that very well,” Westby said. “But like I said, you’re going to have matches like that throughout the course of the season.”

A number of players helped make contributions to the Tigers’ effort on Thursday. Offensively, Paige Andries led the way with nine kills while Logan Sherman and Meier each added seven and Morris had six. Rachel Schwarz led in set assists with 20 while Sherman added 15.

Westby said he felt they did a nice job of mixing things up on offense as well as limiting their errors on the attack.

“I thought we were able to mix things up offensively; I thought Paige did a lot of things in the middle for us and everybody kind of took their turn,” Westby said. “We were also able to limit errors and I thought that made it difficult for Windom Area.”

On defense, Mia Schnaible anchored the back row with 19 digs while Hilgemann added 16 and Schwarz had 14. Up front, Meier led in blocks with three while Andries tacked on another.

Marshall (17-4) continues its homestand with three more games to start its week, beginning with a matchup against Sioux Falls Lincoln on Monday at 7:15 p.m. Westby said this week will be another key stretch for their team as they head towards the final parts of the regular season.

“We’ve got an important week next week,” Westby said. “We’re at home Monday, Tuesday and Thursday and then we go to Lakeville, so it’s going to be a big week for us. We’re going to need to be sharper than we were here.”