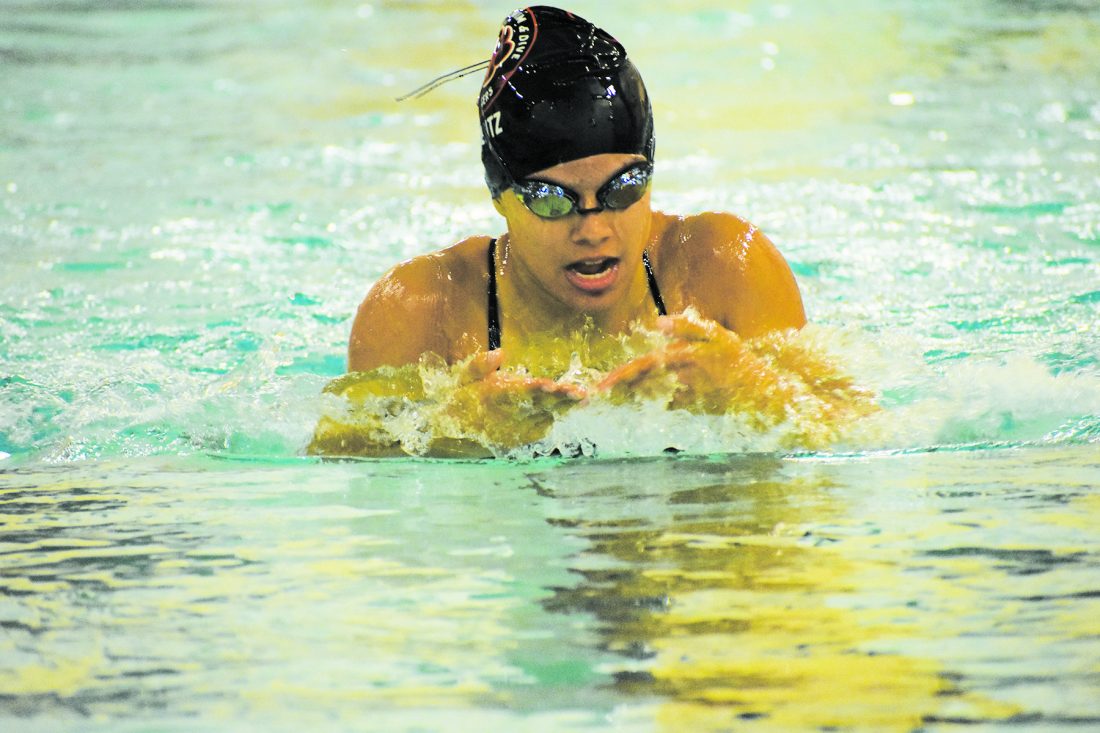 Photo by Sam Thiel Marshall’s Nyssa Bentz competes in the 200 yard individual medley during their meet against Mound Westonka on Tuesday. The Tigers fell to the White Hawks 111-75

MARSHALL — Coming off an impressive victory in Willmar last week, the Marshall girls swimming and diving team returned home with a challenging task in front of them against Mound Westonka/Holy Family. The Tigers posted several strong times – including some season-bests – throughout the evening, but the White Hawks were able to come out on top in an 111-75 victory over Marshall on Monday night.

Despite the final outcome, Marshall coach Nikki Bell said she was extremely pleased with her athletes and felt they gave it their all in between the lanes against a solid Mound Westonka /Holy Family team.

“I was really excited about Kaylie’s (Stucke) 500, that was a season-best for her, Emma Beavers’ 1:14 in the breaststroke; we had a lot of season-best times,” coach Bell said. “Mound was ranked fourth in 3A, we were just at the Maroon and Gold Invite and they’re ranked ahead of Delano that got second, so numberswise and talentwise, we knew it was going to be tough, but I was very pleased with my athletes. Attitudewise, they got up there and raced and tried to get their hands on the wall. We had some best times and they at least respected their opponents by getting up there and enjoying that they had people to race.”

Marshall also had a couple of relay teams earn top finishes on the night. In the 200 yard freestyle relay, the team of Schmidtke, Stucke, Hurst and Bentz (1:43.39) narrowly edged Mound Westonka/Holy Family’s Annie Springer, Jaylyn Storm, Kathryn Collins and Zella Lucas (1:43.89) for the first-place finish, while the team of Maddie Larson, Condezo, Brandt and Beavers took fifth with a time of 1:58.57.

Schmidtke, Stucke, Hurst and Bentz also won the 400 yard freestyle relay with a time of 3:47.00 while the team of Johnson, Bell, Kopitski and Bader took fourth with a time of 4:09.20.

Coach Bell said one of their keys throughout the meet was just having some time off in between competitions and be able to rest up for Monday. She added they’ve also been working on their tempo and saw some positives from that standpoint.

“Honestly, we’ve had a really tight turnaround time in meets, so they were a little bit more rested as far as competitionwise. We just had our first Saturday off in a while before a meet so that helped a little bit,” coach Bell said. “We’ve been working on our tempo, our freestyle and sprinting and I saw some positive results with that on the 200 and 400 free relays because we’re trying to shorten up our strokes to get ready for championship season.”

Marshall will compete next on Oct. 12 in Hutchinson before closing out the regular season against Montevideo and St. Peter in a pair of duals.