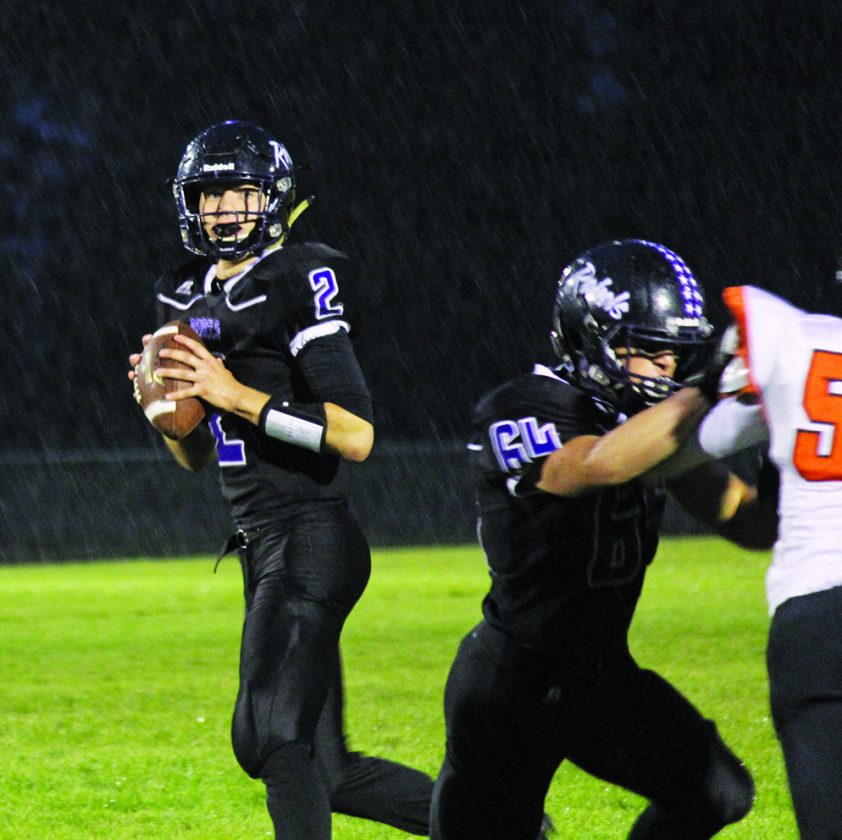 Photo by Jake Przytarski MCC’s Blake Schmitz drops back to pass during their game against Sleepy Eye on Friday. The Rebels defeated Sleepy Eye 29-8.

SLAYTON — A stingy performance by the Murray County Central defense combined with a big day on the ground by running back Dylan Johnson helped to extend the team’s winning streak to three games on Friday as the Rebels blew past Sleepy Eye in a 29-8 final in Slayton.

Throughout the first half of the contest, both teams were forced to make adjustments in the face of pouring rain. The less than ideal weather did little to slow down MCC’s offense in the first quarter, however, as the Rebels took advantage of prime field position set up by a long punt return by Johnson to score their first touchdown of the game on a one-yard quarterback sneak by Blake Schmitz.

After forcing a punt on Sleepy Eye’s opening drive, MCC’s defense stepped up again with its first of two turnovers in the half on an interception by Brayden Ahlers. Ahlers managed to navigate his way into the end zone on the return, but a holding penalty brought the football back to midfield where the Rebels set up shop looking to add to their lead.

Guided by the team’s leading-rusher in Johnson, MCC marched down the field with eight minutes left to play before halftime and capitalized on Sleepy Eye’s turnover with a three-yard touchdown by Johnson and added a two-point conversion to make it 16-0.

With the clock winding down in the half, Sleepy Eye’s offense looked to get on the board but another interception, this time by Kyler Deacon, flipped the field and put the Rebels back on offense with just under three minutes left to play in the half. The drive would fall short though, as the Rebels turned the ball over on downs and took a two-score lead into the break.

In the third quarter, the Rebels continued to give the ball to Johnson, who finished the game with 29 carries and nearly 200 yards rushing to go along with a pair of touchdowns. His second score gave MCC a 23-0 lead midway through the quarter.

MCC maintained its 23-point advantage into the fourth quarter before adding their fourth and final touchdown on a QB keeper by Schmitz from three yards out. The Indians responded with a touchdown of their own to avoid the shutout, but it was too little too late as the Rebels walked off the field victorious in a 29-8 final.

With the win, MCC improves 5-1 on the season and will look to extend its winning streak to four games next Friday when the team travels to Tracy to take on rival Tracy-Milroy-Balaton at 7 p.m.