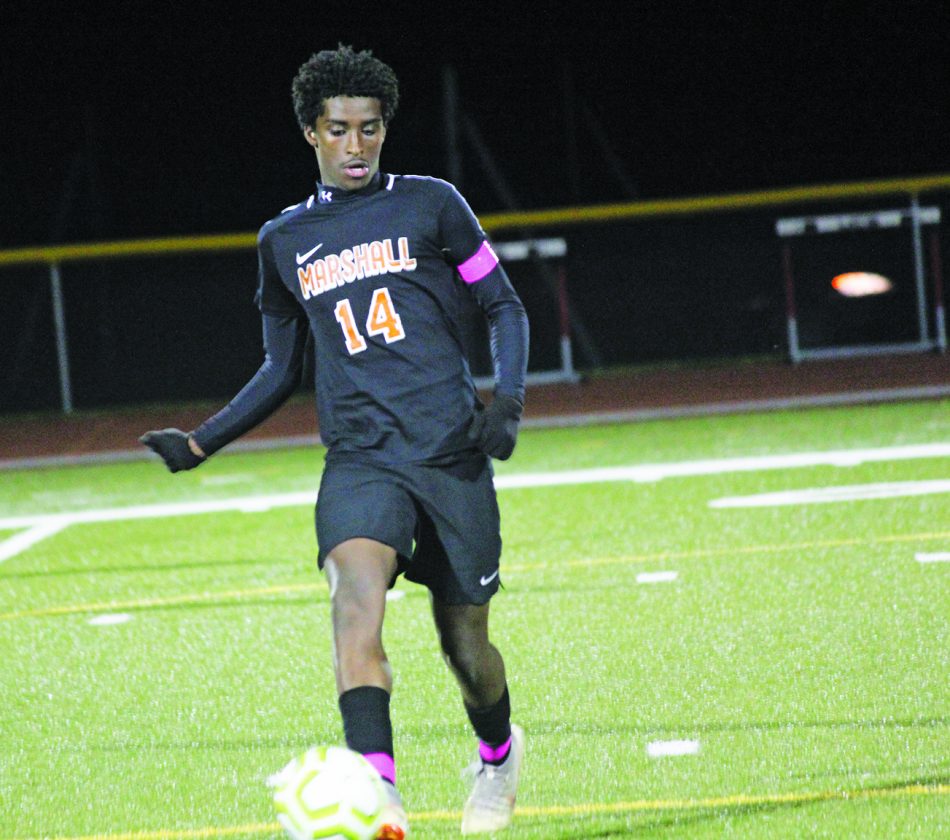 Photo by Jake Przytarski Marshall’s Maher Abdallah controls the ball during their game against Fairmont on Tuesday. The Tigers defeated the Cardinals 1-0.

MARSHALL — With 6:14 left to play in a scoreless game against Fairmont, Marshall’s Mookae Stee broke the deadlock with his eighth goal of the year in what stood as the game-winner for the Tigers in a 1-0 final score.

Teammate Hugo Cifuentes said the focus in Tuesday’s win was to compete as a team in order to play their best with sections approaching.

“I think tonight we just were trying to work as a family as we’re going into sections,” said Cifuentes. “If we’re going to be strong then we have to win these games and show that we can come into the section games and do what we do.”

Coach Roberto Esparza was happy to come away with a win but disappointed with the team’s overall performance after they were unable to play at the same level that they did against New Ulm in their previous match.

“They never played the way I want them to play. They didn’t play the way they did last game against New Ulm,” said Esparza. “For us I was thinking that it was going to be a more easy game.”

In the first half, Fairmont was able to get the better of the play early on by controlling possession of the ball and generating three corner kicks that failed to click. Marshall was able to turn things around late by putting together its first of many scoring opportunities, including a near-goal in the final minute when Stee found Eli Salisbury all alone in front of the net. Salisbury got a strong shot off, but the goalkeeper made a diving save to keep it 0-0.

The late scoring chance by the Tigers in the first half fueled the team to an even stronger second half filled with multiple scoring chances beginning with the team’s first corner kick of the game coming two minutes in that Amin Aden was able to deflect on net with a diving header.

Nick Kayser, Stee, Maher Abdallah and Salisbury continued to push the pace and gave the Cardinal defenders all they could handle with shot after shot finding its way on net. Still, the score remained the same as none of the shots found the back of the net.

The Tigers’ fortunes changed late in the second half, however, as Stee pounced on a rebound with a sea of players from both teams around the net and scored with 6:14 left to play. Fairmont did its best to find an equalizer but failed as Marshall held on to win the match 1-0.

Next up for Marshall (7-3-3) is a road game against Mankato West on Thursday at 7 p.m. Esparza plans to breakdown film of the Scarlets in the coming days in order to see what they’ll need to improve on.