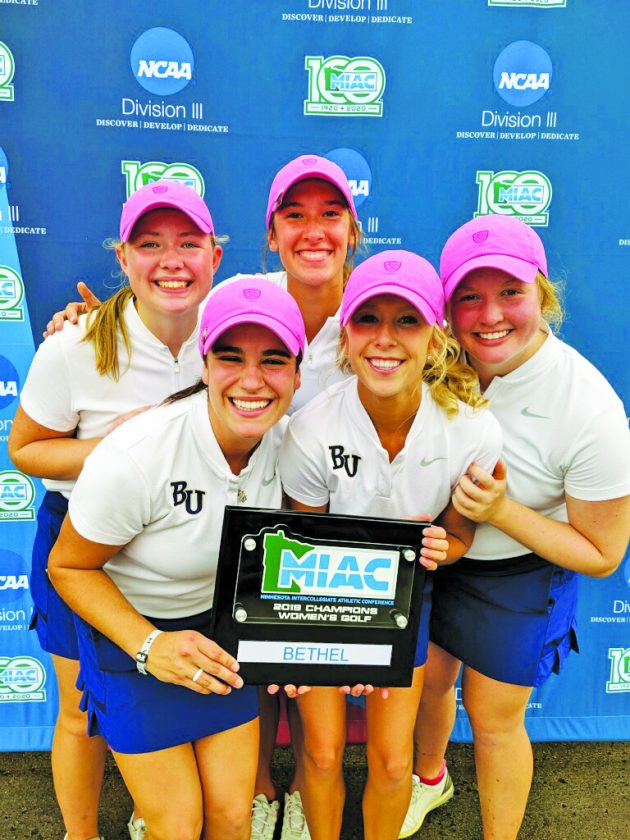 Photo courtesy of Bethel Women’s Golf Members of the Bethel University women’s golf team pose with their trophy after winning the MIAC Championships on Monday.

BECKER — It was a day to remember as the Bethel University women’s golf team earned the program’s first-ever MIAC Championship title on Monday. The Royals overcame a five stroke deficit coming into the final day earning the 2019 title and league’s automatic bid to the 2020 NCAA Women’s Golf Championship set for May 12-15 in Palm Beach Gardens, Fla. at the PGA National Resort-Palmer Course.

“It was one of those great moments all day,” said head coach Trent Anderson. “We said were not going to look at the score at all. Were going to have our gals play there very best and their coaches believed in them. If we played free, live we’ve always said, our score will take care of itself. They played unbelievable at the end and I am just grateful for the nonstop effort.”

The No.18-ranked Royals shot a tournament-best 308 in the final round to edge out No. 15-ranked St. Catherine by two strokes. BU’s 941 (+77) – which is the sixth-best 54-hole mark in MIAC Championship history – is a program best edging out the previous mark of 956 which the Royals recorded in their MIAC Runner-up finish in 2015. No. 9-ranked Carleton finished third with a 964.

The Royals started out strong on the front nine trading off leads with St. Catherine. As the final three groups came off a tough 14th hole the Royals deficit was back down to five strokes. Showing no panic Bethel continued to play its game getting back-to-back birdies from Ana Schwarz on the 15th and 16th green. Junior Nicole Miller sealed the title with a par on the final hole.

Miller finished the tournament 13-over placing second and earning All-Championship Team honors. She shot a five-over in the final round that was highlighted by a birdie and turning point for the Royals on the par-five 470 yard 16th hole just moments after Schwarz accomplished the same feat.

Freshman Anna Tollefson got better as the weekend went out using a two-over 74 in the final round finishing fifth among the 53 individuals with a 234 (+18). Her eight-stroke improvement from round one earned her All-Championships Team honors as well as an automatic spot on the All-Conference team come spring.

Schwarz has a bid day on the links looking like a veteran on the greens. After shooting an 82 in round two, Schwarz climbed her way up the leaderboard matching a career-best 75 in the final round finishing in a tie for 6th with a 235 (+19) and earning All-Championship Team honors. Schwarz bogeyed her opening hole before hitting par the rest of the way on the front nine. She was two-over before triple-bogeying a tough 14th hole. She showed no panic tapping in clutch birdies on 15 and 16 which came as the turning point to put the Royals back on top. On the 18th Schwarz stayed out of the bunker on the left side tapping in for par and leaving the rest of the work for Miller who at the time didn’t know she needed a bogey or better to seal the victory.

Playing in her final MIAC Championships, senior Katie Engelking finished in a tie for 17th shooting a 246 (+30) for the weekend. Engelking set the tone for the day birding two of the first three holes. She went even on the front nine before a 10-over on the back nine gave her an 82 in the final round.

Sophomore Elena Zaborniak rounded out the lineup placing in a tie for 29th. Zaborniak shot an eight-over on the front and back nine in the final round finishing with an 88. She shot a 254 (+38) for the weekend.