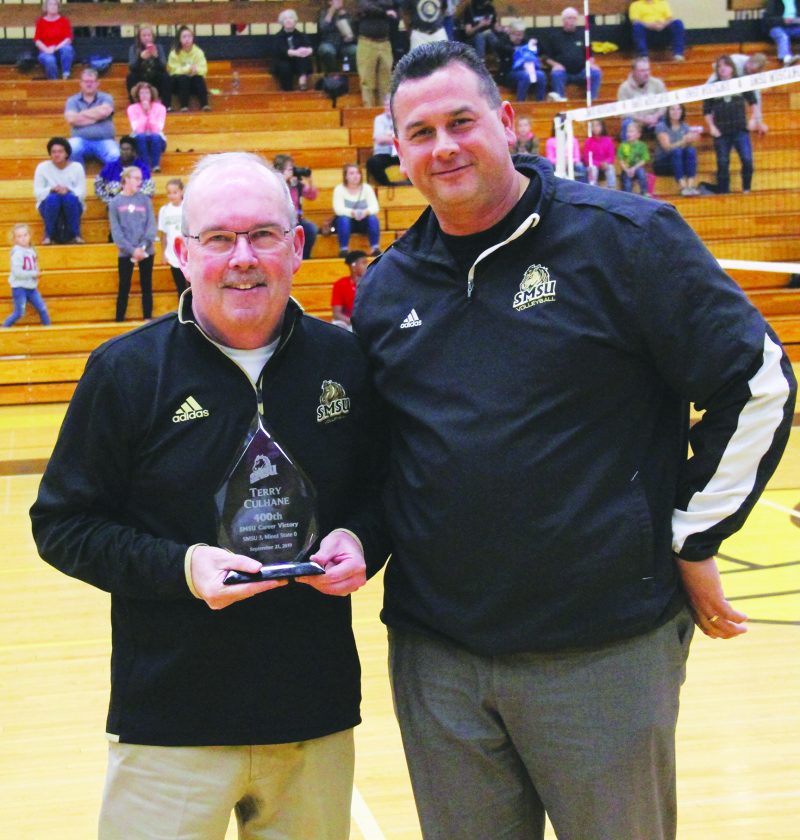 MARSHALL — Southwest Minnesota State University volleyball coach Terry Culhane can recall the first time he was on the sideline leading the Mustangs. What he didn’t know at the time, though, was the journey it would take him on.

That match, a 3-0 sweep over Colorado State-Pueblo on Aug. 27, 2004, marked the beginning of a storied career at the helm for Culhane. Since that opening match to start the 2004 season, the Mustangs have averaged 25 wins per year under Culhane and have reached the NCAA Tournament in each of his 15 seasons, including a runner-up finish in 2014.

On Sept. 21, Culhane achieved the milestone victory, as the Mustangs defeated Minot State University 3-0 to give him 400 career wins.

Culhane said he wasn’t aware of reaching the milestone at the time.

“I didn’t even know it was happening,” Culhane said. “What it kind of means is that I’ve been coaching a long time. I can remember the very first match I coached here and it didn’t seem like 400 wins ago.”

With SMSU’s two victories this past weekend, Culhane currently has a record of 402-108. Culhane added he’s grateful to be around good people throughout his career and have the chance to coach good kids each year.

“It’s just something that over those 400 matches, you’re just getting a lot of chances to coach good kids and meet good people,” Culhane said. “To me, it’s not about the number, it’s just a reminder of all of the people that we get a chance to work with.”