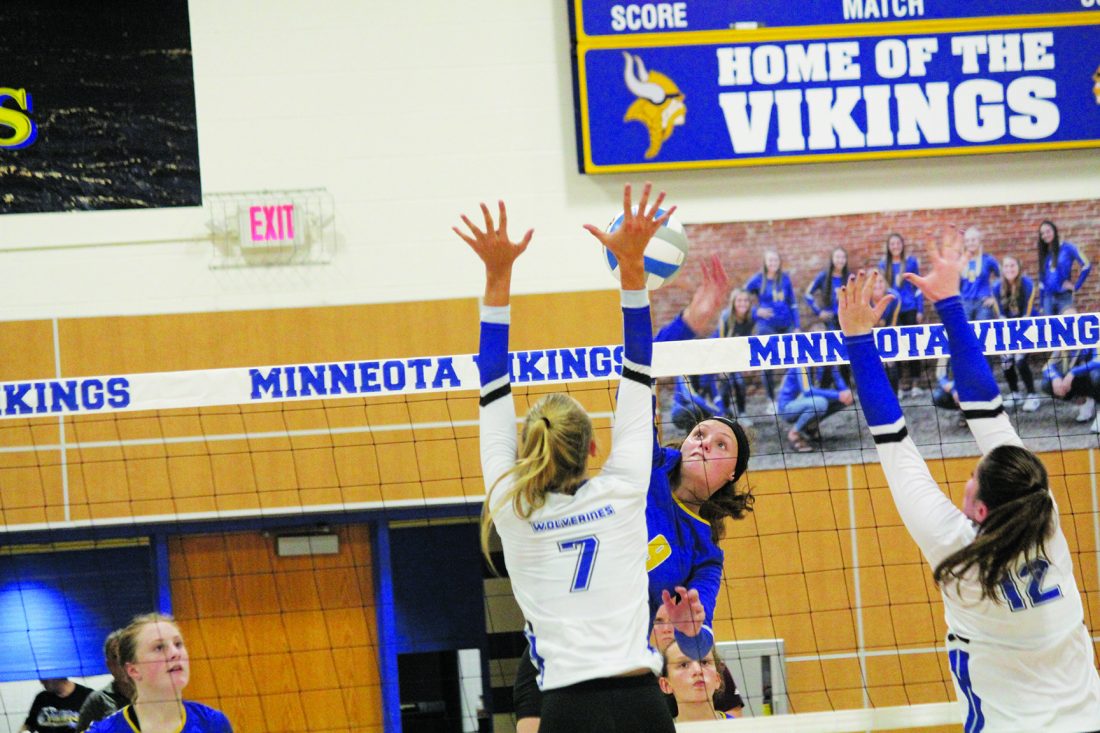 Photo by Jake Przytarski Minneota’ Abby Frie goes up for a kill attempt during their match against MACCRAY on Tuesday. The Vikings defeated the Wolverines 3-0.

MINNEOTA - Fresh off of a fifth-place finish in the 32-team Southwest Challenge tournament this past weekend, the top-ranked Minneota volleyball team returned to its home gym on Tuesday and dispatched Camden Conference-foe MACCRAY in straight sets.

Minneota outside hitter Natalee Rolbiecki identified constant pressure as one of the keys to their success in Tuesday’s victory.

“We just put pressure on them and we never gave them easy balls so they were never in system,” said Rolbiecki. “And our block was strong.”

It was a dominant showing right from the opening serve for the Vikings, who opened up the first set with 6-1 run to force a MACCRAY timeout to regroup. The break did little to slow down the surging Minneota offense, however, as an ace by Ellie Pesch highlighted a dominant 12-1 run that provided the Vikings with a comfortable 18-2 lead. The Wolverines would outscore the Vikings 9-7 down the stretch, but Minneota held on to take the first set 25-11.

In the second set, MACCRAY was able to build some confidence after the lopsided finish by taking their first lead of the match at 2-0. Undeterred, the Vikings responded with a 7-0 run, and continued to push the pace midway through the set until their lead climbed to 17-5. Minneota went on to take set two 25-7.

The Wolverines provided much more of a fight in the third set than in the previous two by weathering an early offensive barrage by the Vikings that provided them with an 18-8 lead. From there, MACCRAY slowly crept back into the set by outscoring Minneota 9-5 to make it 23-17 down the stretch. The comeback would fall short in the end, though, as the Vikings dug in and took the set 25-19, and the match 3-0.

The victory for Minneota improves their record to 9-1 on the season. They will look to earn win No. 10 on Thursday when they travel to Renville to take on Renville County West at 7:15 p.m.

With momentum continuing to build for the Vikings, Rolbiecki expects the team to approach Thursday’s matchup with the same mentality that’s provided them with a great deal of success so far this season.

“We’ll keep doing what we’re doing,” said Rolbiecki. “We’ll keep serving aggressive and pushing pins and getting everyone involved so that our offense works well.”