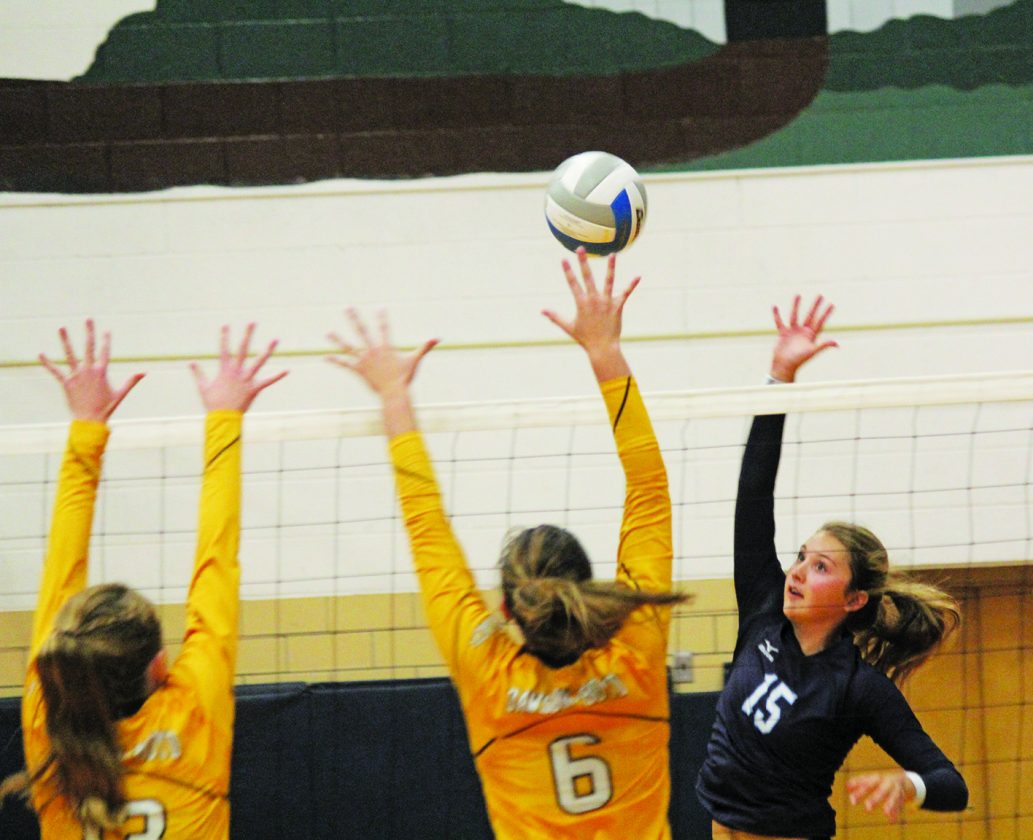 Photo by Jake Przytarski RTR’s Rylie Hess hits the ball over a pair of Dawson-Boyd defenders during their match on Tuesday. The Knights defeated Dawson-Boyd 3-0.

TYLER – The Russell-Tyler-Ruthton volleyball team kept its unblemished Camden Conference record intact on Tuesday by defeating the visiting Dawson-Boyd Blackjacks in a three-set sweep. The victory for the Knights improves their record to 5-0 in conference play and 9-2 overall.

“We had a lot of energy that we probably haven’t had in the past,” said Schreurs. “I had a really good front row and put the ball down so give a lot of credit to my hitters.”

Dawson-Boyd coach Andrea Lee said the team had their hands full with a talented RTR group and went on to identify their need to play as a cohesive unit as an area in need of improvement.

“I think we have a lot to work on (today) at practice. RTR is a really good team,” said Lee. The main thing that I said after the game is we need to learn how to work together as a team. “We can’t just have one girl that’s being successful a night. We have to figure out how all six of them on the court can work together so we can get each point won.”

RTR’s Kalleigh Carr got the Knights out to a strong start behind the service line in the opening set by guiding the team to an early 3-0 lead that was never relinquished. The Knights would continue to push the pace with set-assists leader Schreurs and hitters Haley Muenchow and Rylie Hess establishing an efficient attack to increase their lead to 20-10. RTR went on to win the set comfortably in a 25-14 final.

Dawson-Boyd took its first and only lead of the match early in the second set at 3-2, but the narrow advantage was short-lived as the Knights answered with a 4-0 surge highlighted by a Muenchow ace. RTR’s lead would grow to 18-9 following a 12-6 run before an ace by Dawson-Boyd’s Tarah Johnson get her team back on track and inspired a late rally. It was not enough, however, as the Knights took the second set 25-15 following a Schreurs kill.

The energy that lifted the Knights to victories in the first two sets continued in the final set as RTR opened things up with a dominant 11-3 run before a kill by Dawson-Boyd’s Avery Bartunek momentarily ended the offensive onslaught. The Blackjacks responded by outscoring the Knights 6-4 midway through the set, but RTR got the better of the play down the stretch to seal the match with a 25-14 set win.

Both teams will return to the court on Thursday as RTR will travel to Kerkhoven-Murdock-Sunburg for a 7:15 p.m. start, while the Blackjacks will host Minneota in another 7:15 p.m. start.

Schreurs said the team will need to get proper rest in order to be ready for a busy week of volleyball.

“We have a long week this week. We play Monday, Tuesday, Thursday, Friday and Saturday so we need to get a lot of rest,” said Schreurs. “We need to keep going and push all the way through. We know we can do it.”