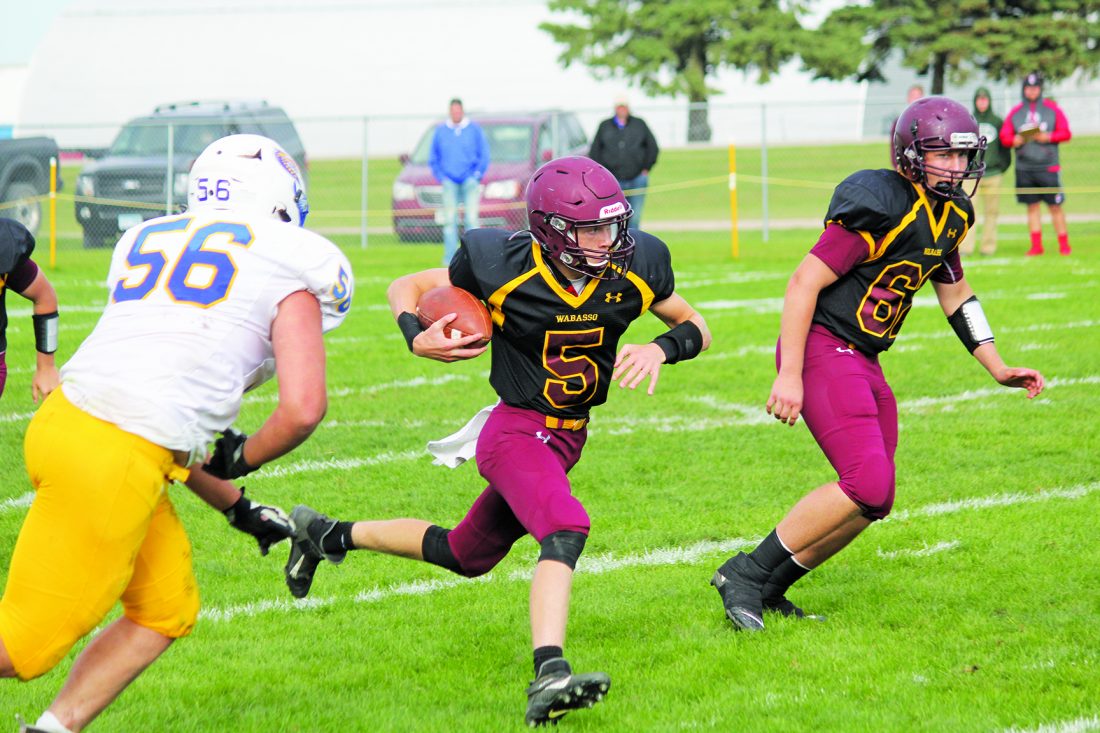 Photo by Jake Przytarski Wabasso’s Carter Benz carries the ball during their game against Adrian on Saturday. The Rabbits defeated the Dragons 34-0.

WABASSO — With an opening drive touchdown, the Wabasso football team set the tone right out the gate in Saturday’s homecoming game matchup against Adrian and kept its foot on the gas all the way to the end in a 34-0 shutout victory over the Dragons.

Rabbits coach Joe Kemp identified the fast start for his team as one of the keys to their success in the win.

“We just got off to a really fast start and got our athletes in space,” said Kemp. “Adrian’s big and their physical in the middle and we were able to get some angles and do some good things between the tackles.”

Wabasso’s offense sent a message on its very first series that began at midfield and ended with a one-yard touchdown run by Carter Benz, his first of two in the contest. The scoring-drive was aided by a long run by fullback Lance Wagner, who finished the game with 64 yards on 11 carries and a touchdown in the fourth quarter.

Feeding off of the momentum generated by the offense, the Rabbits forced their first of four straight three-and-outs on defense. The Dragons would finish the half with only two first downs and six total by the end of the game.

Late in the first quarter, the Rabbits added two touchdowns in a two-minute span beginning with a 19-yard touchdown pass from Benz to Will Carlson to make it 13-0 following a blocked extra point.

After forcing another three and out, the Rabbits blocked a punt deep in Adrian territory to give the ball back to the offense in the waning seconds of the first quarter. Wabasso needed just one play to make them pay following the miscue as leading-rusher Nick Marotzke followed his blockers and found his way into the end zone for his first of two touchdowns. Marotzke finished the game with 81 yards on 12 carries.

The score remained 20-0 all the way into the third quarter when Adrian came out of the half determined to put points on the board. The Dragons were able to match their first-down total in the opening series of the third quarter and marched all the way into Wabasso territory before a fumble recovered by Marotzke ended the scoring threat and gave the ball back to the Rabbits.

With the offensive line continuing to provide the necessary running room, the Rabbits crossed midfield on multiple hard runs by Marotzke before the drive momentarily stalled with a fourth and short situation. Instead of punting, Wabasso went deep in its bag of tricks to execute a fake punt to keep the drive alive. The crucial series would end moments later with a six-yard touchdown pass from Benz to Marotzke to make it 27-0.

Kemp said the defensive stop and ensuing offensive drive were crucial in turning the tide.

“It got us back in control a little bit. Adrian kind of turned the tide with their power-running game and started moving the ball and controlling the clock,” said Kemp. “For us to get the big stop and come back and turn the tables back on them a little bit and get the touchdown that was big for us to respond.”

With the game all but sealed, the Rabbits added an exclamation point on their dominant performance with another touchdown, this time by Wagner, to make it 34-0.

Next up for Wabasso (4-1) will be a road matchup against Springfield on Friday at 7 p.m. Kemp expects a challenge from the talented Tigers and wants to see his team continue to improve.