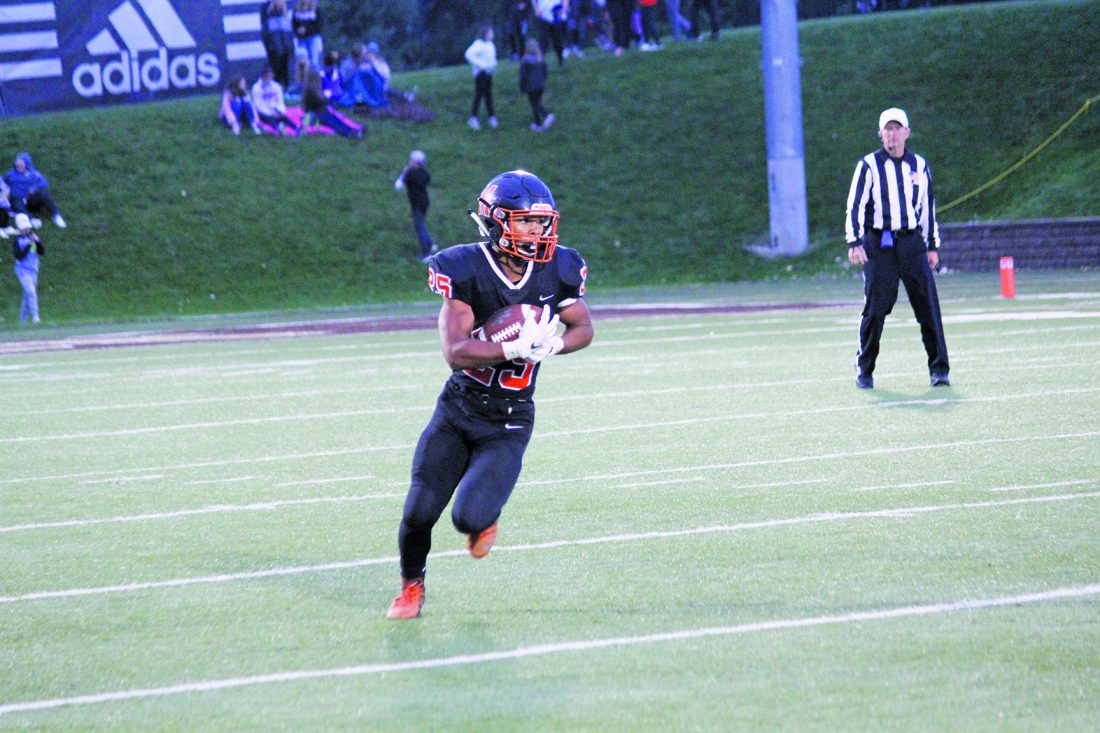 Photo by Jake Przytarski Marshall’s Gabe Raini carries the ball during their game against New Ulm on Friday. The Tigers defeated the Eagles 68-0.

MARSHALL — A 59-point first half guided by a four-touchdown burst by quarterback Konnor Aufenthie gave the Marshall football team the lift it needed to dispatch the visiting Eagles of New Ulm in a 68-0 final.

The Tiger defense, which limited the Eagles to just 15 yards of total offense and only one first down, was equally dominant in the winning performance. Coach Terry Bahlmann applauded the unit for controlling the line of scrimmage throughout the contest.

“I think our defense really controlled the line of scrimmage. I think we held them to one first down the whole game so we were dominant on that side,” said Bahlmann.

The Tigers were able to open up the scoring on their very first drive of the game set up by a screen pass to running back Gabe Raini who broke multiple tackles before being brought down deep in the Eagles red zone.

After making it a point of emphasis leading up to the game, Bahlmann came away pleased with Raini’s physical running in the win.

“Well we didn’t think we broke many tackles last week so that was an emphasis for us this week and he came out and did a good job,” said Bahlmann. “He took it to heart and I thought he ran really hard and that’s what we need out of him each week.”

The Tigers went on to capitalize with a 13-yard touchdown run by Brayden Hilgemann to make it 7-0 following an extra point by Hugo Cifuentes.

After the ensuing kickoff sailed out of bounds, the New Ulm offense set up shop at its own 40-yard line, but was unable to take advantage of the favorable field position as the series ended with their first of six consecutive three-and-outs in the first half.

Back on offense, the Tigers continued to find room to run on its second series and navigated its way down to New Ulm’s five-yard line following big gains on the ground by Raini. The promising drive was cut short at the five-yard line, however, as the Eagles recorded the game’s first turnover with a fumble recovery deep in their own territory.

Following the miscue on offense, the Tigers bounced back with a defensive stand and a blocked punt for a safety to extend their lead to 9-0. On the ensuing drive, Aufenthie scored his first of four total touchdowns combined through the air and on the ground in the first half via a goal-line plunge to make it 17-0 through one quarter of play.

The Marshall offense kicked into another gear to begin the second quarter by scoring six touchdowns beginning with a reverse play that put the ball in the hands of Dean Pochardt for a 29-yard score to make it 23-0.

Bahlmann said the offense was able to take advantage of New Ulm’s attempt to stop the run by spreading the ball around and presenting different looks.

“They really stuffed the box on our runs so we spread the ball around, gave them some different looks and we fumbled once down there and that shouldn’t happen but otherwise we played a pretty good football game,” said Bahlmann.

With all of Marshall’s scoring drives capped off by rushing touchdowns up to that point, the Tigers took to the air and connected as Bryce Lance hauled in a 31-yard touchdown grab to make it 31-0 following a two-point conversion. Tight end Trey Steinbach would find the end zone moments later on a 29-yard touchdown passing play to add to their lead.

The Tigers would close out the half with three more touchdowns, including Pochardt’s second of the game on a seven-yard pass play. Before the final second ticked off the clock, Raini would cross the goal line twice more for the team’s final two scores to make it 59-0 at halftime.

With the game all but decided, the Tigers opened up the second half with their second string players taking over for the remainder of the contest. Marshall would add a 1-yard touchdown run by backup quarterback Brevin Runia in the fourth quarter and later recorded their second safety of the game to make it 68-0.

Next up for the Tigers (5-0) is a road-matchup against Worthington at 7:15 p.m. Bahlmann is focused on seeing the team continue to improve on a week to week basis.

“We just have to keep getting better. We’re improving each week and we have to keep that going,” said Bahlmann. “We have a couple of injuries we have to take care of this week and we’ll see how they go but otherwise the next man needs to step up.”