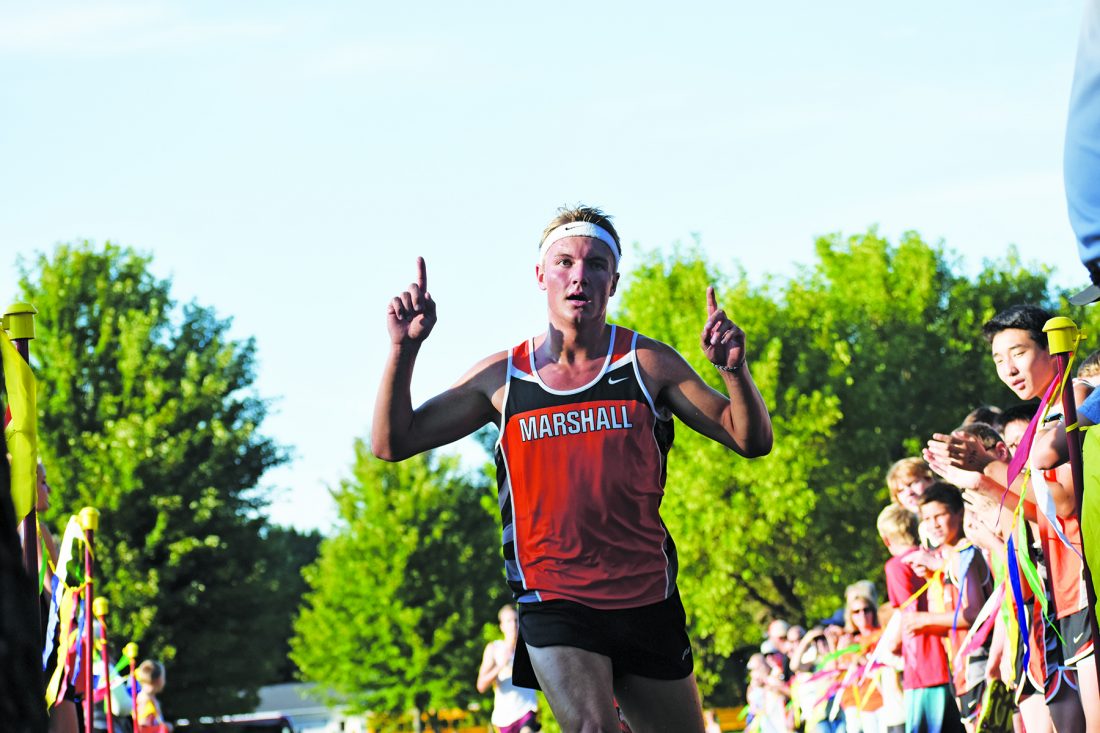 Photo by Sam Thiel Marshall’s Zach Matzner reacts after winning the boys race during the Marshall Invitational at Independence Park on Tuesday.

MARSHALL – Rain postponed the race for a day, but a number of area programs came together for a race at Independence Park in Marshall on Tuesday.

The Marshall girls cross country team won the girls race with a team score of 37. Murray County Central/Fulda came in second place with 53 points, followed by Redwood Valley (76) and Canby/Minneota (77). Pipestone Area and Springfield/Cedar Mountain finished in a tie for fifth place with 136 points, while Tracy-Milroy-Balaton placed seventh at 204.

Marshall had a pack of three runners finish near the front of the race. Bellamy Sukalski placed third with a time of 20:11.1, while Jersey Leyson (20:36.3) and Cameen McFarquhar (20:55.6) placed fifth and sixth, respectively.

Marshall girls coach Marie Sample said their key was having some of the younger runners come in and fill in spots with some of their runners resting and she was proud of the way they stepped up to the challenge.

“We had the gameplan of going out and just running a strong race. We’re resting a few runners, so we didn’t have our complete team, which was fine, and it gave other runners a chance to step up and fill scoring spots on the girls side, which was really fun for them,” coach Sample said. “I think they really stepped up to the challenge and ran great races, so I’m super proud of them and happy for them and it’s always nice to finish first on your home course.”

Zach Matzner also put in a strong performance on his home course, winning the boys race with a time of 17:00.2. He edged out Mitchell Buerkle of S/CM by less than four seconds.

Marshall boys coach Brian Leibfried said overall they struggled a little bit in some areas, especially in the middle of the race, and felt that it led to the final outcome.

“Kind of looking through it, it seemed like we were a little flat for whatever reason,” Leibfried said. “Our strategy has been to kind of take the first mile pretty controlled and then start picking it up from there, and throughout the race it kind of seemed like we weren’t able to pick up as many places during that second mile as we thought we could and I think that overall led to where we finished the race as a team.”

Leibfried added their biggest takeaway is to use Thursday’s meet at Hutchinson to help see where they measure against the other teams in their section early in the season as well as continue to work on closing out races a little bit stronger.

“We’re going to race on Thursday, we’re not sure how it’s going to go with the short turnaround, but we’re going to bring a guy up for his first race on Thursday, so that will help us a little bit on the team side of things,” Leibfried said. “We’ll see a little bit more of our section at Hutchinson, so anytime we can see if we’re gaining ground on the teams versus earlier in the year, I think that’s going to be the focus and we’ll see if we can keep working on that last mile to see if we can close the deal.”

The TMB boys did not have enough runners to register a team score. Sawyer Schwartz placed 21st at 19:44.6 to lead the team.

Yellow Medicine East had one runner in Tuesday’s race. Kylie Knollenberg placed 21st in the girls race at 22:27.7.