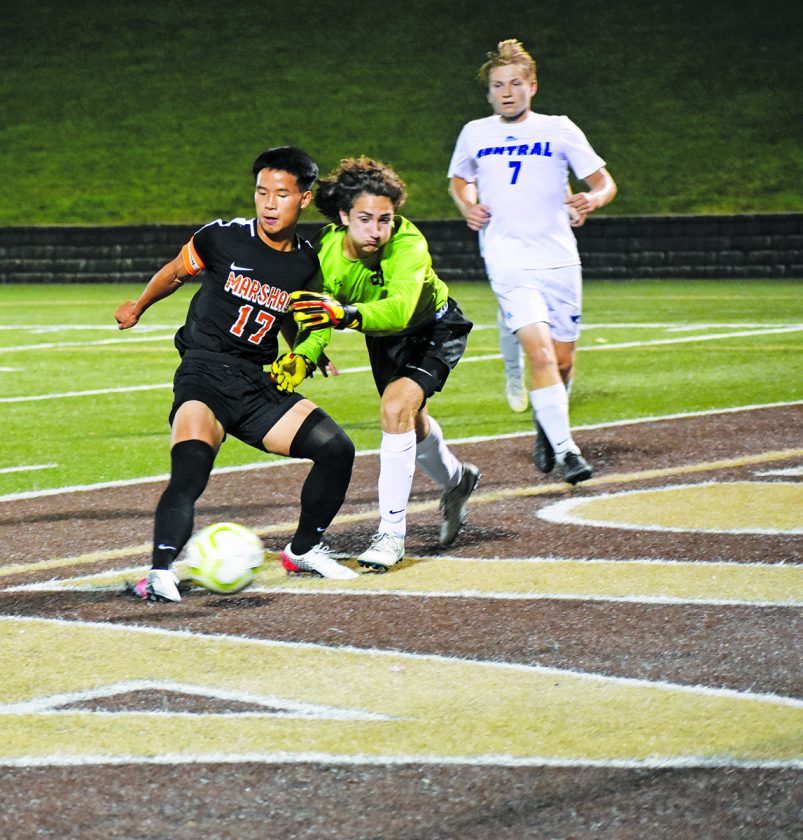 Photo by Sam Thiel Marshall’s Mookae Stee kicks the ball around the Central Minnesota Christian goalkeeper to score a goal during their game on Monday. The Tigers defeated the Bluejays 6-1.

MARSHALL – After not capitalizing on the offensive end in a shutout loss to Waseca on Saturday, the Marshall boys soccer team made sure that wasn’t the case the next time they took the pitch.

A four-goal first half by the Tigers highlighted an offensive barrage as Marshall earned a 6-1 rout over Central Minnesota Christian on Monday night at Mattke Field.

Despite finding their offensive groove, the Tigers struggled to get things going in the first few minutes, as CMCS controlled the ball early on before striking first to take the 1-0 lead.

Marshall coach Roberto Esparza said he wasn’t pleased with his group’s efforts in the opening minutes but credited them for finding a way to turn things around quickly.

“The first five minutes I didn’t like the way we started playing,” Esparza said. “I was ready to try some different players but I told them to wake up or they would go to the bench. They woke up and ended up doing a good job.”

Marshall’s offense woke up in full force, as Mookae Stee tied things up at 1-1 with 29:45 left in the first half before a free kick goal from Eh Thay Su John gave the Tigers the lead for good. Marshall wasn’t done there in the opening frame, however, as Mazin Abdaliah found the back of the net to make it 3-1 before the Tigers were awarded a penalty kick with under seven minutes left. Eli Salisbury stepped up and buried the shot to push Marshall’s lead to 4-1, which it held going into halftime.

The Tigers continued to add on to their advantage to begin the second half, with Hugo Cifuentes finding the back of the net with 32:48 left before Stee beat the goalkeeper to the ball and found his second goal of the night near the midway mark of the half to bring it to the 6-1 final.

Marshall will continue its homestand on Thursday when it faces Mankato Loyola at 7:15 p.m. Esparza said this game was a good wake-up call for their team and hopes they can use this momentum on offense going into Thursday.

“We are confident going into that game and this was a good wake-up call, so hopefully we can have a similar performance,” Esparza said.