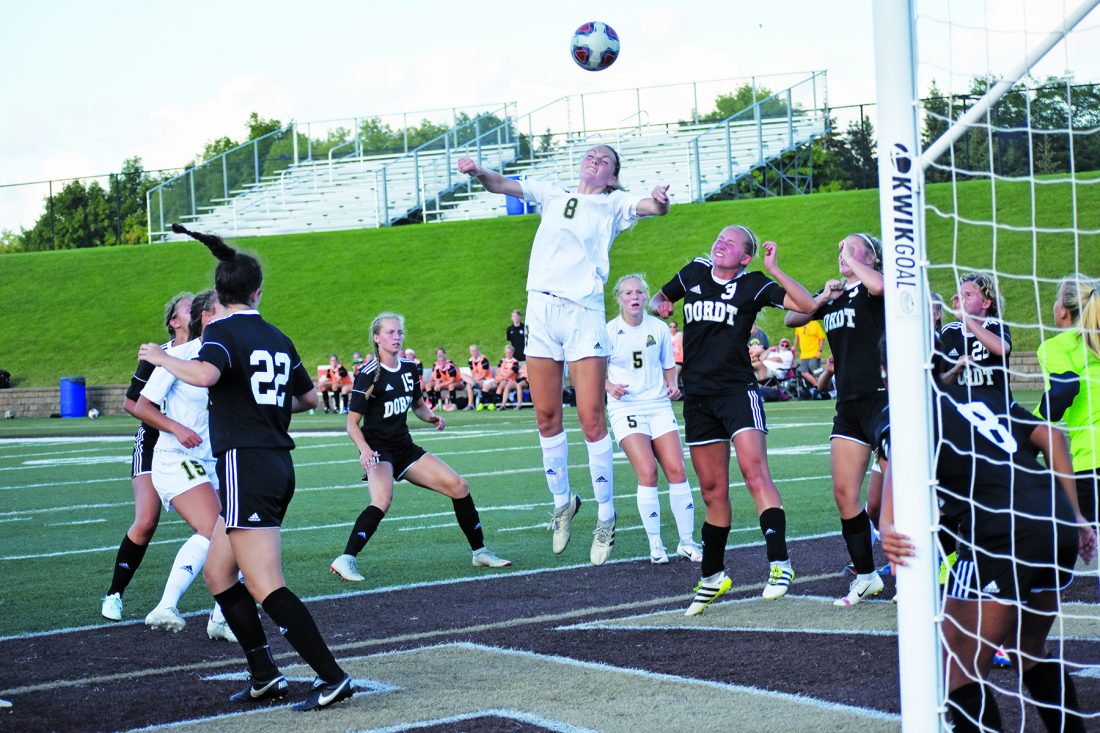 Photo by Sam Thiel SMSU’s Olivia Harriger goes up for a header on a corner kick during their exhibition game against Dordt University on Tuesday at Mattke Field.

MARSHALL – It was only their second time on the field this season, but the Southwest Minnesota State University soccer team didn’t seem to have much rust to shake off.

The Mustangs opened up the 2019 campaign with an offensive onslaught, highlighted by a pair of goals apiece from senior Alli Miskowiec and sophomore Abbey Hoisington en route to a 6-0 exhibition victory over Dordt University Tuesday evening at Mattke Field.

SMSU coach Erin Kasmarik-Mallett said they’ve already seen a lot of great things from their team in the two days that they’ve had under their belt and was pleased with the overall performance.

“I think it’s a great start; the second day of preseason we saw a lot of great things and have some really good ideas too as to where we’re going to go from here,” Kasmarik-Mallett said. “We’ve never been out this early for an exhibition game so we were going to see how it went but it was good.”

Once the Mustangs fired off a shot on goal just 15 seconds into the game, the SMSU offense was on the attack for the majority of the contest. Abbey Hoisington got the scoring started seven minutes into the first of three 30-minute periods before Alli Miskowiec found the back of the net with 3:58 left to quickly put the Mustangs up 2-0.

SMSU’s high-octane offense continued to capitalize on their side of the field in the second period, as the Mustangs earned a corner kick opportunity with roughly 22 minutes left in the frame. A well-placed kick found its way to the cleat of Olivia Harriger, who then strategically put it out of the reach of the Dordt goalkeeper to extend the lead to 3-0. An own goal by the Defenders then brought it to 4-0 after two periods.

The Mustangs weren’t done there, however, as Miskowiec opened up the third period with her second goal of the game just four minutes in before another score from Hoisington with 20 minutes left cemented the victory for SMSU.

Miskowiec said their key on offense was their ability to connect on their passes and take advantage in front of the net.

“I felt we were really able to connect with our give-and-gos and through balls and be able to finish at the net with the ball,” Miskowiec said.

Kasmarik-Mallett added they haven’t had much time to work on the offensive scheme but said being able to rely on their depth up front will be a big factor throughout the season.

“We were really pleased offensively, and to be honest, we really haven’t any time talking about it yet from that standpoint. I think the thing that’s most exciting is that we’re going to have a lot of players that when they get on the field, the other defenders are going to have a tough time,” Kasmarik-Mallett said. “That’s the exciting thing, it doesn’t really matter who’s face happens to be up there, we’re going to give some teams some serious questions that they’re going to have to answer defensively this year.”

For 12 SMSU players, Tuesday’s contest marked the first game of their collegiate careers. Taryn Sproul made an appearance in goal for the Mustangs, helping record a defensive shutout, while several other Mustangs made their impact on the field.

Kasmarik-Mallett said she was really pleased with the energy and play of their newcomers and felt they showed a lot of potential in their first minutes of action.

“I think the thing that was most impressive was they showed almost no fear and they were disappointed when they didn’t score or complete the pass,” Kasmarik-Mallett said. “I think that’s a great thing for us to be able to say ‘We’re going to play at a really high level’ and when we don’t play at a high level, even though it’s only the second day, we’re all about getting better. So that’s going to be a really important piece for us.”

SMSU will continue exhibition play on Sunday with a matchup against the College of St. Benedict at 4 p.m. in St. Joseph. Moving forward, Kasmarik-Mallett said their biggest takeaway is that they’ll be able to rely on a lot of depth this season and they’re going to take things one game at a time.

“I think we figured out that a lot of players are going to be able to help us this year, which is really great and it’s going to be awesome to have that kind of depth,” Kasmarik-Mallett said. “So we’re going to build from here and we know that the challenges coming next are going to be greater and we’re just going to continue to take those steps forward.”