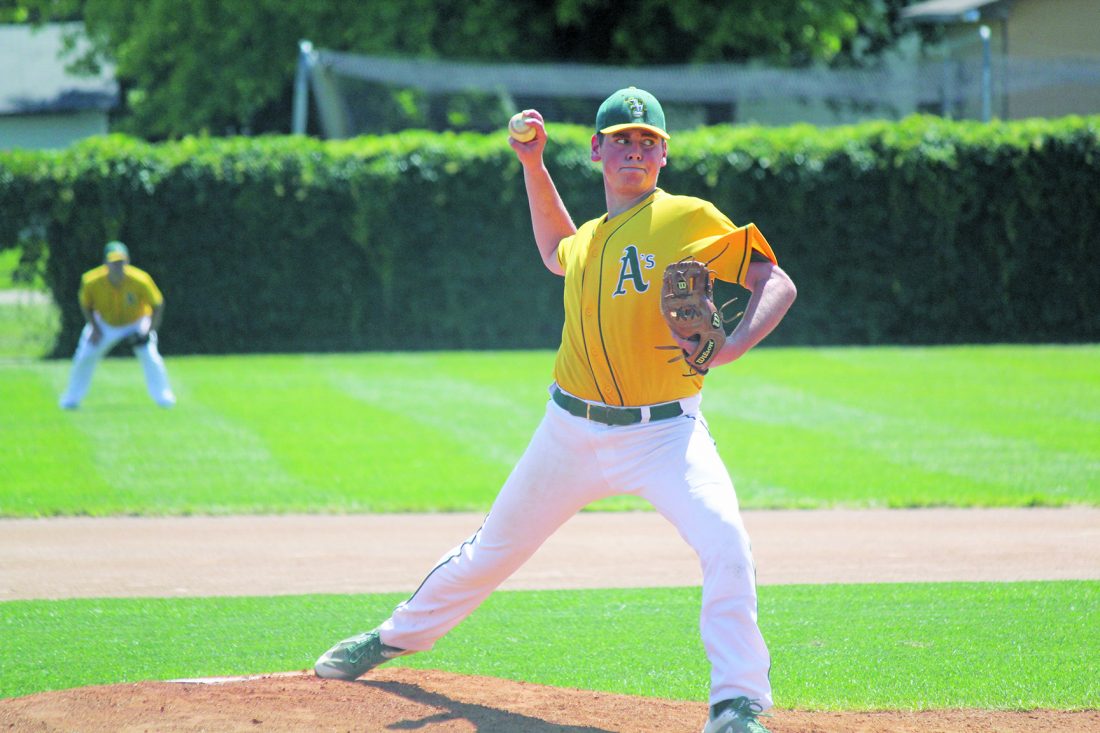 Photo by Jake Przytarski Marshall’s Logan Tomasek winds up a pitch during their Region 4C tournament game against Starbuck on Saturday. The A’s fell to Starbuck 9-4 to close their season.

SACRED HEART – Fresh off of a season-extending 6-1 win over Granite Falls on Friday, Marshall could not keep the magic alive in Saturday’s do-or-die Region 4C tournament matchup with Starbuck as the Stars scored early and often to beat the A’s 9-4.

Leading up to the contest, A’s manager Ryan Schwagel believed it would take control on the mound as well as at least five to six runs to make it past the high-powered Stars.

“We knew we had to come out throwing strikes right away. We didn’t throw enough and walked a few guys and had a couple of errors,” said Schwagel. “They hit the ball well and we just couldn’t make it up. We knew he was a good pitcher and we knew what we had to do, and we knew we had to score about five or six runs to have a chance and we put up a good fight. We just didn’t have enough gas left in the tank.”

The loss moves the A’s to a final record of 14-8 for the 2019 season. Schwagel admitted that the team ran into some obstacles late in the season but overall was pleased with how it all went down.

“I thought we played pretty good. We started 12-2, stumbled a little bit late, and seemed to run out of gas,” said Schwagel. “Otherwise we had one (heck) of a season compared to the last couple years and we’re on the right track.”

The A’s showed plenty of promise in their first two times up to the plate in Saturday’s matchup as the club got to Starbuck ace Austin Versteeg early with three runs coming across thanks to run-scoring hits by hits Alex Thompson, Ryan VanMoer and Jordan Kontz.

Unfortunately, the Stars were quick to respond in their first time up with four runs scored on three hits. Marshall starting pitcher Logan Tomasek ran into control issues early on with a pair of walks to open up the frame and provided the Stars with their first run on an RBI hit by pitch. A sacrifice fly and a pair of RBI singles drove in the teams three additional runs.

After giving up two more runs in the second inning and an extra-base hit to begin the third, Zach Olson stepped in as a reliever and remained on the hill for five innings before VanMoer took over to in the bottom of the eighth inning. Olson would finish the day giving up a pair of earned runs on five hits while VanMoer allowed no runs with one hit allowed.

With the Stars holding a commanding 9-3 lead late in the game, the A’s scored one final run in the top of the eighth inning when Zach Thompson led off with a walk and later scored on a sac-fly by Kontz to make it 9-4.

The Milroy Yankees were unable to keep their state tournament hopes alive on Sunday as a result of a back-and-forth 4-2 loss to Starbuck in the consolation bracket of the Region 4C tournament. The Yankees finished the tournament with a 2-2 record after notching their second win a day earlier against Norway Lake-Sunburg in a 9-1 final.

With the two-game split, the Yankees finished out the season with a 12-16 overall record.

Manager Ryan Rohlik admitted that the team faced some adversity this season and didn’t enjoy the level of success that the team has come to expect.

“It was kind of a unique year for us. A team that is used to a tradition and winning a lot and we really battled it this year,” said Rohlik. “Whether it be injuries, whether it be guys travelling from a distance away, but that’s no excuse. We have to know that we’re always going to have a target on our back because we are Milroy and we have to be ready to go out of the gate.”

Looking ahead to next year and beyond, Rohlik sees a lot to be excited for with new faces already making an impact on the club.

“We’ve got some young guys that are playing some pivotal roles and they’re only going to get better with all the experience that they got this year and I believe the ceiling is very high for us,” said Rohlik. “I think as a team we’re going to be pretty tough and (we’ll) use this as a motivational tool to work in the offseason and get ready for next year.”

The Yankees broke out the bats in their first game of the weekend against the Lakers with contributions coming from up-and-down the lineup, while starting pitcher Austin Deutz provided a shutdown performance on the hill en route to a 9-1 win.

According to Rohlik, the success at the plate came as a result of a change of approach after recognizing what the pitcher was trying to do on the mound.

“One time through the order we started recognizing what the pitcher was doing so guys changed their approach from their first at bat to their second at bat and that helped us,” said Rohlik. “(We) drove through the ball rather than just kind of lunging too far and trusting the hands so to see them do that and adjust mid-game was key for their success.”

The change was apparent in the third through fifth innings as the Yankees exploded for nine runs to take a commanding 9-1 lead. The most productive frame for Milroy came in the fifth when the club strung together six hits for seven runs, including a pair of run-scoring extra-base hits by Isaac Schmitt and Nathan Deutz.

Milroy starting pitcher Austin Deutz lasted six innings on the hill where he gave up only one earned run on three hits while striking out five. David Schmidt would take over for a pair of shutout innings before Ty Kemp took over in the ninth to close.

Rohlik was pleased by the work of all three pitchers in the win.

“I thought Austin was great right out of the gate,” said Rohlik. “It’s been awhile that we’ve not thrown him consistently every seven days and so it was good to see him come out, he was efficient. He only threw like 68 pitches (because) I just wanted to rest him in case we win tomorrow so you have him available even stronger for next week. I think that was big and then to see Dave come in and throw strikes was very good to see for the first time that he’s thrown for us. And then to have Ty wrap it up and get some guys some experience of what playoff baseball is about was always good to see too.”

The string of dynamic pitching performances for the Yankees continued in Game 2 with Nathan Deutz providing a strong seven-inning outing for the club where he limited Starbuck to only four runs. Unfortunately, the success at the plate did not carry over with it as Starbuck starting pitcher Collin Richards was able to keep Milroy’s offense off-balance for most of the contest, resulting in a 4-2 win for the Stars.

Deutz opened up the game with six-straight shutout frames that provided an opening for the Yankees to take a 1-0 lead in the top half of the sixth via an RBI base hit by Brian Dolan. The hit was the first three on the day for Dolan.

Starbuck’s first run of the game came later in the inning and was surrounded with a bit of controversy regarding whether their base runner tagged up before heading home to score. According to Rohlik, the team tried to turn things around after the call but were unable to swing the momentum back to their favor.

“This was a tough one. We lead 1-0. (I) feel like we had the right call with the runner leaving early but that’s baseball,” said Rohlik. “He felt he didn’t see it that way and we tried to turn it around tried to change things and try to get momentum in our way, but you have to give credit to their pitcher. He was making good pitches (with) good location and keeping us off-balance just enough and unfortunately it wasn’t our day today.”

After the call was made, the Stars went on to add two more runs in the frame with a single and a double to take a 3-1 lead. A single in the following inning extended the lead to 4-1 that stood until the top of the ninth.

Milroy did its best to mount a comeback in their final time up and scored a second run on an error in the field to score Greve, who previously reached with a double. The one run would be the extent of the damage done, however, as a groundout and a popout ended the game at 4-2.