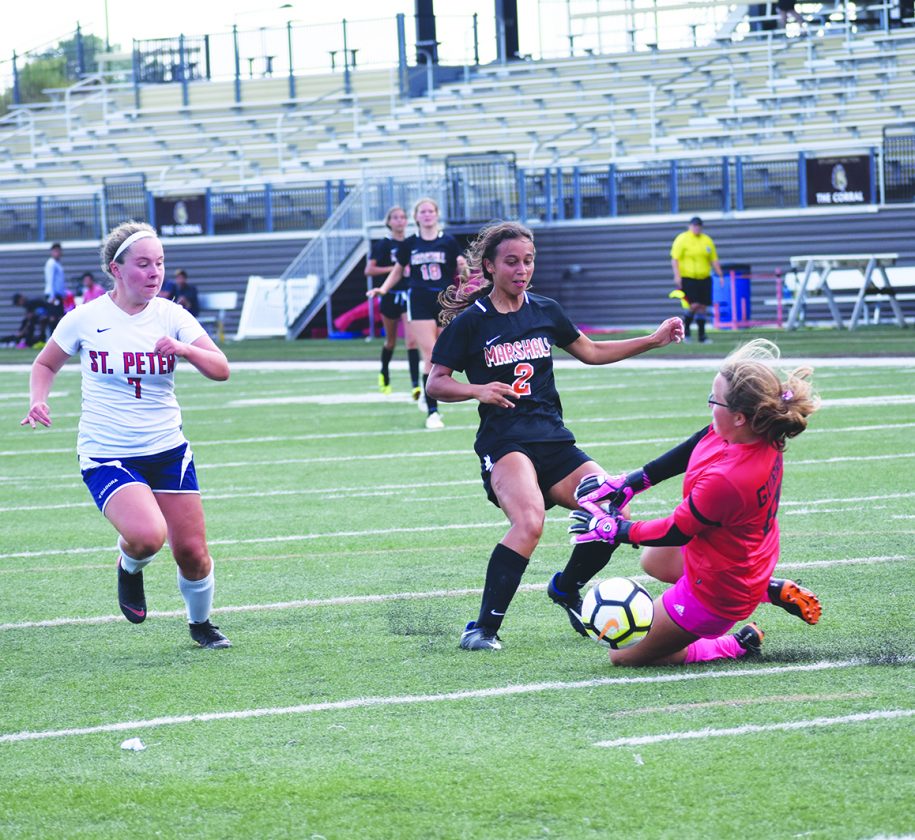 Photo by Sam Thiel Marshall’s Lenei Estrada kicks the ball past the St. Peter goalkeeper during their game on Friday. Estrada would score on the play, but the Tigers fell to the Saints 2-1.

MARSHALL – When the Marshall girls soccer team opened the season last year, they saw a strong St. Peter team roll to a 6-0 victory. With a year of experience under their belt, the Tigers came into this year’s opening matchup against the Saints ready to improve on that result.

Marshall did just that, cutting an early deficit with a late goal in the first half, but weren’t able to capitalize a second time as the Tigers fell 2-1 to the Saints on Friday at Mattke Field.

Despite the final outcome, Marshall coach Jesus Hernandez was proud of the improvement that his team showed within the last year, especially against a quality St. Peter squad.

“I think with it being our first game of the season, the girls were a little nervous and excited at the same time for the game and we had some unstable levels. We were playing hard at times and then started to slow down, maybe the girls were getting tired or our substitutions weren’t working the way we wanted to, but overall we gave St. Peter a good fight,” Hernandez said.

“They’re a really good team; our first game last year, they beat us 6-0, so going from that game to a 2-1 outcome I think is a really big improvement for our team. We see the girls’ mentality has grown and even though it’s not the outcome we wanted, I think it reflected a lot of the work that we’ve done at the beginning of the season.”

Right from the start, the Tigers were forced to stay on their side of the field for the majority of the first half, as the consistent pressure from the St. Peter offense was on display early on. The Saints were able to strike first with 26:12 left in the opening frame to take a quick 1-0 lead before adding a goal roughly 10 minutes later to make it 2-0.

Despite the quick deficit, the Tigers continued to attack the offensive zone, as Lenei Estrada found an open lane to the net and nearly put Marshall on the board with a shot that just went over the crossbar.

Minutes later, Estrada found herself with another breakaway opportunity and this time was able to beat the goalkeeper to the ball and fire it into the open net to get the Tigers on the scoreboard and cut the deficit to 2-1 with three minutes remaining in the first half.

Hernandez said one of their biggest weapons on offense is their speed at the forward position and credited that for keeping themselves in the game, but added there’s still some work with their passes they need to improve on in order to maximize their potential in the open field.

“I think our speed with Lenei and Dayna Estrada and some of the other forwards, they’re young but they have great speed and I think that’s one of the things we’ve really been working on taking advantage of,” Hernandez said. “We do struggle with the midfielders connecting the ball with our forwards sometimes, but a lot of our attacks rely on sending the ball through or over the defense and taking advantage of the speed that we have. We still need to make some progress with that though; we need to send the right ball to the person, a lot of times we’re burning out our forwards because they’re chasing the ball constantly, so as the season advances we’re hoping to connect more balls on the ground and send through balls to our forwards instead of 50/50 balls.”

After gaining some momentum to close the first half, the Tigers looked to continue that trend to start the final frame. Both sides had opportunities to find the back of the net in the first minutes of the half, but Marshall goalkeeper Leah Legatt made multiple key saves to keep the Saints off the board.

St. Peter then had a big opportunity to extend its lead with a little more than two minutes remaining when they earned a penalty kick, but Legatt once again came up with a huge save to maintain the one-goal deficit.

Hernandez said despite her youth, Legatt shows a lot of toughness and does a great job of staying aware of the game that’s unfolding in front of her in order to come away with some big-time saves.

“Despite being an eighth-grader, she’s very smart on the ball. We’ve always known this, she’s a great goalkeeper and she’s very strong and stays focused throughout the game when she’s in goal,” Hernandez said. “I think those types of saves come from being focused on the game and knowing what’s happening and reading the play and the game the way a goalkeeper is supposed to. A lot of times they stand there for a long period of time and then all of a sudden they get a shot on them and they’re not prepared, but she’s very good at staying focused and is very vocal and has a lot of confidence in herself. I think that’s what leads to all of those great saves, especially on that PK.”

Marshall would have a chance of its own to get the equalizer on a corner kick, but the play would be broken up by the Saints defense with a minute to go, and the Tigers came up just short in their first outing of the year.

The Tigers will return to action today when they take on Waseca at 10:30 a.m. Hernandez said their biggest takeaway will be to work on their ability to stay consistent throughout the entirety of the match and play their game from start to finish.

“Coach (Shayna) Smith and I agreed that we need to work on our consistency,” Hernandez said. “We start really strong and then slow down and feel the pressure before picking it up again, so if we can stay constant from the beginning to the end or get stronger towards the end and get the last push, that’s our biggest takeaway.”