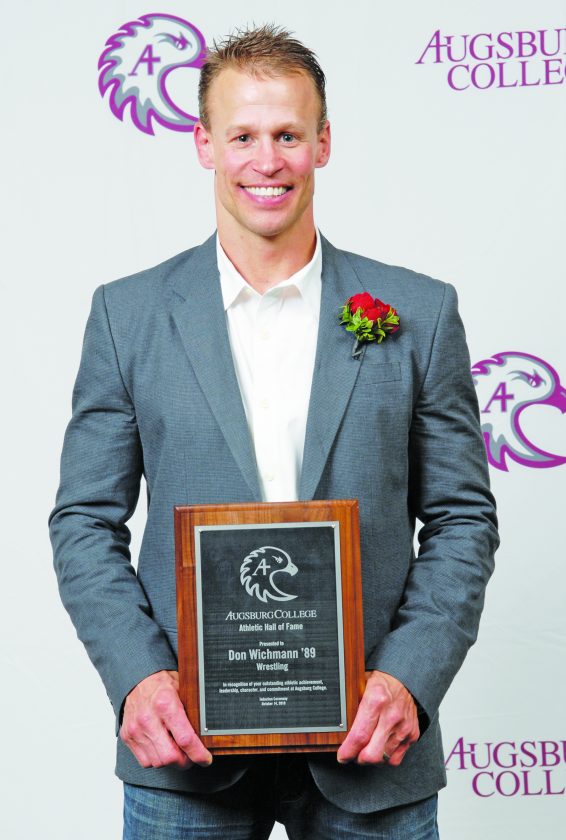 MINNEAPOLIS – Augsburg University men’s wrestling alumnus and Marshall native Donny Wichmann ’89, a three-time Minnesota Intercollegiate Athletic Conference champion, a national tournament All-American and a longtime assistant coach who was a part of 10 NCAA Division III national championship teams with the Auggies, will be inducted into the National Wrestling Coaches Association Division III Hall of Fame during a ceremony in August in Fort Lauderdale, Fla.

Wichmann served as an Augsburg men’s wrestling assistant coach for 19 seasons – 1989-2007 under head coach Jeff Swenson ’79, 2008-09 under head coach Mark Matzek ’05. Teams he coached won 10 NCAA Division III national titles, while finishing second seven times, third once and fourth once. The Auggies also won 13 MIAC tournament titles and 14 MIAC Team Duals titles during the span, and he was part of the coaching staff for 134 Division III All-Americans and 34 individual national champions. The Auggies were 248-30 in dual meets during his coaching tenure.

Considered one of the top middleweight wrestlers in Augsburg history, Wichmann won 137 matches in his Auggie career, claiming three MIAC individual titles – 1986 and 1987 at 142 pounds, and 1989 at 150 pounds – while earning MIAC Tournament Most Valuable Wrestler honors in both 1987 and 1989, and the most falls award in 1987. Wichmann earned All-American honors with a fourth-place finish at 150 pounds in the 1989 NCAA Division III National Championships.

A native of Marshall, Wichmann was named an Augsburg co-Honor Athlete in 1989, and was inducted into the Augsburg Athletic Hall of Fame in 2010. He earned his degree from Augsburg with a marketing and management major in 1989.

In 2015, Wichmann was diagnosed with glioblastoma, an aggressive form of brain cancer. Since his diagnosis, he has received an incredible amount of support from the Augsburg community and the wrestling community, not only in Minnesota, but across the country as well. In 2018, Wichmann was presented with the State Medal of Courage Award from the National Wrestling Hall of Fame – Minnesota Chapter during a ceremony in Austin.