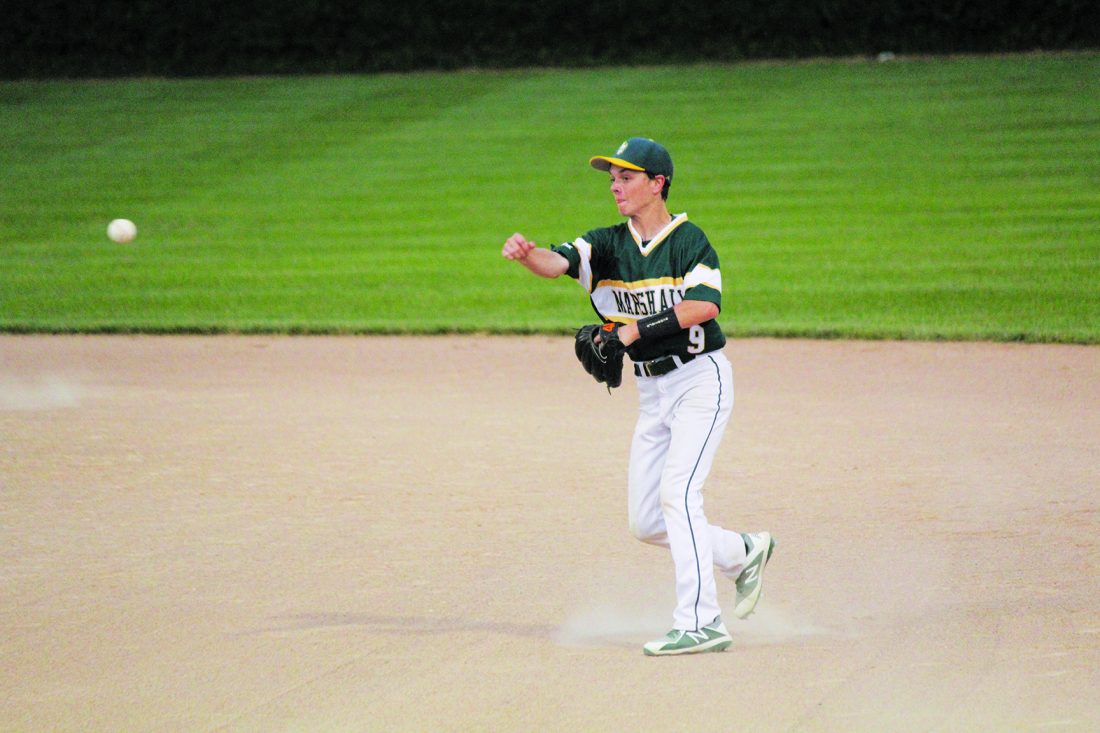 Photo by Jake Przytarski Marshall’s Dillon Loft throws to first base during their Region 4C tournament game against Granite Falls. The A’s defeated the Kilowatts 6-1.

SACRED HEART – The No. 3 seed Marshall A’s guaranteed themselves at least one more game to be played in the Region 4C tournament thanks to a 6-1 victory over No. 7 seed Granite Falls on Friday in Sacred Heart.

The A’s were able to jump out to an early lead in the contest and never looked back. According to manager Ryan Schwagel, the fast start was crucial in helping to turn the page on last week’s disappointing loss.

“It’s always nice playing with a lead. It seems like if we get one or two early it seems like we get up and it keeps our guys in the game,” said Schwagel.

Schwagel went on to praise starter Zach Olson for his complete-game performance on the hill for the A’s.

“Zach did a great job throwing strikes and keeping us in and working quick,” said Schwagel. “It was just a good overall team win.”

“It’s awfully hard to win when you have four errors, but Marshall got a couple hits early,” said Richter. “We just didn’t hit the ball well and we had a couple of opportunities. (We had) four errors, all were runs and it’s tough to win (that way). We just scattered singles around we could never get anything going. Tip your hat to Marshall the pitcher pitched well.”

Olson began his seven-hit gem with a pair of strikeouts in the first inning that helped provide an early spark for the club. Olson would finish the game with eight strikeouts en route to a winning performance on the mound.

The early spark translated to the batter’s box as Ryan VanMoer led off the game with a double and later scored on an error in the field. The run scored was the first of four in the game for the A’s that came as a result of a Granite Falls error. The lone run-scoring hit came off the bat of Schwagel in the bottom of the third to give the A’s a 2-0 lead.

The Kilowatts went on to cut the deficit in half in the top of the fifth when starting pitcher Christian Kanten and Colton Vien each delivered singles to end the team’s hitless drought before Brandon Grund drove in Vien with an RBI single.

The A’s would respond in the latter half of the inning with a three-run surge that began with a double by Olson followed by a single by Schwagel. A pair of errors in the field scored the three runs and gave Marshall a 5-1 lead.

Marshall’s final run of the game came in the bottom of the seventh after Schwagel got aboard with a walk and Alex Thompson followed suit with a single. Schwagel would later score on another Kilowatts error.

The loss for Granite Falls marks the end of their season. Richter praised his players for their dedication to the club all season long.

“I’m glad the guys that committed to play the game were here a lot of games,” said Richter. “It’s hard when we have a lot of guys from far away and it’s tough to get here all the time. I tip my hat to Adam (Brewers), he had surgery right before the season and came back and threw a lot of good innings for us.”

The victory for Marshall moves them into the next round where they will take on Starbuck today in Sacred Heart at 1:30 p.m.

Schwagel said the focus will be to keep doing what they did in Friday’s win.

“(We have to) just throw strikes and hit the ball,” said Schwagel. “We didn’t throw many strikes last game and tonight we threw great and we won a ballgame. That’s all it’s going to come down to. We’ll hit, we just have to throw strikes and play some defense.”