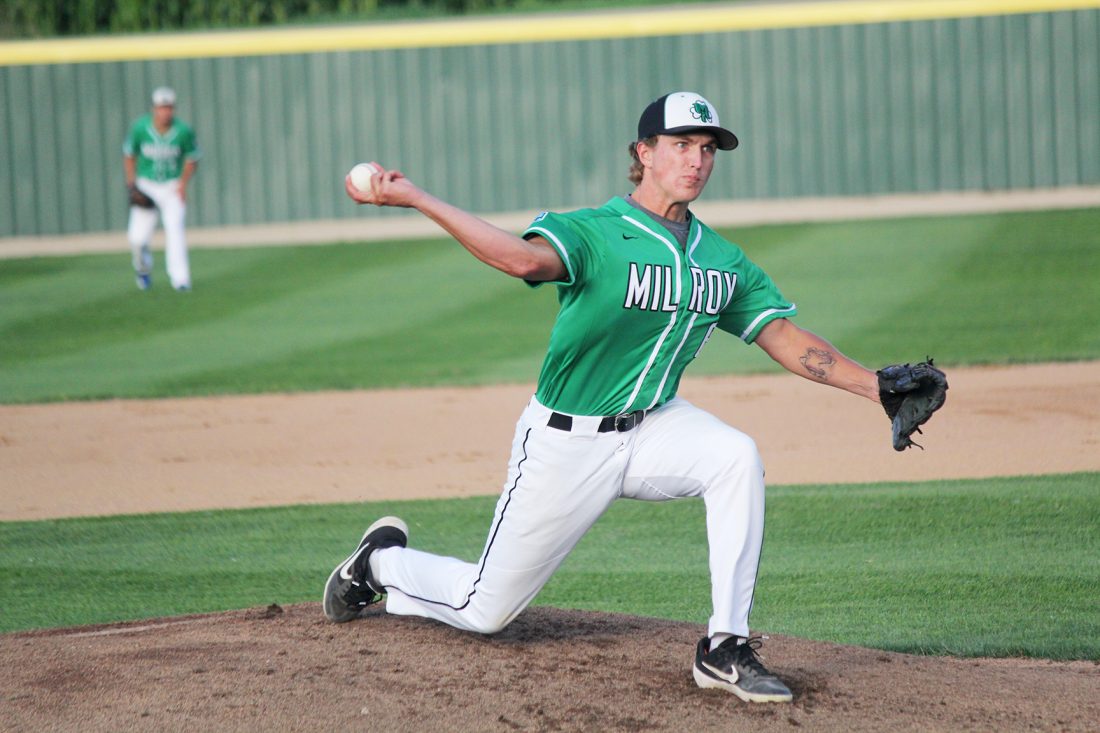 Photo by Jake Przytarski Milroy’s Kenny Morris delivers a pitch during their Region 13C tournament game against Fairmont on Wednesday. The Irish fell to the Martins 5-4 in Game 1 of their best of three series.

MILROY – The top-seeded Milroy Irish dropped a tightly-contested semifinals matchup with No. 4 seed Fairmont by a final score of 5-4 in the Region 13C tournament. Wednesday’s loss at Irish Yard gives the Martins a 1-0 lead in the best of three series.

The back-and-forth contest began with the Irish receiving an early boost at the plate in the bottom of the first inning when Brady Lanoue blasted a solo home run to the deepest part of Irish Yard to give Milroy a 1-0 lead. Lanoue would finish the game with a pair of hits including a leadoff double in the sixth.

The one-run lead lasted only a half inning as the Martins answered with a tying run in their next time up thanks to an error in the field by the Irish. Fairmont went on to add two more runs on a pair of base hits in the top of the third inning to take a 3-1 lead.

In the bottom of the fourth inning, Milroy’s power at the plate was showcased once more when Jake Plaetz and Derek Riley hit back-to-back doubles following a walk to Anthony Dolan that drove in a pair and knotted the game up at three apiece.

After four complete innings on the mound, a leadoff single by Fairmont chased Irish starter Kenny Morris from the game in place of Isaac Dolan. Morris finished the outing with three strikeouts to go along with five walks and six hits given up.

With the game still tied at four heading into the bottom of the sixth inning, Plaetz struck again with another extra-base hit to score Lanoue and give the Irish a 4-3 lead. The one-run advantage held until the top of the eighth inning when the Martins scored two runs that lifted the club to a 5-4 victory.

The Irish will look to tie up the series on Friday night in Fairmont at 7:30 p.m.