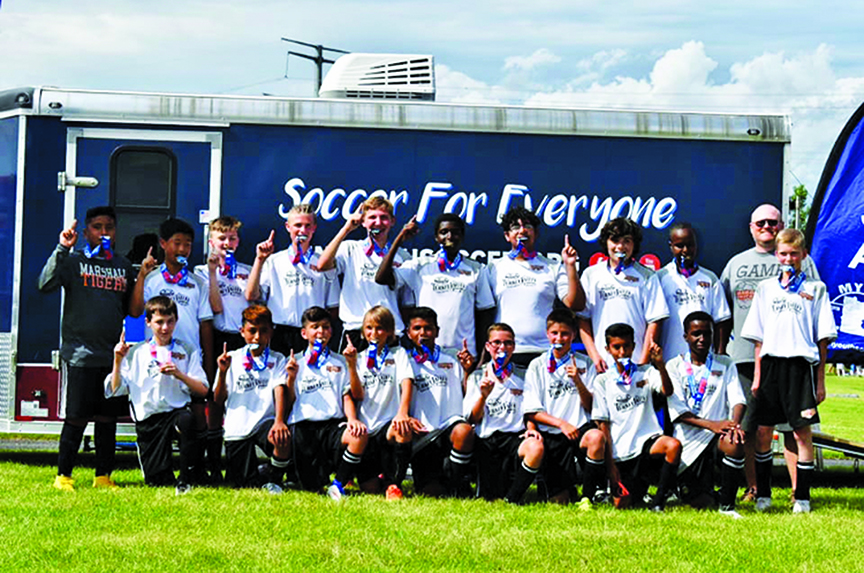 ROCHESTER – Three Marshall youth soccer programs recently wrapped up their seasons at the MN Youth Soccer Association C3 State Tournament. The Marshall 14U boys team took first place while the 12U boys and girls teams both tied for third.

The Marshall 14U boys soccer team put an exclamation point on their season with a state championship in a 1-0 decision over Austin. The tournament started on Friday in the extreme heat as the MUSA team faced the Chippewa Strikers. Ethan Hess got off to an early start for Marshall when he found the back of the net just two minutes into the match. Chippewa managed to even things out midway through the first half on a well-placed shot out of the reach of keeper Roberto Garcia. Jared Hernandez put Marshall back in the lead 10 minutes into the second half on a penalty kick which rounded out scoring for the match. MUSA gained 8 of 10 possible points in pool play putting them in fourth place in their group.

Day 2 started with weather delays, multiple schedule changes, and a tournament format change. The team needed a win, at least three goals and a shutout in the second round to improve their chances to make semifinals. With the quarterfinals cancelled due to weather, only a Top 2 group finish would do.

Marshall was scheduled to face a well-known district opponent in Worthington. From the opening kick MUSA took control of the match on the way to a 10-0 victory. Nine Marshall players (Hess (2), Hernandez, Jasiel Flores, Eduardo Reyes, Eli Boelter, Mohamed Sirat, Aidan Schuerman, Eli Pedersen and Alex Lim-Bjork) scored goals in the team effort which vaulted them into a first place group finish and a semifinal appearance.

On Sunday Marshall would face a team from Mississippi Valley Soccer Club that had only one loss on their season. Hess started the semifinal match in a hurry as he scored in the first two minutes. Hess scored again in the 20th minute giving the team some cushion. Manuel Alonzo Reynoso rounded out scoring in the 59th minute for Marshall. MVS managed to score in the 67th minute, but it was too little too late as MUSA would move on to the championship match with the 3-1 win.

Undefeated Austin would prove to be a challenge for Marshall in the championship match. Austin had not allowed a goal during their previous state tournament matches. The entirety of the match was a back and forth battle as each team pressured the other. Both teams fought through the exhaustion and each defense appeared to be up to the challenge. MUSA was awarded a corner kick in the 12th minute that Jared Hernandez found a way to direct into the back of the net which ended up being the winning goal.

The Marshall 12U boys team tied Wright County on Friday 0-0 in a game played in 105 degree heat index. Saturday was a complete washout as Rochester had heavy thunderstorms through the mid afternoon. On Sunday, Marshall beat North Suburban 6-3 to win their group and move on to the semifinals. Marshall then fell to Austin in the semifinal game 6-1 to finish their season.

The 12U girls team played Northfield on Friday and won 2-0. On Sunday, Marshall won against St. Anthony 1-0 and then fell in the semifinals to Cambridge for their first league loss of the season. Marshall finished with a 12-1 record.

Police: Man who died was trying to rob church worker