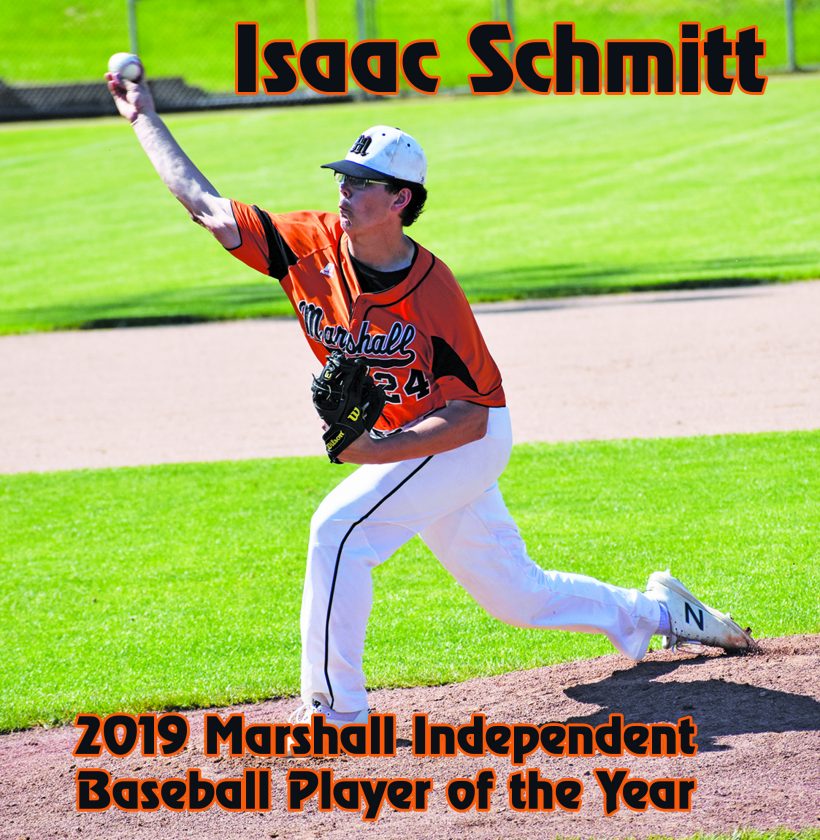 Photo illustration by Sam Thiel Isaac Schmitt has been named the 2019 Marshall Independent Baseball Player of the Year.

MARSHALL – When the lights are the brightest and the pressure is at its peak, there are those that avoid the challenge and a select few who embrace it. Marshall’s Isaac Schmitt falls into the latter category.

The senior ace of the Tiger staff was unflappable in some of Marshall’s most pivotal games during the 2019 season and provided the shutdown performances needed on the hill to push the club to its third state tournament in five years.

For his leadership on and off the field, as well as his outstanding work on the baseball diamond, Schmitt has been selected as the 2019 Marshall Independent Area Player of the Year.

“It means a lot from all the hard work I’ve put in from the coaches to my teammates. It’s a good award,” said Schmitt.

According to coach Chace Pollock the award is fitting given that Schmitt is not only a special player, but a special kid as well.

“Isaac is a special talent and he’s also a special kid. He loves baseball,” said Pollock. “He’s got a passion for baseball and he really was a leader of our team that made the state tournament this year.”

The trip to the state tournament this past season marked the second time in Schmitt’s career that he’s pitched on the big stage. The experience during his sophomore season was instrumental in building confidence for the rest of his career.

“He’s been a three-year starter for us on varsity and he’s seen a lot of baseball. Having him pitch in the state tournament his sophomore year really helped him grow and become better mentally,” said Pollock. “As I think back to this year the big part of our schedule was pitching him against Mankato East in the playoffs and having enough pitches for him to come back and start the second game against Hutch. For him to step up in that big situation (was huge) for us and he really gave us a lot of momentum going into the section championship games.”

Schmitt acknowledged that he was a lot more comfortable this time around.

“I think it was the extra year of experience at the varsity level from sophomore year. I felt more comfortable,” said Schmitt. “Going there my sophomore year I didn’t really earn much of it and didn’t have a big role. This year I had more of a role and I felt like I earned it more, so it was fun.”

The confidence was evident in Schmitt’s outing against Benilde-St. Maragret’s in the first round of the Class AAA state tournament in which he struck out nine Red Knights batters and gave up only a pair of runs. Prior to the state tournament game, Schmitt was lights out against the previously top-ranked Mankato East Cougars in sections where he shut them out in five innings pitched while giving up only a single hit.

Far from done, Schmitt next used his three-remaining innings of eligibility to keep Hutchinson off the board in game one of the section championship. The ability for Schmitt to remain dominant on the hill for such long stretches may not have been possible without the hard work put in during the offseason to drop weight.

“From the football season until the baseball season he dropped 35 pounds. So, he’s got himself into really good shape and you know there were times when he was younger where he would pitch later into games but get tired and you could really see fatigue setting in,” said Pollock. “This year, he got stronger as the games went on and you know we always joke together about making sure he’s in shape and he’s really stepped up and that was the difference in him especially on the mound.”

This season, Schmitt finished with an overall record of 7-4 on the bump and recorded a 2.908 ERA to go along with 75 strikeouts. At the plate, Schmitt ended the season with a .280 batting average and was second on the team in doubles and on-base percentage with five and .459 respectively.

Looking ahead to the fall, Schmitt plans to attend Minnesota West Community and Technical College to study to be an electrician. Though he won’t be playing baseball there, he will continue his career with the Milroy Yankees.

For those looking to follow in his footsteps with an illustrious career at Marshall, Schmitt’s advice is simple.

“Work hard,” he said. “Every second matters and don’t take any reps for granted.”

Reflecting on Schmitt’s impact in a Tigers uniform, Pollock said he’ll miss having the steady leader that Schmitt was throughout his career. One that teammates could always look to for a source of confidence.

“Isaac is the type of guy that everybody can look at and have confidence and a sense of calmness that he’s on our team. He’s one of those leaders you just kind of look at and you just know that he brings our group together and if we didn’t have him it would’ve been a different outcome,” said Pollock. “That’s what I’m going to miss next year is a guy that you can throw out there and have one of the best pitchers in the state on your team and a guy that everybody feels comfortable playing with. We’ll miss him, we’ll miss that part about him, but he’s left his legacy on Marshall baseball.”

Staff note: The Marshall Independent extends its deepest condolences to the Schmitt family after the passing of Isaac’s mother, Erica.