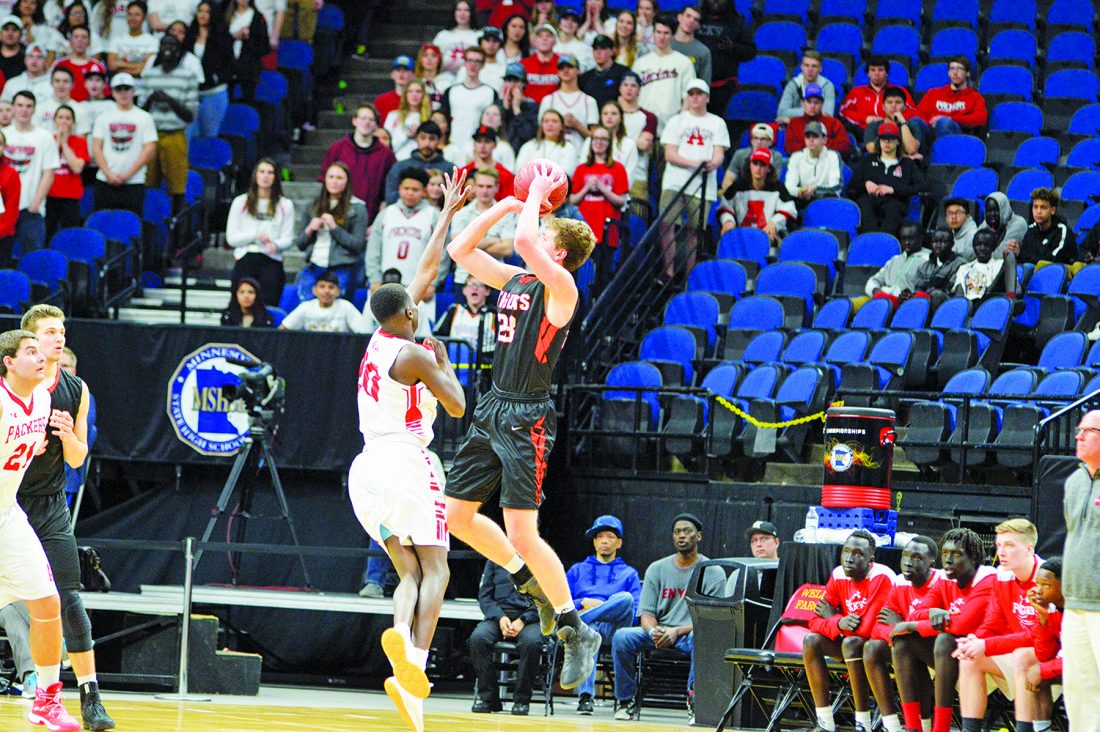 Independent file photo Marshall’s Mitch Sueker rises up for a jumper during a state tournament game against Austin on March 23, 2017. Sueker and Damani Hayes will represent South Dakota School of Mines on the “USA Sports Tours and Events” team that will play in Brazil later this month.

The team is made up of invited NCAA Division II basketball players from throughout the United States. Team members have been recognized at the national, regional and conference levels.

Ron Smith, Director of USA Sports Tours & Events said, “This is an outstanding group of basketball players that come from 10 different states and 12 different colleges and universities from across the United States. We feel that we have some of the ‘best of the best’ representing NCAA Div. II basketball from across the country. These players have been high achievers both on the court and in the classroom. They represent everything good that the Div. II institutions have to offer.”

The USA D-2 basketball teams will play their first games July 24 in the city of Sorocaba; and their second set of games on July 25th in the city of Jundiai against U-22 Club Teams. Both cities are in the state of Sao Paulo, Brazil.

On July 26, the teams will fly to Rio de Janeiro where they will have time on Copacabana Beach and tour the world famous Christ the Redeemer Statue and Sugar Loaf Mountain. The teams will play on July 27 and July 29 in Rio de Janeiro at the Botafogo Clube and Fluminense Clube. The team will return to the USA on July 31.

“This is an honor for both Mitch and Damani and an experience of a lifetime,” said Hardrocker men’s basketball head coach Eric Glenn. “It’s always nice when you can get a player selected to an elite group – and having two players on this prestigious roster is just extraordinary. I want to thank Ron Smith and USA Sports Tours & Events for giving our athletes this great opportunity.”

Sueker finished the 2018-19 season as the Rocky Mountain Athletic Conference Freshman of the Year and earned a spot on the All-RMAC Second Team. The 6-foot-9-inch forward from Marshall tallied 411 points on the season to average 14.7 per game. He ranked 14th in scoring in the RMAC and had a field goal percentage of nearly 50 percent – which ranked him ninth in conference overall standings.

The Electrical Engineering major also notched 33 three-pointers on the season, hauled in 146 rebounds to averaging 5.2 per game and ranked 15th in the RMAC with defensive rebounds (119). He was also credited with 17 blocks and 46 assists this year. Sueker led the Hardrockers in scoring, cashing in for double-digits in his final 10 games. He had a career high 32 markers against Chadron State in early February which earned him an RMAC Offensive Player of the Week recognition.

“I am really excited to be able to travel and experience new cultures and meet new people while being able to do my favorite thing – basketball,” Sueker said. “It will also be awesome being able to share this experience with one of my best friends and teammates — Damani. We are both looking forward to representing South Dakota School of Mines and USA basketball in Brazil.”

Hayes, 6-5 Industrial Engineering major from Mankato, Minnesota, had an excellent first year as a guard for the SD Mines men’s basketball team. He finished the year with 268 points and averaged 8.9 ppg. He came also averaged 6.3 rpg, tallied 46 assists, 29 steals and eight blocks. He notched a season-high 16 points on Feb. 8 on the road against New Mexico Highlands.

“I am very humbled to receive an invite to play with a great group of players,” Hayes said. “It is an amazing opportunity to see another part of the world as well as playing against some of the world’s best talent. I’m excited to represent SDSMT and the USA.”

While in Brazil the teams will experience educational, cultural and social aspects of Brazilian life through city, school and sports club visits. They will be conducting a youth clinic while in the city of Jundiai.

While in Rio the team will be staying on the world famous Copacabana Beach and touring the Christ the Redeemer Statue, Sugar Loaf Mountain, two of the most recognizable landmarks in the world, plus Ipanema Beach, the International Market (Ipanema) and the Lapa Steps.

South Dakota School of Mines and