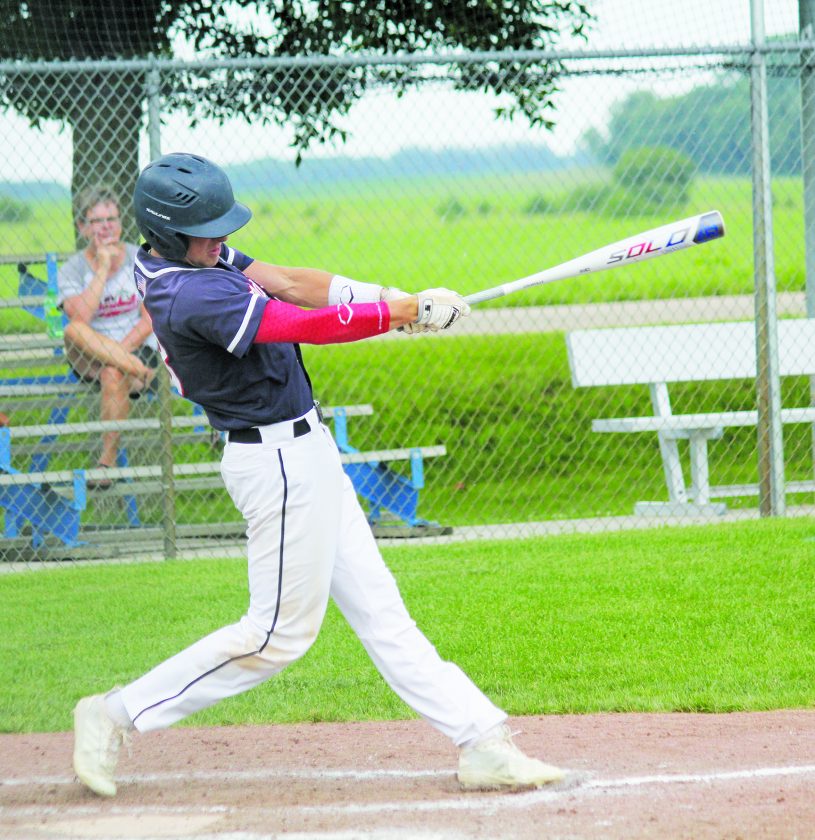 Photo by Jake Przytarski Marshall’s Peyton Grant follows through on a swing during their game against Brandon Valley (S.D.) on Friday. The Mudcats fell to the Lynx 6-1.

ESSIG – A one-run advantage through four and a half innings was not enough for the Marshall Legion baseball team to fend off Brandon Valley (S.D.) on Friday as the Lynx used a five-run sixth inning to defeat the Mudcats 6-1 in the first game of the Upper Midwest Classic tournament.

Though the result wasn’t the one they had hoped for, Marshall coach Mitch Maxwell came away proud of the way his team competed after having nearly a two week-long layoff due to weather.

“I thought we did a good job of competing. We had a few weather events that made so that we didn’t play for about 12 days so we’ve been off for almost two weeks,” said Maxwell. “We had some opportunities early against a good pitcher to put some runs on the board (but) we weren’t able to do that. We didn’t do what we needed to late but I liked the way that our team competed.”

In the top of the first, Marshall’s leading hitter Matt Hmielewski picked up his first of two hits with a leadoff double and later advanced to third on a fielder’s choice out by pitcher Isaac Schmitt. After a pair of strikeouts to follow, Hmielewski was left stranded to close out the inning.

On the hill, Schmitt was lights-out in the bottom half of the inning and continued to keep the Lynx hitters off-balance throughout the contest. The Mudcat ace would remain on the mound all the way into the sixth inning picking up five strikeouts before Logan Terfehr stepped in to close out the game.

Maxwell was impressed by Schmitt’s ability to establish the fastball early and later keep the Lynx hitters off-balance with off-speed pitches.

“He had a couple of great offspeed pitches and he had some velocity on his fastball,” said Maxwell. “He did a great job early of establishing the fastball and then as he progressed he did enough with his offspeed pitch to keep them off balance. But that’s Schmitty, he loves to compete when you have a team like that that he’s seeing. He matches their tempo and he’s going to match their performance and I think you saw that from him today.”

With Brandon Valley’s starting pitcher Dylan Kirkeby equal to the task, the two teams remained scoreless heading into the fifth inning before both teams were able to get one across. The lone run for Marshall came as a result of a pair of fielding errors by the Lynx followed by a fortuitous RBI-bunt by Hmielewski that hugged the first-base line but stayed fair to score Riley Alcorn.

After tying the score at one apiece in the fifth, the Lynx put together their best frame at the plate in the sixth inning beginning with a leadoff triple followed by a single to drive in their second run. A strikeout followed by a pair of walks prompted Marshall to make a pitching change with Terfehr taking over on the mound.

The next Brandon Valley batter drove a ball to deep right field that was caught by Jackson Hughes, but allowed the Lynx runner to tag up and score the third run. After the next batter walked to load the bases, another triple for cleared the bases to make it 6-1.

With the loss, the Mudcats move to 4-1 on the season. The group will look to rebound today with a matchup against Mankato Americans at Mueller Field in New Ulm at 10 a.m. The second matchup of the day is still to be determined.