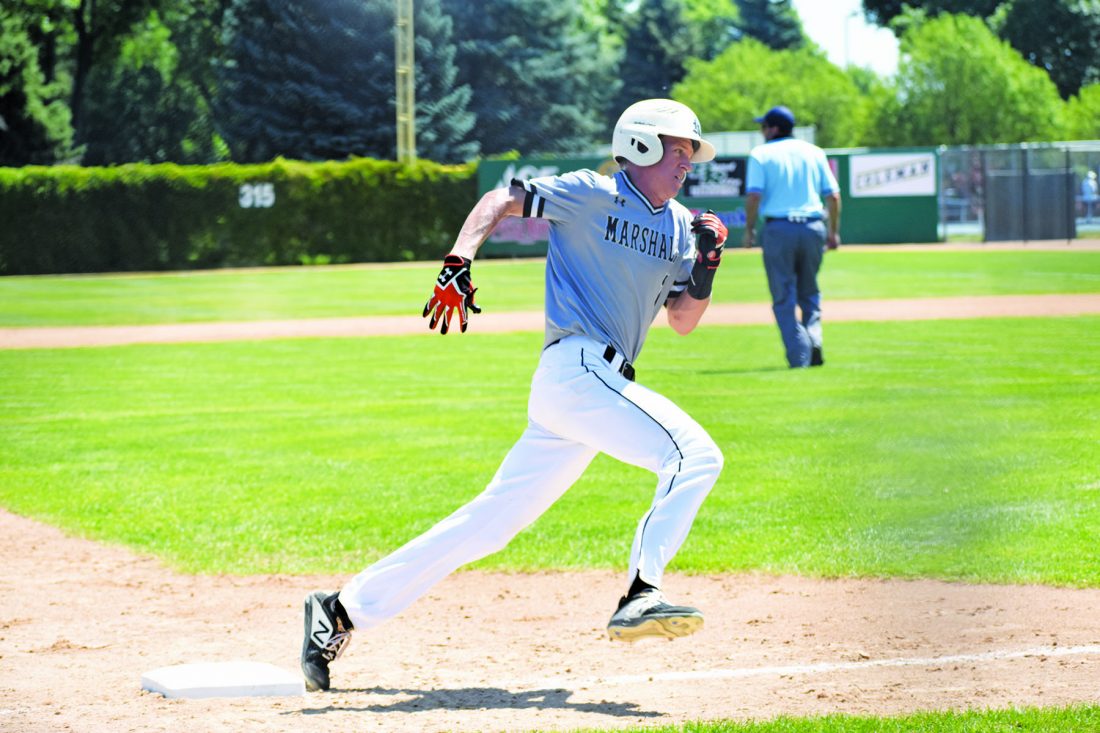 MARSHALL – The Marshall Black Junior Legion Baseball team knows the value of getting out to a good start. In their past 10 games, Marshall Black has scored first six times as well as in the first two innings seven times, all resulting in victories.

Friday afternoon’s sub-state opener was no different, as top-seeded Marshall Black broke out the bats for seven runs in the first two innings en route to a 7-2 victory over the fifth-seeded Alexandria Red at Legion Field.

“We came out of the gate really well; seven runs in the first two innings and that kind of set the tone for the rest of the day,” Marshall coach Chace Pollock said. “I was really proud of the way we broke out early.”

After Alexandria Red scored on an RBI double in the opening half of the first, Marshall Black answered right back in the bottom of the frame. Chase Douglas was hit by a pitch and Charlie Jacobson and Cole Felcyn reached on errors to load the bases with one out before Braden Meyer cleared the basepaths with a double to left to give Marshall Black a 3-1 lead.

Marshall’s offense wasn’t done there, however, as AJ Toulouse led off the second with a single before advancing on a wild pitch. After Jacob Hughes reached on a bunt single, Chase Douglas connected on an RBI single to make it 4-1. The next three batters would also bring in runs, with Spencer Wambeke reaching on an error, Jacobson getting an RBI groundout and Cole Felcyn hitting a sacrifice fly to extend Marshall’s advantage to 7-1 after two innings.

Offensively, Meyer led the way for Marshall with a hit and three RBI while Douglas and Wambeke each added a hit and an RBI and Jacobson and Felcyn recorded an RBI apiece.

Marshall’s quick start was more than enough run support for starter Jack Bly, who cruised in his outing. The righthander settled into a groove in the middle innings, tossing four straight scoreless frames and recording at least one strikeout in each one. Alexandria Red would later add a run in the top of the sixth on another RBI double, but Bly got out of the frame on a double play before escaping a pair of base hits in the seventh to cement the win.

Bly capped off his complete-game victory by allowing just two runs on six hits and striking out seven. Pollock said Bly did a good job of getting ahead in the count early (17 first-pitch strikes) and was able to mix his pitches well throughout the afternoon.

“He got ahead with first-pitch strikes a lot,” Pollock said. “His fastball was working well and he had a good mix; he’s starting to throw his curveball more and he’s starting to develop his off-speed more as well as his changeup, so I’m proud of the way he threw.”

Marshall (23-5-1) will face No. 2 New Ulm Gold today at noon. Pollock said their biggest takeaway is to execute on the basepaths a little more smoothly and think about situations on offense before they unfold.

“We could run the bases a little bit better. I thought we ran them better than Alexandria did, but we can be flawless out there and that’s what we expect is to be perfect all the way around,” Pollock said. “There’s some baserunning things, just thinking a pitch or a play ahead and being able to react when it happens.”