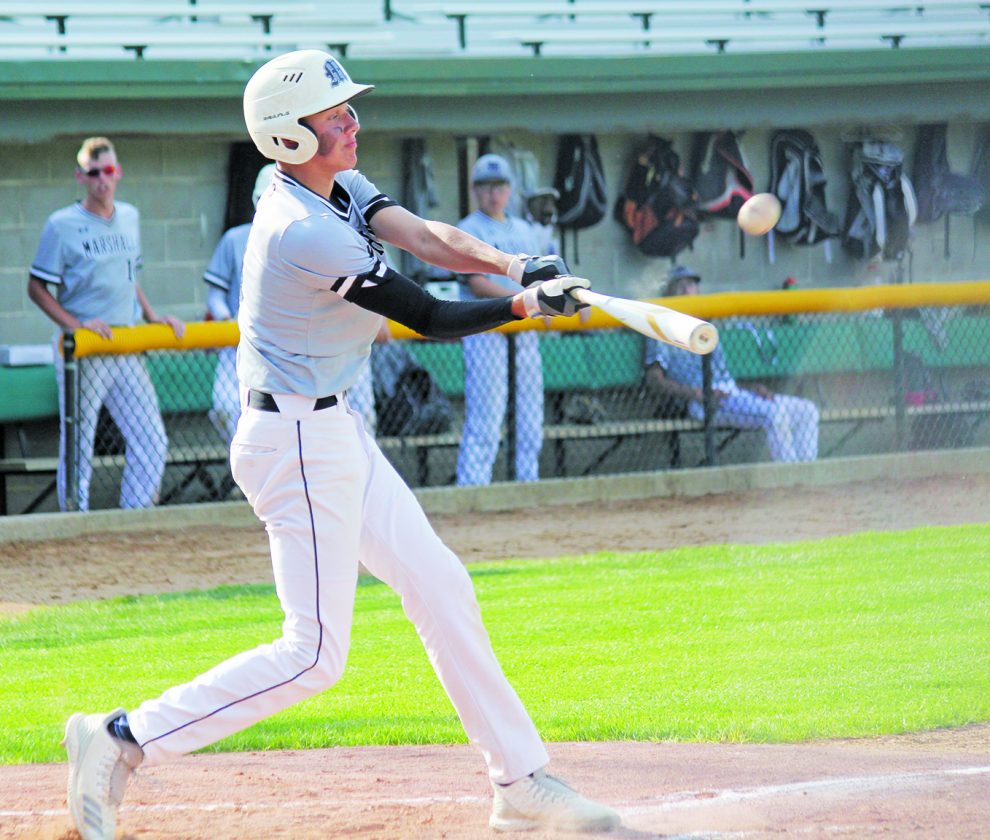 Photo by Jake Przytarski Marshall’s Josh Baker connects on a swing during their game against Slayton on Monday. Marshall Black defeated Slayton 18-0 in five innings.

MARSHALL - Fresh off a 2-1-1 finish at the Alexandria tournament this past weekend, the Marshall Junior Legion Black baseball team kept its foot on the gas in Monday’s home matchup with Slayton by defeating the Rebels 18-0 in five innings.

Marshall assistant coach Tyler Vaughn said the focus for Monday’s game was to get players some at-bats after the long weekend and have some of the non-starters take the field.

Slayton Coach Nate Wieneke says he expected it to be a challenge for his young team but was happy with the way they competed.

In the top of the first inning, the Rebels generated their only hit of the game with a leadoff single by Derek Kluis. For the rest of the contest, the Slayton hitters were kept off-balance by Marshall starting pitcher Jaden Pearcy, who finished the game with 10 strikeouts and no walks.

Vaughn says Pearcy’s outing was his best of the season so far.

“Jaden probably looked the best that we’ve seen him all year. He was throwing a lot harder than we’ve seen him and he was filling up the zone,” said Vaughn. “He didn’t have a single walk and his strike percentage was very high so I was actually pretty pleased with Jaden.”

The dominance on the mound carried over to the plate for Marshall with five runs coming across in the bottom of the first on three walks, an RBI single by Benson Kuecker and an RBI triple by Charlie Jacobson. Jacobson’s extra-base hit was the first of six on the day for the team.

The bats remained hot in their next time up with a seven-run burst lifting Marshall to a 12-0 lead after two. RBI leaders Brock Schultz and Josh Baker each drove in two in the inning, while Chase Douglas and Spencer Wambeke kept the rally going with a pair of RBI singles.

After a scoreless third inning, Marshall exploded for six more runs on seven hits in the fourth. A.J. Toulouse, Spencer Wambeke and Jacobson got the inning started with three consecutive singles before a double by Cole Felcyn drove in Toulouse and Wambeke. Baker and Schultz each chipped in a run-scoring hit and later scored on a fielder’s choice out by Pearcy and another hit by Toulouse to bring it to the 18-0 final.

With the win, Marshall Black moves to 15-5-1 on the season. The team will be back at Legion Field on Thursday for a doubleheader with Brookings (S.D.) beginning at 5:30 p.m. Vaughn expects the matchup to be a tough test.

“We got a doubleheader coming up against Brookings (S.D.) on Thursday and I think that’s going to be a tough one for these guys,” said Vaughn. “(It’s) a good South Dakota team coming in to play us so I think we’re going to have two good days of practice and come ready to play on Thursday.”

Slayton junior legion will return to the field on Thursday for a doubleheader with Adrian. Wieneke hopes to see better control on the mound along with more production at the plate.

“Well we have a doubleheader against Adrian so pitching (will be a point of emphasis),” said Wieneke. “We try to save a little bit of our pitching for Thursday so hopefully our pitchers throw strikes and we hit the ball around a little bit better than we did today.”