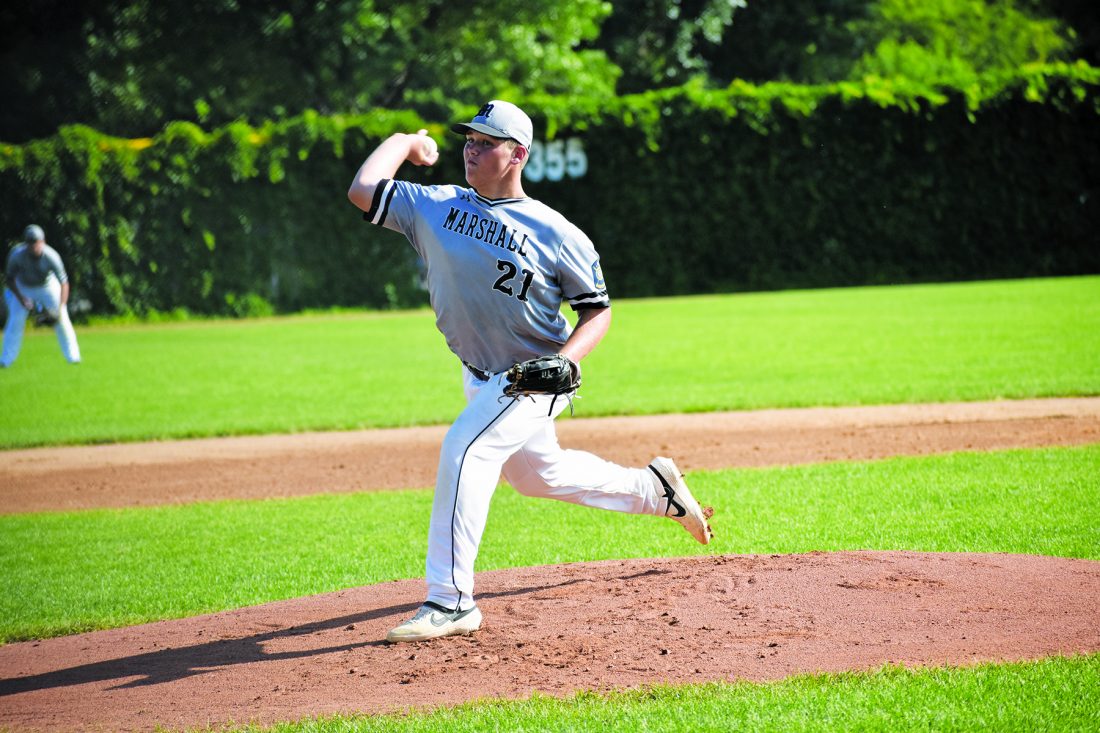 Photo by Sam Thiel Marshall’s Cole Felcyn fires a pitch during their game against Elk River on Sunday.

MARSHALL – After struggling to capitalize on the offensive end on Friday, the Marshall Black junior legion baseball team quickly showed their ability to bounce back and did so in a big way, as they defeated Alexandria and Fargo by scores of 9-1 in five innings on Saturday before closing the weekend with a 10-2 victory over Elk River in five innings to take third place in their home tournament.

Over the weekend, Marshall combined for 28 runs and 26 hits. Marshall coach Chace Pollock said he was pleased with his team’s response at the plate to produce strong numbers to close out the tournament.

“On Friday, we just couldn’t string them together. We had some hits, but nothing was next to each other and that happens sometimes,” Pollock said. “The next three games we’ve proved what we got, we were able to eight-run the next three opponents and we really swung the bat well against three good teams.”

Thanks to a pair of victories on Saturday, Marshall found itself in the third-place game against Elk River on Sunday morning.

Elk River would jump out to an early lead, using an RBI groundout and an RBI single to take a 2-0 advantage in the first inning. Marshall wasted little time in responding, though, as Jack Bly and Josh Baker connected on singles and Jacob Hughes reached on an error to load the bases before AJ Toulouse also reached on an error to bring in a pair of runs to tie things up at 2-2. Marshall then added runs on an RBI groundout from Chase Douglas and an RBI single from Spencer Wambeke to take a 4-2 lead.

Marshall added to its advantage in the next inning, putting together another strong offensive frame. Cole Felcyn and Bly led things off with back-to-back singles before Baker loaded the bases with an infield single. One batter later, Hughes stepped up and smacked a ball to center that resulted in a bases-clearing triple and three more runs on the board for Marshall. Toulouse would bring in another run on a sacrifice fly before Wambeke made it 9-2 on an RBI infield single.

Marshall would later add a run in the fourth on a fielder’s choice from Braden Meyer to bring it to the 10-2 final.

Wambeke led the way for Marshall with a 2 for 2 day at the plate with two RBI while Felcyn, Bly and Baker all added two hits and Hughes and Toulouse collected three RBI apiece.

Felcyn earned the victory on the mound, going five innings while allowing two runs on four hits and striking out two.

Marshall Black opened its weekend play with a pair of games, beginning with a morning matchup against Alexandria.

Marshall got out to a solid start, as Spencer Wambeke drew a walk before coming around to score on an RBI double from Charlie Jacobson to take a 1-0 lead in the first before a sacrifice fly from Jacobson in the third brought in another run to make it 2-0 after three.

The fifth inning for Alexandria was when things started to heat up for them, with an RBI that brought in their first run of the day to cut the deficit to 2-1, but Marshall quickly responded in the bottom half of the inning by plating seven runs.

Chase Douglas led things off with a single before Jacobson reached on an error to bring in a run. Marshall didn’t stop there, though, getting a two-run single from Jack Bly and an RBI single from Josh Baker to make it 6-1 before three consecutive walks with the bases loaded brought it to the 9-1 final in five innings.

Jack Bly led the way for Marshall with a 2 for 3 day at the plate with two RBI while Baker and Douglas each added a pair of hits and an RBI and Jacobson had a hit and two RBI.

Jacobson also earned the victory on the mound, going five innings while allowing one run on four hits and striking out two.

Marshall then would square off against Fargo later in the day, and just like they did against Alexandria, started off on the right foot on the offensive end. Douglas, Wambeke and Jacobson all reached on singles to load the bases before a single from Bly brought in a pair of runs to make it 2-0 after one inning.

After a scoresless second, Marshall continued to break out the bats in the third, this time capitalizing on two-out hitting. Felcyn, Bly and Braden Meyer would connect on singles to load the bases again before Baker reached on an error to make it 3-0. On the ensuing at-bat, Jacob Hughes cleared the bases on a single before coming around to score on an error to extend Marshall’s lead to 7-0 before Wambeke brought in two more runs on a single.

Fargo would get on the scoreboard in the top of the fifth on an RBI single, but a groundout would quickly halt their comeback attempts and cap off the doubleheader victories for Marshall.

Wambeke and Bly led the way for Marshall with a pair of hits and two RBI each while Hughes added a hit and three RBI.

Bly earned the victory on the mound, going five innings while allowing one run on five hits and striking out seven.

Marshall (12-4) will compete in the Alexandria tournament this weekend. Pollock said their biggest takeaway will be continuing grow on offense and see where it takes them.