Championship gets suspended by rain, will finish today 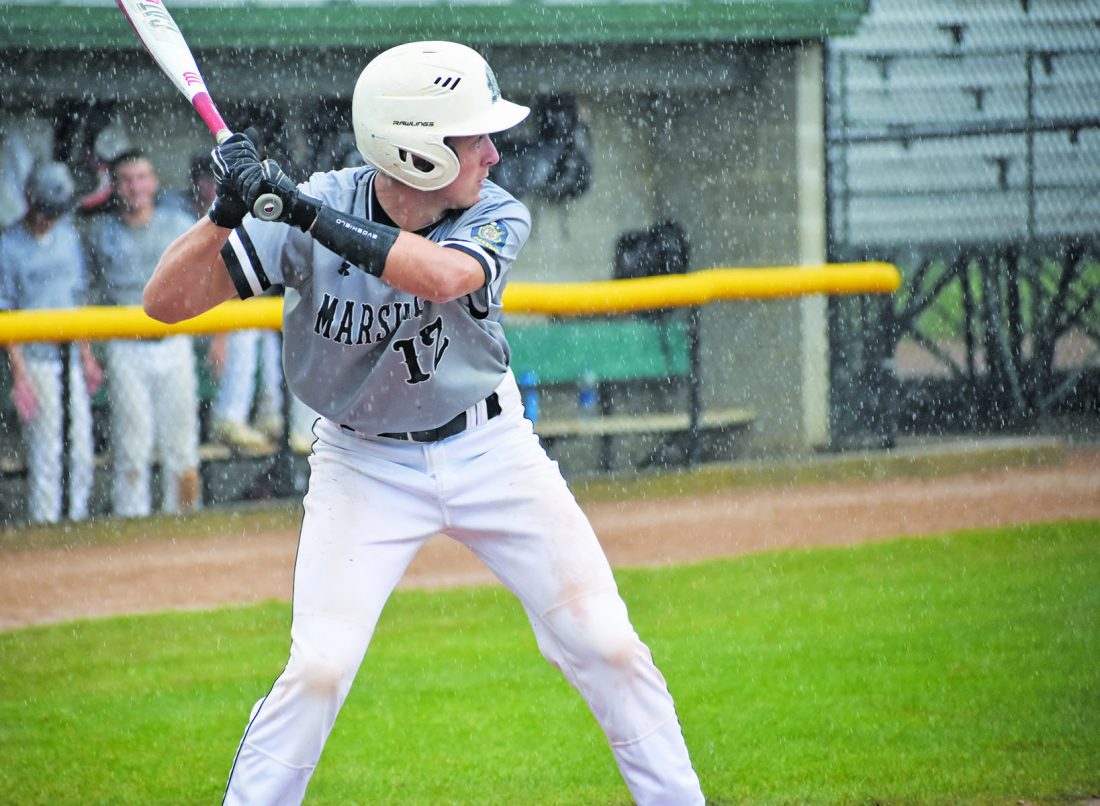 Photo by Sam Thiel Marshall’s Jacob Hughes awaits a pitch during their sub-state tournament game against New Ulm Gold on Sunday. Marshall Black and New Ulm will resume their championship game today after play was suspended after 2 and 1/2 innings.

MARSHALL – After opening their sub-state tournament with a victory on Friday, the Marshall Black Junior Legion baseball team was able to bounce back from an early loss to New Ulm Gold with a resilient victory over Alexandria Black on Saturday to set up a rematch with New Ulm.

Sunday’s championship saw a back-and-forth start between the two teams, but they will have to wait a little while to see the conclusion.

After getting through a rain-filled 2 and 1/2 innings, a small delay was announced. As fans and both teams waited things out, the rain only intensified, and play would be suspended at a 3-3 tie going into the bottom of the third inning.

New Ulm was able to get out to a quick lead, striking for three runs in bottom of the first to take a 3-0 advantage. Marshall wouldn’t let the deficit last long, however, as AJ Toulouse led off the second with a single before Josh Baker reached on an error and Jaden Pearcy drew a walk to load the bases with no outs. Marshall then got on the board on a Chase Douglas walk before Spencer Wambeke reached on a fielder’s choice to bring in a run and another run would score on an ensuing error to tie things up at 3-3.

Marshall would have another opportunity to add to the scoring in the next inning, as Toulouse connected on a one-out double before Baker and Jacob Hughes drew walks to load the bases, but they weren’t able to capitalize as New Ulm got a flyout to get out of the jam and keep things deadlocked.

Play will resume today at 5 p.m. at Legion Field.

Fresh off a hot start Friday, Marshall entered Saturday’s semifinal against New Ulm Gold in search of a similar outcome. Unfortunately for Marshall, it was New Ulm who got out of the gates quickly, taking advantage of a second inning that saw seven walks and four run-scoring hits to produce nine runs and put Marshall in an early deficit.

New Ulm would later add a pair of runs in the third and one in the top of the fifth to extend its lead to 12-0, but Marshall wouldn’t go down without a fight, though. After Douglas reached on an error and Wambeke drew a walk, Cole Felcyn would step up and connect on a double in right center to bring in a pair of runs and cut the deficit to 12-2. Unfortunately for Marshall, that would be the closest they got, as New Ulm got a strikeout on the next at-bat to stop any comeback hopes.

Felcyn led the way for Marshall with a hit and two RBI while Jack Bly, Toulouse and Braden Meyer each added a hit.

Charlie Jacobson took the loss for Marshall, going 1 2/3 innings while allowing eight runs on five hits and striking out three.

Looking to keep its season alive, Marshall gained an early lead against Alexandria Black when Wambeke connected on a single before a fielder’s choice from Felcyn brought in a run in the first inning. Marshall added to its lead a couple of innings later, as Meyer got an RBI single to make it 2-0.

Marshall wasn’t done there, with Pearcy and Douglas lining back-to-back RBI singles before Jacobson, Felcyn and Meyer also brought in a trio of runs to extend their lead to 7-0.

After a scoreless fifth, Alexandria Black would get on the board thanks to an error and a fielder’s choice, but Marshall didn’t them draw any closer, shutting down Alexandria the rest of the way to set up the championship matchup with New Ulm Gold.

Felcyn and Meyer led the way for Marshall with a pair of hits and two RBI apiece while Jacobson added two hits and an RBI and Pearcy had three hits and an RBI.

Marshall coach Chace Pollock said their key on offense was their ability to take advantage with good baserunning.

“We hit the ball hard and were able to run the bases really well,” Pollock said. “I thought the guys did a great job, especially on second base with a base hit and getting a good jump coming home and anticipating that. I was happy with the way we ran the bases.”